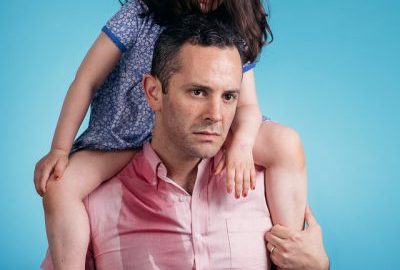 Adam Lazarus is an approachable, involving performer. He bounds onto the stage wearing fairy wings and shows us a dance his 5-year-old daughter choreographed for him. You’re sure from the moment Daughter begins that Lazarus is a nice guy and he’ll tell you the truth. So you go with him. But you’re at least somewhat wrong about at least one of those things.

He dances to “Everything is Awesome” and he’s just so likeable and relatable and good. He tells a story about throwing his daughter into her bed and holding her down after months of sleepless nights and repeated disobedience and you think “boy, that’s a brutal story; how brave of him to share that with a crowd that will surely judge him for it; this guy is so open and self-aware about his flaws and mistakes; it’s refreshing”. But it gets worse. And worse. And worse. And people are walking out and women are crying and at one point he looks straight at you and counts you as part of the crowd by the number of breasts you’ve contributed to his view.

This is not Adam Lazarus. It is, at least some of it definitely is, but not all of these stories happened and not all of these thoughts are his thoughts (despite what the show wants you to believe; check out his excellent article in Intermission Magazine for some clarity). But they’re somebody’s. They’re lots of people’s, lots of men’s. Adam Lazarus and his collaborators (Ann-Marie Kerr, Jivesh Parasram, Melissa D’Agostino, Kate Alton, Richard Feren and Michelle Ramsay) insist that those thoughts not be private anymore and that those stories not be swept under the rug of “he’s not usually like this, you shouldn’t have provoked him, it’s just a guy thing” excuses. Lazarus offers himself up for sacrifice in his efforts to display and, in doing so, combat toxic masculinity. He shows himself as the bad guy by telling his worst stories and making the worst stories his own.

Daughter is the scariest show I’ve seen all year, as dangerously engaging (and genuinely funny) as it is brutally visceral. It hurts because we trust him, because that first scene tells us Adam Lazarus is so obviously “one of the good ones”. But ingrained aggression and systematic objectification and fear of women isn’t just the purview of bad men; it’s cultural, taught to them the same way we learn not to speak up in class or go too long without shaving our legs. Even the nice guys (the best guy I know once told me that “all men are players until they meet a woman good enough to not play”), even the artists (take one look at the stories of assault at Fringe festivals this year, its harrowing), even the sweet dads who wear fairy wings and dance with their daughters. Even Adam Lazarus.

There are three performances left of Daughter– Friday, Saturday and Sunday- get your tickets HERE.