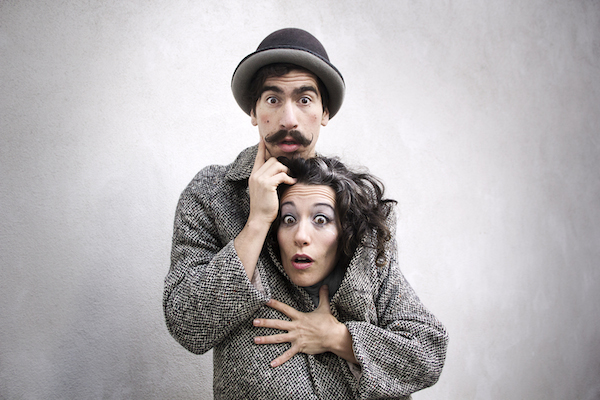 Falling Awake (A+)
Falling Awake is the type of zany show you want to see early in the festival, so that you can have it in your back pocket for when you’re asked for a recommendation. The performers are delightfully charismatic and their show is a comedic masterpiece. A mix of physical comedy genres, including some brilliant mime work, Falling Awake takes you on an uncanny journey to the depths of a surreal dream state, then delivers you safely back again. This show is 50 minutes of clever sight-gags and unexpected twists, but not at the expense of truly connecting with the audience over real human moments. Falling Awake is a delight and shouldn’t be missed.

Exterminating Angel (A+)
Inspired by the Bunel film of the same name, Exterminating Angel is beautifully dark. Presented by Alysa Pires Dance Projects, a contemporary dance company that aims to make contemporary dance more accessible, it is notable that “accessible” did not mean “dumbed-down”. The choreography was intelligent and intricate, while the dancers interpretations were flawless and articulate. As the show progressed and polite dinner conversation gave way to primal undercurrents the audience was held captive by the evocative imagery and movement. This is a much buzzed-about show, and it is much deserved. This also, is a can’t miss show.

Evolution/Mr. Truth Double-Bill (B)
As a double-bill, the pairing of Evolution with Mr. Truth sets them up as unbalanced companions, though perhaps that is what is great about a double-bill… a bit of variety for everyone’s tastes?

The first performance is Evolution, a dance duet that is both beautiful and strong if not a bit on-the-nose thematically. The dancers each had a fluid precision to their movements that paired nicely together. The early part of the piece had the dancers rolling back and forth across the stage to a soundtrack that brought to mind a dystopian field, as the piece progressed though it became apparent that the title was not hinting at imagery that would be left up to the audience to interpret. The dance demonstrated the process of evolution, so no surprises there, though there were a few nice moments of connection.

Mr. Truth in contrast, read as a sex-positive feminist blog–on stage. A show about missed connections and the desire to be true to oneself. Not unlike a Kevin Allison Risk! podcast, personal stories of sexual proclivities and kinks are shared, for a laugh or to shock or titillate. Using short skits and threading a couple storylines through them, this two woman show animated multiple characters in a masterful performance. The work has clever and unexpected moments, but it did take me a bit to get on board. Ultimately, this is a good-time show, it checks all the boxes of what a Fringe show “should” be, subverts gender norms and sexual stereotypes, bare-asses and all.

Wireless Connection (B-)
I have never been so blown-away by the power of a choreography and performance, while lacking so much interest in the thematic content of a show. There were so many wow moments in this work, I mean some truly breathtaking dance articulating very interesting choreography. Unfortunately the power of the dance was overshadowed by a conceit that I found banal. It could be that I have just soured to the message that our cell phone/social media “addictions” need to be checked. Or that it is a bit insincere to give a sixty minute finger wag to your audience about the morality of technology-induced disconnection, when we have all voluntarily put our cell phones down to experience a live dance performance together. The theme aside, the dance was buried under a soundtrack and multimedia choices that distracted rather than enhanced the movement. And so my review is mixed because on the one hand it just wasn’t for me, but on the on the other hand, it is some of the strongest and most interesting dance I have seen.