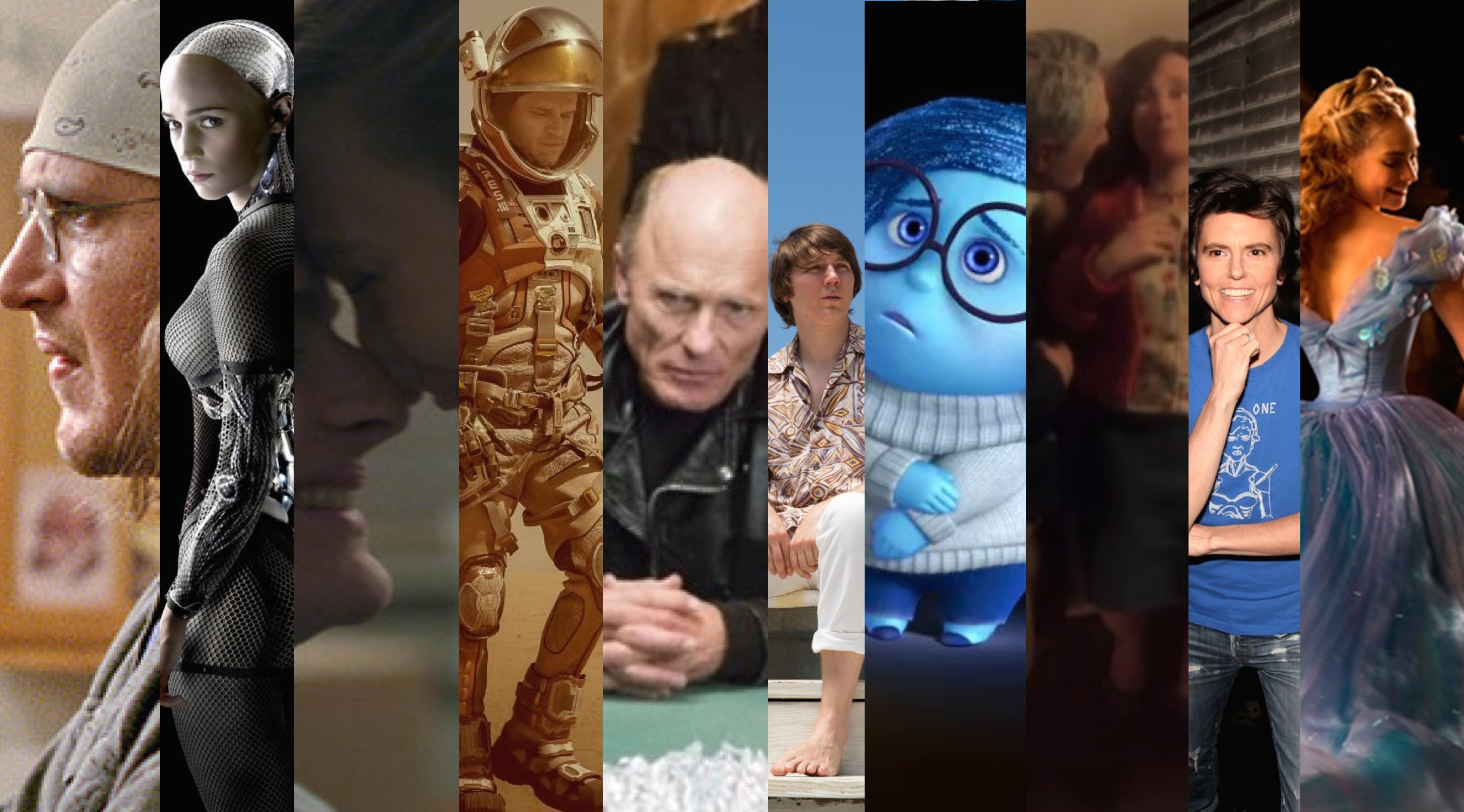 Here we are, we’ve made it to the end and all that we’re left with are the ten films that touched my heart and stirred my mind the most in 2015. I love how diverse this group is (in medium, in genre, in style, in size, in point of view) and, though it likely only includes one Oscar winner (Best Animated Feature), it represents the best of 2015 to me.

1. The End of the Tour
James Ponsoldt’s quietly masterful direction of this portrait of genius at rest reveals his wise faith in Donald Margulies’ beautifully meandering screenplay and the intensely connected performances from Jason Segel and Jesse Eisenberg. An adaptation of David Lipsky’s book chronicling the time he spent interviewing David Foster Wallace in the final days of his Infinite Jest book tour, The End of the Tour is a portrait more than a story, an examination of two bright men who stand in threatening contrast and reluctant mutual respect. Eisenberg, in particular, is enthralling as Lipsky, a lesser writer who, as the observer, is every bit as psychologically intriguing as the instant legend he is observing. Jesse Eisenberg is one of those actors who never quite leaves himself behind- Lipsky shares a distinct voice with Zuckerberg, his smart/nervous manner all too familiar- but his command of a character’s internal life is second to none. The growing empathy in the way he listens to Wallace, the squint of his eyes, the way his omnipresent cigarette seems at once like a nervous habit and an extension of his own hand- the nuance Eisenberg brings to his performance as Lipsky is lived-in and entrancing. Segel is trying harder as Wallace, but it’s also the harder role. Margulies’ key move here is to recreate large swaths of theoretically uninteresting dialogue, letting the audience play fly-on-the-wall as two great minds discuss everything by talking about nothing in particular. Wallace’s fatal insecurities and his feelings about television share space as the two men navigate their cramped, inelegant, competitive dance, each searching for the truth from the other. The sound editing is searing (the click of Lipsky’s recorder is deafening), the direction intriguing (we gaze through Wallace’s glasses as he struggles to verbalize his point of view; Lipsky literally sheds light on the dark room where Infinite Jest was created) but focus is never pulled from the words and performances at the heart of the film. It’s a film about genius, trust and obsession, journalism and fiction, friendship, isolation, competition, depression, expression, betrayal, pretension, doubt, and the fear of being a fraud. But it’s really just two people eating MacDonald’s and shooting the shit.

2. Ex Machina
The intellectual grandeur of this sci-fi masterpiece from writer/director Alex Garland makes it one of the definitive achievements of the year. Balancing philosophy, technology, psychology and pure human emotion, Garland’s creation is packed with more evocative insight than anything else I saw in 2015. It also features a trio of outrageously good performances from season breakout star Alicia Vikander, perennial favourite Domhnall Gleeson and Oscar Isaac, whom I maintain is the greatest actor of his generation. If you only ever see one 2015 film, no matter who you are, I think perhaps it should be this one

3. 6 Years
I’m a sucker for tiny, personal films of indefinable genre. 6 Years– yet another Duplass-produced gem that likely never would have made it to the screen without their game-changing approach to financing- is the ultimate tiny, personal film of indefinable genre. Directed with remarkable detail by Hannah Fidell and made glorious by bare and beautiful performances from Taissa Farmiga and Ben Rosenfield, 6 Years is the sort of gut punch film experience I admire most.

4. The Martian
This film is like Gravity if Gravity had been an actual feature film instead of a prolonged showcase of the latest in film technology. This film is like Interstellar if Interstellar had had a sense of humour, any understanding at all of real human behaviour, and an editor. A delicate cross between popcorn flick and prestige saga, The Martian has shape, momentum, technical ambition, storytelling clarity, a clever, quotable script, a reverence for cinematic history, something to say about its current time and place, and widespread character development that gives every member of its sprawling, top-notch cast something interesting to do. Jeff Daniels is a little too Will McAvoy but Chiwetel Ejiofor is sublime, Chastain is Chastaining, Damon is Damoning (and easily carrying his many many solo scenes), Donald Glover plays an aerodynamics genius (obviously) and there are multiple conversations between Michael Pena and Sebastian Stan (which has heretofore only happened in my dreams). The Martian is every great thing you ever imagined a collaboration between the Cabin in the Woods guy and the Gladiator guy could be.

6. Love & Mercy
This was the first film of the year that I really loved. A two-timeline biopic about troubled genius Brian Wilson, it’s a lovely character portrait anchored by brilliant performances from John Cusack, Paul Dano and Elizabeth Banks and also a terrifying exploration of genius and the ways it can destroy a man from both the inside (the inspired sound editing takes you into Wilson’s overworked mind) and the outside (Paul Giamatti represents a world seeking to capitalize on Wilson’s weakness). It’s a love story, an entertaining history piece, a cautionary tale and a mental health drama rolled into one.

7. Inside Out
This film is at once everything Pixar does well and everything we’ve been waiting for it to do. Zooming in on the mind of a young girl as she approaches puberty, the Pixar team and their pitch perfect cast have created their most emotionally poignant story since Toy Story 3 and possibly their most important message ever. The insightful juxtaposition of globally beloved superstar Amy Poehler as pretty, chipper leader Joy and overlooked character actress Phyllis Smith as always-picked-last Sadness perfectly encapsulates the (universal but also uniquely female) pressure to be happy and perfect and nice all the time. Sadness is one of the great cinematic heroes of 2015- a strange beautiful sentence that makes Inside Out completely indelible.

8. Anomalisa
Charlie Kaufman, boy, is there anyone who marries innovation and heart quite as effectively? It’s been over a decade since I first saw Eternal Sunshine and I’m still recovering. Anomalisa doesn’t have quite the same impact but it’s still a beautiful, surprising piece of storytelling. At first I was worried that the stop-motion would feel like a gimmick since the film is ultimately telling a very familiar story about a discontented middle aged white man who thinks he’s found the woman who will save him, until he realizes he hasn’t. But Kaufman doesn’t do gimmick; he uses the animated nature of the film to express his major themes through voice work in a way that wouldn’t work with live actors. *spoilers from here*. The film has only three voice performers- David Thewlis as Michael, Jennifer Jason Leigh as Lisa and Tom Noonan as Everyone Else. The voice casting literalizes that feeling of thinking you’ve found the one- everyone in the world sounds the same to you, until a new voice breaks through the din. It’s a beautiful concept, made all the more poignant by Lisa’s extraordinary ordinariness; she’s only special in the way that everyone is too. We’ve all seen this movie before, but Kaufman, in that way only Kaufman can, makes us understand it clearly by telling it differently.

9. Tig
This moving, inspiring, simply made and remarkably true documentary about comedian Tig Notaro is essential viewing, especially for stand-up fans but generally for all humans. It’s ostensibly about her bout with cancer and the meteoric rise to fame that followed but what makes the film really work is that it fills out the space around those events. Directors Kristina Goolsby and Ashley York capture the spirit of their subject in intimate detail, taking the audience through the loss of Tig’s mother that preceded her cancer and the stirringly complicated love story that came after. It’s as much a beautiful portrait of life as a story of triumph over death.

10. Cinderella
Yes, Disney’s live action Cinderella is in my personal top ten. Yes, I know you’re upset that it’s outranking more popular (Mad Max) and more artistically virtuosic (A Most Violent Year) fare but this is my list and I loved this film with all of my heart and all of my weeping tear ducts. This version of Cinderella is sweet and funny with thrilling technical execution (from the animal CGI to the costume design) and a lovely sense of throwback fairytale fun, but it’s the sincerity of the film’s mantra that really captured my imagination and reminded me that, despite its institutionalized issues, the heart of Disney has always been pure. Above all else, no matter your fortunes or your wardrobe or the size of your waist, try to “Have Courage and Be Kind”.