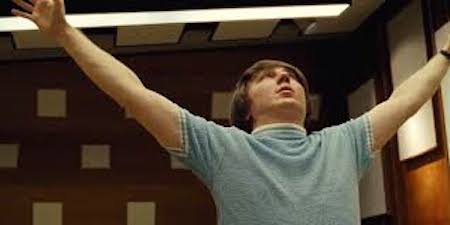 When the epilogue ended and the house lights came up in the movie theatre where I saw Love & Mercy, no one moved. The real Brian Wilson was on screen in unflattering close-up as he sang the title song, live and imperfectly, accompanied by barely a breath of sound from the audience watching the credits roll in split screen. Such reverence is unbelievably rare, achieved here through the perfect combination of a legend’s unimaginable story and an unforgettable artistic rendering.

Music is something of a cultural blind spot for me so I’m not sure how well-known Brian Wilson’s story is but I was certainly glad to have not known it myself before seeing the movie, the truth of it becoming more and more remarkable with every revelatory turn. In case you too are lucky enough to see Love & Mercy without knowing how it ends, I won’t spoil it for you here. Suffice to say that it’s the story of the leader of the Beach Boys- his talent, his torment, those who love him and those who betray him, how vast musical ambition can survive in a commercial medium and how genius isolates those who possess it. It’s about expression, brotherhood, the music industry, mental health, a parent’s power to destroy, a lover’s desperation to save, and how “God Only Knows” came to be one of the greatest pop songs in history.

Directing his first major film, producer Bill Pohlad brings us into Brian Wilson’s experience of the world with an insightful focus on the auditory, at times even diving into or emerging from darkness through the artist’s inner ear. Sound designer Eugene Gearty’s work is extraordinary on every front from the eclectic and often terrifying soundscapes of Brian’s overwhelmed mind to refreshed versions of classic Beach Boy earworms experienced through studio sessions to an act one plane scene captured with such enveloping detail that I felt like my ears had actually popped.

Sharing the lead role in different eras of his life, the genius of the once-in-a-generation Paul Dano is matched neurotic twitch for neurotic twitch and steadying breath for steadying breath by John Cusack in his most indelible performance in years. Superb supporting turns by Paul Giamatti and Elizabeth Banks provide context for Cusack’s recovering Brian while a more diverse assortment of personalities round out Dano’s spiraling world at the height of Wilson’s success, including a beautifully conflicted performance by Jake Abel as Mike Love.

Excellently constructed by screenwriter Oren Moverman and Michael A Lerner, Brian Wilson’s story is one of the most amazing to hit cinemas in quite some time- so grand and brutal and wild that it’s hard to believe it’s real. But it is and it couldn’t have been better told.