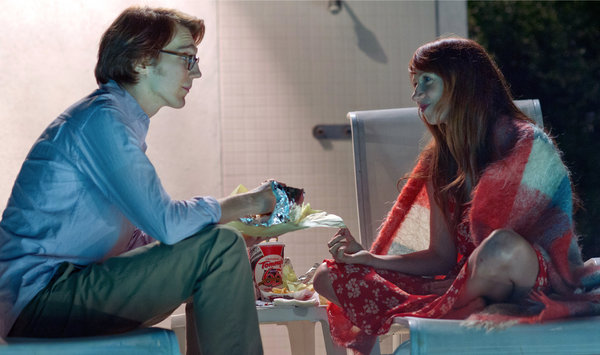 Ruby Sparks was my most anticipated movie of the summer and it was the first time in a long while that I went in with high expectations and had them surpassed. Zoe Kazan’s script is touching, and unique, but it’s also brimmingly hilarious. And she and Paul Dano are hilarious in it. As directed by Little Miss Sunshine’s Jonathan Dayton and Valerie Faris,  Ruby Sparks strikes a balance that only Little Miss Sunshine has quite as effectively in recent years between comedy and depth.

The film’s origin story is adorable and the way that the characters suit their actors makes it all the more lovely. Kazan and Dano have been a couple for five years- her, a gregarious sparkplug; him, a cerebral loner- and while reading her upteenth draft of Ruby Sparks, Dano realized it’d been subconsciously written for them (cue the “awwwww”s). I’ve long loved Paul Dano; he’s both one of the best actors of his generation and one of the most overlooked. But now I love him more. Yes, for his superb performance as Calvin- Ruby Sparks’ neurotic and hermetic wunderkind-turned-struggling author who writes his dream girl only to find that she’s come to life- but also because he has fantastic taste in women and that makes me think even more highly of him.

I’d never heard of Kazan before this film but she’s now one of my favourite people in Hollywood. She’s sweet and funny (not to mention heartbreaking) in the title role- that of Calvin’s fantasy girl- but mostly it’s her screenplay that has me in a tizzy. On one hand, it’s a well-drawn picture of self and society-imposed terror and the sympathetic dichotomy of an exceptional introvert thrust into then pushed out of the spotlight. Calvin is a character perfectly suited to Dano (he nails the anguish, the hope and the comedy all expertly) but Kazan’s portrait is so sharp that it’s hard to imagine any performance not getting straight to the heart of the guy. On the other hand, Calvin himself and all that he represents take a backsteat to an even more interesting examination of the quest for perfection and the ways we seek to control each other. When Ruby first appears, Calvin swears the he will never write another word about her, he’ll just be with her as she is. But as Ruby’s autonomy starts to pull her away from Calvin, he goes back to the typewriter. He makes her sad, he makes her happy, he makes her French, and nothing makes her better. The film has beautiful metaphorical ramifications and says more about human relationships than all sorts of movies with more “grounded reality” cred than a romantic comedy about a writer and his character. Kazan also takes the Manic Pixie Dream Girl trend and tips it on its head. Calvin writes Ruby as “a bit of a mess”- she’s cutesy/wacky and has very bad decision making skills- and he idealizes that immature outlandishness. But as his lovably simple brother Harry (Chris Messina in his best role yet) points out, “that’s not real” and eventually quirk wears.

The film is fleshed out with a cast of characters not as meticulously constructed as Calvin (and, in a different way, Ruby) but fully entertaining. The aforementioned Harry is probably my favourite  in his struggle to understand his impressive oddball of a brother and keep him from self destruction. Annette Bening plays their mother- a woman who used to play golf and has since gone full on hippie- with offbeat warmth. That character doesn’t get a lot of play, but the small detail of Calvin saying “it’s like she’s been brainwashed” informs his story immensely. His mother conforms to the man she is with (with Calvin and Harry’s dad, she was preppy; with Antonio Banderas’ goofy bohemian, she’s a goofy bohemian), the real-world reflection of the Ruby Sparks situation. Calvin’s slimy mentor (Steve Coogan) is simplistic (though Aasif Mandvi as your lit agent? Win) and some of the therapy scenes with Elliott Gould are over the top (was it really necessary for Calvin to crave a stuffed animal? He was so relatable up to that point!) but Ruby Sparks is otherwise as close to perfect as a film lampooning our societal and personal ideals of perfection can be. It’s a laugh-out-loud, cry-til-it-hurts, can’t-get-it-out-of-your-head movie and I couldn’t recommend it enough.