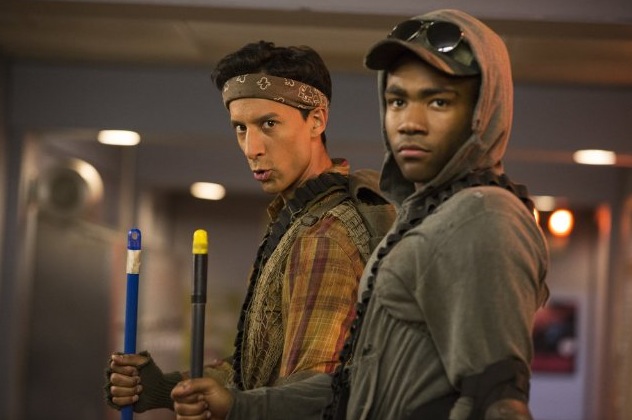 Looking Back at The Fall of Troy

Community is back to its comedic roots, but not without some key losses along the way. Last season, we lost Pierce (Chevy Chase) and this season, Pierce died and took his former roommate Troy (Donald Glover) with him. Not literally with him since Troy’s till alive and all, but Pierce’s will offered him an opportunity to be what he always wanted, rich. That opportunity came with a price tag though: Troy has to sail around the world. And thus begins Troy’s departure from the show and our hearts. Before he goes, Abed gives him an extra special send off, prompting a classic, school-wide game of Lava.

Throughout the episode Britta Brittas everything by trying to get Abed to admit he’s upset about Troy leaving. She finds Jeff and Annie, who form an alliance to win the prize of Abed’s comic book, valued at $50.00. They spot chairs at the end of the hallway, only to be stopped by the Locker Boys. In rolls Abed and Troy followed by Buzz Hickey to scare off the boys. After plowing down the boys, Hickey goes after the study group who get away by abandoning Britta.

The study group then finds Shirley, who has made herself a makeshift island, aptly called Shirley Island. Abed believes Shirley Island is home to “the Orb” and encourages Shirley to reveal its location. The group tell Shirley that Britta is dead, only to be proven wrong when she enters the cafeteria with a group of chair walkers. The walkers attack Shirley island but some fall after Leonard sprays them with popcorn butter. Soon, Britta and Jeff enter into a duel of toilet plungers and poorly executed knock, knock jokes until Jeff gets bested. Not by the jokes though, Britta once again Britta’d those.

Troy and Abed escape from Shirley island in the orb. Which turns out to be a giant hamster ball that they ride all the way to the basement. Along the way, Britta jumps on the orb and cuts a hole in it, but it makes it far enough for the boys to roll down the basement stairs and escape by holding onto the shelves. Troy think the game should end, but a heartbreaking speech from Abed explains that the game is real to Abed. The lava real because Troy is leaving and Abed can’t let go. When he finally does let go, he won’t come back to life without being cloned. Troy realises that maybe he isn’t ready to let go either, so Abed suggests cloning him as well. Troy lands in the lava and I spend the rest of the episode wondering how “ The Fall of Troy” was not the episode title.

In the end, Troy departs for his adventure with chaperone Levar Burton. Clearly Pierce still didn’t listen, but like a picture, clone Troy couldn’t disappoint his idol and the two depart while Troy wonder why the members of the Enterprise never actually went to a star.

The departure of Donald Glover is going to make for an interesting group dynamic. It’s hard to imagine Abed without his other half, but perhaps the show will use the opportunity of a lost member to help grow the other characters. They could even choose to use the recurring characters more, because I can’t think of any opposed to seeing more Jonathan Banks and John Oliver.