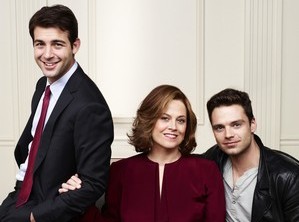 Political Animals‘ 6-part season was great and if it doesn’t get a second season, I’ll be sad, but it’ll still be a great mini-series that got to the heart of its humans while completely leaving pretension at the door. The great James Wolk and Sebastian Stan got better and better each episode, Ellen Burstyn stayed awesome, and Ciaran Hinds managed to win me over (at least a little bit) to his flawed former president Bud. Anne (Brittany Ishibashi) improved too. And so did Susan (Carla Gugino). Actually, Susan became one of the best characters. Of course no character could ever surpass the Hammond boys (Wolk and Stan) but Susan became pretty great as she fought her editor and the manipulative upstart blackmailing her way onto Susan’s byline. Oh, and she slept with Douglas, which I took less as a professional overstep and betrayal and more as an endorsement for her taste (because Doug, while fascinatingly flawed, is Great). I joke, it was actually all sorts of wrong on both sides, which was fully interesting.

Meanwhile, TJ got the money for his club from Doug then OD’d at the opening. That sounds ridiculous, but it was the climax of a moving story involving TJ’s relationship with a closeted Congressman and how it was used as political leverage by Dylan Baker’s slimy VP Fred Collier. The Congressman, Sean Reeves, was played by Dawson’s Creek‘s David Monahan and his chemistry with Stan was palpable. That, combined with TJ’s statement that the last time he was happy was when he was with Sean, really sold the relationship and justified even TJ’s most dramatic stories (all of which were beautifully played by Stan). TJ’s recovery also brought him back to his grandmother, opening the show up for some of Burstyn’s best work and Stan’s loveliest scenes.

Adrian Pasdar’s President Garcetti also stepped it up as the season progressed, so that by the time he *super spoiler alert* died in the finale I was incredibly sad to see him go. Part of that is because by the time we got to the finale I had severely cooled on Elaine Barrish and Garcetti was the only character with any power over her (aside from, maybe, her mother). Elaine as a character was fine- though not as interesting as her family- but the real problem was that I really don’t think Sigourney Weaver was very good in the role. Yes, I know that she’s a big deal and that most critics think she’s slumming it doing TV (and especially a family soap-y series) but Sigourney Weaver is the only actor on Political Animals who feels at all static and like she’s not bringing anything to the table to improve on the character Greg Berlanti created for her. She’s repetitive and forced and seems like she’s coasting. In a cast as superb as the one she was in (and hopefully will be in again if USA has any taste in programming at all), that’s just not gonna fly.

Season Grade: A
Finale Grade: A-