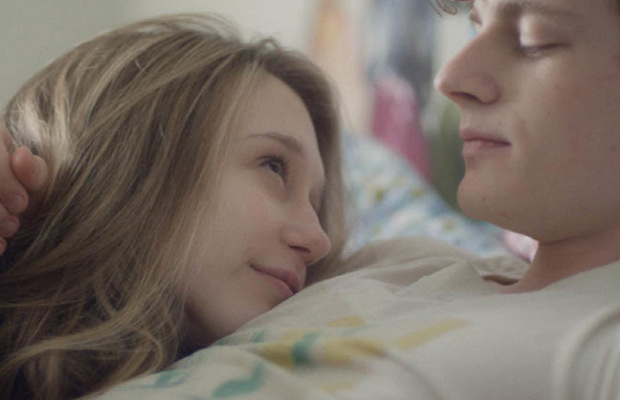 The Duplass Brothers and their unparalleled taste as producers have facilitated yet another extraordinary cinematic moment by partnering with an up-and-coming writer/director in the form of Hannah Fidell. According to Wikipedia, Mark Duplass approached Fidell about writing a film that touched on domestic abuse and, rather than give us a horror show cautionary tale or a feel-good triumph over adversity or the expected film about a hero and a villain, Fidell came up with 6 Years– a messy, gorgeous, soul-crushing, romantic, scary, honest account of two young, dumb, well-meaning human beings trying to make it through the world together.

6 Years is built on the same improv-heavy mumblecore model that led to such amazing things as Your Sister’s Sister, The One I Love, Happy Christmas and so many more. The outline-over-script approach can veer into dangerously direction-less territory easily (sorry, Digging for Fire) but Fidell as a writer’s sharp focus on her two lead characters and Fidell as a director’s thrillingly insightful attention to detail keep 6 Years grounded and faultlessly impactful. There isn’t a single wasted frame in the film’s tight 85 minutes; if the camera is lingering on a silent shot or a blackout is dragging on for what feels like an eternity, it’s because Fidell is trying to tell you something. Everything- from contrasted sex and sleeping positions to the choice of a straight-haired actor in a key supporting role to the green smoothie that subtly Chekhov’s Guns its way into the film’s third act- is a meticulous choice that makes 6 Years deeply re-watchable and analyzable beyond its initial emotional wallop.

Fidell sets up a story at once heartbreakingly recognizable and disorientingly larger than life where true, enviable, unwavering love and improbable opportunities intersect with pettiness, defensiveness, terrifying fury and the simple, unromantic, unfair realities of life. Even with very little development of most of the supporting cast, Fidell draws a crystal clear portrait of her two subjects, the reflection of the couple through their respective social circles’ eyes revealing cracks that Dan and Mel themselves refuse to believe are there- infuriating pet peeves, diverging goals, discomfort around each others’ friends, latent mistrust, a subtle but damning maturity gap. Over the course of the film, we see them hurt each other over and over again. They lie to each other (Dan rewrites history without even blinking) and strike at each other (Mel is particularly volatile, which leads to some of the film’s most searing insights as gender politics and the shadow of Mark Duplass’ original pitch to Fidell loom large) but, without fail, the moment the wound feels real they fly into each others’ arms for the familiar, unconditional comfort they’ve given each other for six years, the previous moment’s devastation eclipsed by straight-from-the-heart concern. They’re the best and the worst couple in the world, capable of saving and devastating each other in equal measure. They’re Romeo and Juliet if all of the play’s external conflict were coming from the same place as the sonnets.

Fidell’s work here is mesmerizing, a jostling mix of human insight and technical storytelling, but literally none of it would translate without the extraordinary performances from Ben Rosenfield and Taissa Farmiga. In their second film together, 23 and 21-year-old Rosenfield and Farmiga navigate the tricky waters of dramatic improv beautifully, establishing a relationship realistically lived-in and organic to the point where the viewer can’t question for a second that they’ve spent a quarter of their lives together. Their chemistry is comfortable but electric, their flaws grounded in believable (if infuriating) character detail; nothing is ever forced, nothing is ever false, no matter how dramatic the moment.

It’s a hard film to watch. It’s beautiful and moving- sometimes sweet, occasionally funny, often romantic- and the stars (especially Rosenfield) are wildly charming but it’s hard, a little because it’s harsh and sad but mostly because it’s true.

6 Years is on Netflix now. Watch it alone. Do not pause. Do not multitask. Just live through it and make it to the other side.