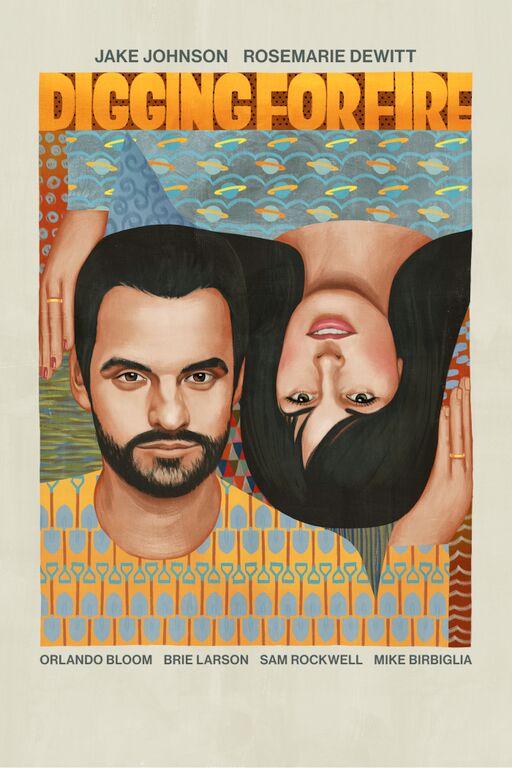 Digging for Fire belongs to that indie film niche featuring relatively well-to-do 30-somethings who are unhappy with their lives. These kinds of movies are more moment than plot driven. Some people really enjoy this genre. Full disclosure: I am not one of those people.

Tim and Lee stay at Lee’s wealthy client’s house as a mini-vacation. Tim finds what he thinks are human bones buried in the backyard. He spends the weekend “doing taxes” (digging for more bones/partying with friends), while Lee seizes the opportunity for some alone time. They have a kid, who they can conveniently leave him with Lee’s parents, enabling the leads to around on their journeys of self-exploration without the burdens of actual parenting. There was some brief, pointless tension over whether or not Tim and Lee should let Lee’s parents pay for private school for their son. But other than that, you could almost forget that Lee and Tim are in fact parents.

This might seem like needless criticism, but there is an annoying practice in film and TV where people are given kids who serve basically as accessories. How else do you describe Tim and Lee’s situation? They bring their son with them, have a few family moments and a few debates on public vs private education (that’s briefly touched on but never resolved and is ultimately pointless). Then the kid disappears so his parents can go on their separate adventures of getting drunk with strangers.

One of the film’s strong points is that Tim and Lee’s relationship when they are together seems very real. The dialogue combined with Jake Johnson and Rosemarie DeWitt’s chemistry make it believable that they are a married couple. Sure, they’re not perfect, but they’re working on their relationship. And that’s fine. They’re past the madly in love part of their marriage and are comfortable with each other. They aren’t part of some great, sweeping romance, they’re two, normal people in a normal marriage.

Both Lee and Tim spend a significant amount of time flirting with a stranger. In Tim’s case, it’s a girl (Brie Larson) his friends bring over to the house to party with. In Lee’s case, it’s a chivalrous man who stops a drunk from harassing her in a bar. Lee’s handsome stranger is Orlando Bloom, so okay, I get why she’s tempted to forget about her husband. Spoiler alert: Tim never even did their taxes that he was supposed to be finishing. I bet Orlando Bloom did his taxes. He did his taxes, then spent the evening charming the hell out of Lee, because he is a Mysterious Handsome Stranger, there to be a fantasy.

There’s really no urgency in Digging for Fire. Nor are there really stakes. Tim and Lee have a comfortable marriage. It’s not terrible, but it’s not a fantastic one either. (If it were a fantastic one, neither one of them would be running around indulging in their self-centeredness for a weekend, while lying to their partner). If they stick together, they’ll probably stay in that same, comfortable place. Because Tim and Lee have communication problems, so whatever reasons lie behind their dissatisfaction, they probably won’t be addressed. And if they went their separate ways, they would probably be fine too.

The film was also burdened by trying too hard to be random and deep. Strangers spew out their inner ramblings in a way that they generally don’t in real life. Some were interesting tangents, others were just gibberish. Another thing that seemed like it was trying too hard was Anna Kendrick’s character. She initially showed up at the house to party with Tim and his friends, and later was a friend of Orlando Bloom’s character, stitching him up after an altercation he had at a bar. Kendrick was underused in the film- she’s capable of a lot more than being a pretty hook-up of a friend of the lead. Maybe the point of her also being friends with Bloom’s character was to comment on how it’s a random, small world, but it felt a little forced. Nothing came of it, and it was the only random connection like that in the film, so it’s not really clear what the filmmaker was trying to say.

This all sounds very critical, but let me reiterate, I’m not the usual audience for this kind of movie. I didn’t feel strongly about it either way, but it’s easier to detail what didn’t work, than to expand on, “it was fine”. And it was. Johnson and DeWitt are both likable actors, and even though their characters were self-involved and not particularly memorable on their own, being portrayed by talented actors made them interesting enough to watch for a few hours. Digging for Fire wasn’t a very challenging film, but it had a languid pace that was nice to follow. It’s a nice film to watch, nod along to for a little bit, then continue on with your day. If you like indie-films about self-discovery that are much more moment than plot driven, then you’ll probably like Digging for Fire. If you don’t like those kind of films, you won’t necessarily hate Digging for Fire. You’ll probably think it was fine. Not terrible, not wonderful, but fine.