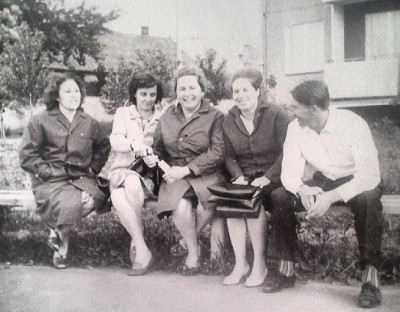 Seams (B)
An excellent cast and interesting subject matter elevate this somewhat dull, badly paced play about theatre seamstresses in 1939 Russia. Ewa Wolniczek is particularly memorable as Marina, a young woman with too much fight in her. Sochi Fried and Elizabeth Stuart-Morris share compelling chemistry as would-be lovers in a terrifying world where the walls have ears. The lone man Jesse LaVercombe plays Anton with sympathetic softness, his fondness for Krystina Bojanowski’s honest and vibrant Ira furthering his likeability and his tragedy. Caitlin Robson rounds out the group with a strong, maternal performance as the younger iteration of our narrator Frosya. The older version is played by Clare Coulter, inexplicably using the Russian accent everyone else has chosen to leave out (I suppose she’s speaking in English with a Russian accent while the others are speaking Russian with no accent?) with no visual or performance clues to help us detect which of the characters is her younger self. The narration creates distance between the young characters and their audience, providing a frame to Polly Phokeev’s play that doesn’t do much to improve it. Coulter’s performance is melancholically cheeky but I would have rather heard less of her hindsight and more from the women in the thick of it.

MacArthur Park Suite: A Disco Ballet (B)
The title of this production is actually the title of part two of this double bill of really entertaining but awkwardly executed dance pieces. The MacArthur Park Suite is the absurd, fun, brazenly silly entrée that comes after a quieter and more emotionally exposed appetizer set to “I Feel Love”, another hit by the disco muse who lives at the centre of the production- Donna Summer. The show smartly begins with the six performers sitting on the edge of the stage, talking about love. They’re a beautifully diverse bunch, in both demeanour and philosophy, which gives their solos in the first act an intriguing breadth. The second act is more theatrical and less personal, losing some of the honesty but showcasing the flamboyant fun that makes the production memorable even if the choreography and technique aren’t at a level to compete with the more serious dance entries at SummerWorks. The production flies on the back of Ryan Hinds’ infectious charm, Raya Facey’s engrossing physical performance and Nicole Rose Bond, who remarkably embodies both those qualities as the production’s most interesting emotional performer and its best dance technician. Created by Hinds and co-choreographed by Hinds and Bond, MacArthur Park Suite could stand to be a bit more ambitious dance-wise but it’s a clear-sighted, full-hearted piece of work that apologizes for nothing in a really empowering way.

Deceitful Above All Things (B-)
There are moments in this period drama about early Quebec that really simmer- mostly the romance between Imogen Grace’s quietly fierce Marguerite and Garret C. Smith as the sexy half-Aboriginal woodsman who Absolutely Cannot (reasons not adequately explained) bring her with him to make a home away from her puritan neighbours after he gets her pregnant. A parallel story of forbidden love between a farmer’s wife and a Jesuit priest is less interesting despite containing almost the exact same beats. A clever directorial gimmick or two (gee, I wonder what’s in that chuck of ice that’s melting over on stage right!) doesn’t do much to compensate for the text’s many dull passages or the abysmal pace at which they’re delivered, making it difficult to keep your eyes open (one audience member was actually snoring at the performance I attended) but there are also moments (thanks entirely to Grace and Smith) when it’s hard to look away.

LOVE+HATE (B-)
This “song cycle” by charming pop group The PepTides is really not a piece of theatre. It’s an amusing performance featuring some really talented singers (and bored-looking musicians), but it’s a concert, not a thematically rich piece of musical theatre (or whatever SummerWorks has decided to call it to justify its inclusion in the theatre series not the music one). There are a few disconnected scenes between songs but they feel really unrelated to the music that makes up the heart of the performance. A true song cycle doesn’t even need these few scenes to be considered theatre but the form does require story and character-based songwriting when what the PepTides offer up is basically just quirky pop songs (most featuring indecipherable verses around a chorus made up entirely of the song title repeated over and over). A proper PepTides concert is probably a lot of fun- they’ve got great energy, wacky wardrobes and killer pipes- but, entering LOVE+HATE and expecting a piece of theatre, the audience at 4:30 on a Sunday afternoon is just not in the right space to catch PepTide fever.

The Tall Building (B-)
I have a very simple set of criteria when it comes to good theatre: make it coherent, make it honest, make it mean something, avoid blackout set changes. The reason these four very important things are listed in that order is that the latter things don’t matter without the former. A playwright & director like Jill Connell can have all the lofty ideas in the world (isolation, innocence, identity!) in her quest to make her play mean something; a clever set & lighting designer like Joe Pagnan can give the play a thematically intriguing look while facilitating a world without infuriating blackout set changes; a performer like Molly Flood can ground her character Sulla in as much honesty as the words on the page will allow… and if it isn’t coherent, none of that really matters. The Tall Building is all over the place; it’s thematically muddled, the characters never behave in relatable ways, and I never once had any idea what was happening in the story (or if there even was a story). I didn’t know where (or when) we were, what was going on or, most damning, why I should care. I can’t give The Tall Building that terrible a grade because it quite effectively meets three of my four key criteria but it misses where it matters most.

In Case of Nothing (D)
When I annotated my SummerWorks program, I was disappointed to find myself dolling out very few of my usual “must-see” asterisks. In fact, this year I only had one (based on the play description alone, keeping in mind that I’d already seen the genius An Evening in July when it played at Fringe so it didn’t count). In Case of Nothing was the one play (in the entire festival!) that the description led me to believe might be truly brilliant. It’s a two-hander that, theoretically, blurs the line between what’s real and what’s not (making me think of my favourite production from last year, the trippy and beautiful A Quiet Sip of Coffee). The blurb ends with the line “It’s about nothing… except that Nothing is definitely a thing”, a line that suggests a world of possibility and the sort of subtle, complexly genre-less storytelling that I love more than anything. But this infuriatingly slow and pointless play actually appears to be about nothing. Or at least nothing is the sum total of what it managed to make me care about. The performers are awkward and forced with less than zero chemistry; the dialogue is absurdly pedestrian and the characters completely unlikeable. I wasn’t expecting a real plot so its absence didn’t faze me but I would have appreciated some well-developed themes or complicated interpersonal dynamics. Instead, nothing, but this nothing is definitely NOT a thing.