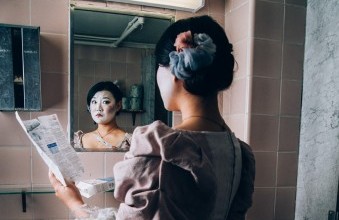 An Evening in July (A-)
The outdoor square and refreshment room of St. George the Martyr Anglican Church in Grange Park are currently littered with recognizable objects from a bygone era: a Country Life magazine from June of 1963, a dead carriage clock, a hippy-ish Dream Interpretation manual. When we’re first allowed past the gates, piano music jauntily backgrounds our investigation of the St. George area, and drinks are sold at an indoor bar. I’m willing to bet that this is the only play at Summerworks which allows you the chance to read excerpts from a Masters and Johnson’s-influenced sex manual while sipping white wine and listening to some skillfully played Puccini before the play has actually begun. The introductory exploration nicely sets the tone for the alternately hilarious, dream-like and eerie work produced by Templeton Philharmonic theatre company. When they finally appear (preceded at our performance by a special one-off performance by the talented opera singer Kyra Millan), sisters May (Briana Templeton) and June (Gwynne Phillips) immediately announce themselves in voice and manner as privileged American East-coast women of the late 60s/early 70s who seem entrenched in that era despite the rest of the world having moved on – – – Valley of the Dolls by way of Grey Gardens.

The performers nicely integrate the audience into their story, with many getting a chance to make some minor contribution to the evening (I got to carry around a key for most of the performance before being asked to unlock a drawer containing what, I won’t reveal – – only to say that it acts as an apt metaphor for the sisters’ current state of being). Both Phillips and Templeton are extremely fun to watch, convincingly old-world East-coasters (though what exactly they’re doing in Toronto isn’t clear), each sounding somewhere between Katherine Hepburn and the Target Lady from SNL. Because they are performing all around us, traipsing back and forth between the outdoor square and the indoor space, we get a chance to see the performances extremely up-close, and each actor manage to be both broad enough for far-away spectators and extremely present for those standing right next to them. For Phillips, this often means conveying a slightly loopier energy, while Templeton has some especially strong moments of real despair that is then quickly veiled with frantic charm complemented by a throaty quail that ratchets up and down the vocal scale. Moments of scheduled improv are hilariously accomplished by both actors, as well as their sardonically loyal manservant Robert, played endearingly by Thom Stoneman. The story itself, slowly revealed, is pretty straightforward and predictable, and the play ends a little abruptly. Its gothic tragedy effectively underscores the show however, and it’s this ethereal ambience, as well as the performances, that you’re most likely to remember.

The Marquise of O (a tabloid story for hypocritical times) (B+)
The red light district describes itself in the program for this show as a company that mostly does “plays (& other texts) by dead people in alive sorts of ways.” The mission statement’s blasé tone, which extends to the whole program, had me anticipating a deadpan and aggressively ironic telling of Heinrich von Kleist’s story of the same name. As it turns out however the production lives up to red light’s promise, presenting a vital telling of the original 1808 novella whose occasional insecurities as a script are picked up by its game cast and increasingly frenetic and imaginative staging. As in the original, the play proper begins with a small piece published by the titular Marquise (Rong Fu) in a local newspaper announcing that she is inexplicably pregnant and whether the man in question will deign to make himself known to her. We then hear overlapping testimonials from the main cast of five (the Marquise, her mother (Eve Wylden), father (Richard Partington), brother (G. Kyle Shields), and lover, the Count of F. (Kaleb Alexander)), all dressed in period clothing and who all speak as if they were taking the stand at a contemporary trial. Finally we plunge into the story proper, with the Marquise meeting the Count of F. when he saves her from the chaos of a Russian invasion of her unnamed Italian town, proposing to her and then leaving temporarily with his regiment. During this interlude, the Marquise discovers she is pregnant, but cannot explain how to either herself or her constantly hovering parents and brother. She sets out to investigate what has happened, with predictably troubling results (hint: the culprit may just be the person who keeps bursting into rooms uninvited).

Gillis and Witzel slyly use more modern tropes to emphasize aspects of the novella that comment on the instinct to maintain respectability above all costs in the process of uncovering a case of rape: as in the book, names and places are omitted – – the production crew add a trash-TV *beep* any time they try to specify a person or region (though we’re usually able to make out the full name underneath the beep, according to us the audience a kind of responsibility in being made aware of the facts despite the efforts of an ostensibly neutral investigation). These attempts at blacking out key information serves to protect the reputation of all involved (including the aggressor), allowing the story’s exclusive social world to continue as it always has. Much of the onstage action is filmed and projected live on the walls of the set (video by Wesley McKenzie) – – we get to see the cast milling around backstage before the lights go down (indicating the tenuous line between hard experience and projected fantasies explored by the play), and stark close-ups of the characters as they traipse around the theatrical space. Projected inter-titles listing chapter and scene descriptions keep us in the realm of the novella for this section.

All of which provokes the question: just what era the play is actually set? There are moments throughout where comments made by the characters suggest that the 1808 setting is merely a put-on, a way of negotiating this story and indicating the novella’s tragic timelessness. However, it often feels like Gillis and Witzel aren’t totally sure as to what the barriers are between the characters and the nineteenth century setting, and are mostly just enjoying the ambiguity. Considering the frequently comic nature of the play’s first half, there also aren’t enough moments that take advantage of the competing testimonies of characters – though Fu dominates the storytelling, the whole cast are given chances to offer their perception of events, but their unique perspectives rarely clash, either illuminatingly or comically. The opening night performance I saw also featured its share of shaky moments, with the set (made up of three entrance-ways that come together and split apart throughout) occasionally proving challenging for the cast to negotiate.

A lot of these issues become more difficult to comment on with confidence because of what happens about two-thirds of the way through the performance, when the play magnificently cracks open before us and the whole pretence of the period setting rewinds and collapses as the brutal reality of what has happened to the Marquise takes over. This sequence in particular is beautifully and hypnotically staged, and throws everything that has preceded it into a fresh light – – perhaps the shakiness was on purpose? Without giving too much away, there is a surprise philosophy lecture (Tyler Hagemann, previously acting as stage hand and manservant, is very convincing as a young U of T-ish philosophy prof), followed by references to the “Mattress Girl” Emma Sulkowicz from Columbia University, and explicit discussions of rape culture. Gillis and Witzel are basically putting their cards on the table about what they want to discuss, and the play becomes a touch essayistic in its discussion of its central themes. But the message lands effectively, despite its bluntness, partly as a contrast to the blithe depiction of von Kleist’s story that has preceded it.

Fu is also extremely good at playing both the social restraint of the Marquis as well as her moments of complete shock or bemusement, and she successfully leads the accomplished cast, all of whom deliver both in managing multiple roles and physically hurling themselves around the Factory space. And the staging is truly inventive at times, despite the afore-mentioned slip-ups. Parts of its concept may feel a little under-explored, but this is still a galvanizing work that inventively bridges old and new texts in exploring society’s endless desire to protect the reputation of men.