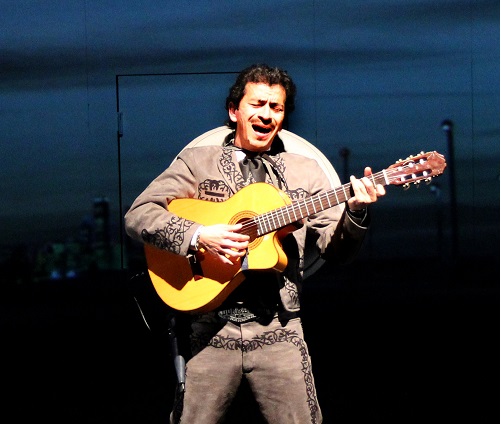 Be sure to check out Part 1, Part 3 and our Full Listing of SummerWorks 2014 reviews.

New This Year: The My Theatre Favourite Discount If your Fringe or SummerWorks show scores an A+ or A, you can cash in on that goodwill with a 50% discount on advertising your next show on My Entertainment World. If you scored an A- or B+, we’ll knock 25% off the ad price. Discounts also apply to all past My Theatre Award winners (50% off), and nominees (25% off) in Toronto, Boston or New York. Email kelly@myentertainmentworld.ca for details on how to promote your next show.

Unintentionally Depressing Children’s Tales (B)
This production is exactly what it sounds like- a series of children’s tales that are unintentionally depressing (to varying degrees). What makes it interesting is the medium through which the stories are told. Or mediums, really. Each of the stories that make up the performance is delivered using a different style of shadow puppetry. Sitting on the floor of the intimate tent set up within the LOT studio space, the audience shifts their attention to a new wall as each new tale begins, told in the soothing voice of one of the cast excellent rotating narrators. My favourite of the stories is about a man whose fascination with the postal service accidentally contributes to the happiness of others. Though the messianic effect of his unconscious goodness leads to a melancholy ending, this story isn’t actually all that “unintentionally depressing”. For titular fulfilment I would turn your attention to the show’s first plot, about a man who helps his community through darkness only to be left alone and wishing for the disappearance of the sun- it’s beautiful, but heartbreaking. The least interesting stories are about cats and ghosts and things just generally less beautifully human than a man who wants to bring light to the darkness. Finding light in the darkness is a major theme this SummerWorks, showing up in various forms across many different shows. It’s a lovely theme, and a relatable one since what we’re all doing, when it comes down to it, is searching for a light in the dark; unless you need the dark because you’re doing a puppet show.

Kafka’s Ape (C+)
What a great concept. In theory, Kafka’s Ape is a searing investigation of the dark side of humanity using an allegory of expedited evolution. In execution, the good news is that the Annual General Meeting concept is very cool and involving. That is the end of the good news. By zeroing in on his Issue Of Choice (in this case private security firms that provide armed security services for the military), adaptor/director Guy Sprung limits the greater themes of Kafka’s commentary about humanity’s failures and limitations as a species. Howard Rosenstein’s bells and whistles performance is broad and shallow, focusing on unnecessary trappings like a Frank Underwood-esque accent rather than on the emotional consequences of Redpeter’s traumatizing journey. The conceptual work here is strong but the execution weak and the focus too political to be appropriately philosophical.

Bitter Medicine (B-)
Olivier and Clem Martini’s autobiographical solo show tells a compelling story that is far more compelling in non-theatrical form. The Martini family’s ongoing struggle with schizophrenia was recounted to beautiful effect through Clem’s words and Olivier’s art in the 2010 graphic memoir (also called Bitter Medicine). Those drawings (and a few key captions) are used again here, projected behind actor Brian Smith as he narrates the story as Clem. The juxtaposition of Olivier’s whimsical Quentin Blake-esque drawing style with the intensity of the story is very intriguing but the third person nature of Clem’s monologue has a somewhat distancing effect that doesn’t do the story justice.

And Now, The End (B+)
I was talking to a friend of mine the other day who saw this new musical and found it understandably depressing. It’s about the end of the world. There’s murder, rape, looting, betrayal, seemingly random romantic pairings and soprano belters who don’t come even close to hitting their (admittedly demanding) notes. But I suspect that the intention was not to show us darkness punctuated with pretty love songs (my favourite: “Kiss Me” and its awesome Bach-y cello part); I think, like many things this SummerWorks, And Now, The End is about the good that survives in (and sometimes even arises from) a landscape of bad. Amir Haidar’s cerebral and enigmatic doctor (strangely just named “Doctor” despite the large role he has to play) is a facilitator of death, until the impending end forces him to open his door to pregnant Inez (Kaleigh Gorka) and the life, in all its forms, that she represents. Hugh Ritchie’s Johnny is restless and clueless (though blessed with Ritchie’s swoony singing voice so he’s not that hard done by) but the quickly approaching End tears down the final wall of secrecy that stands between him and his childhood best friend (Ruth Goodwin). Tamara Bernier Evans and Troy Adams’ delusion-heavy romance is bittersweet at best but more optimistic themes (and lively musical numbers) come in the form of Jeff Yung and Paolo Santalucia as lowly radio employees who take the station’s pre-apocalypse abandonment as their opportunity to start their own show and finally be heard. Jake Vanderham’s music is quite beautiful and a few strong cast members do it excellent justice, emphasizing the cool juxtaposition of the generally cheerful medium of musical theatre with the dark premise. The storytelling (and cast) is imperfect but And Now, The End is the sort of show that reminds you how beautiful imperfection can be.

El Jinete- a Mariachi Opera (A-)
Once I got over the initial shock of this production being un-ironically exactly what it says it’s going to be, I found that it was actually pretty great, showcasing an ambitious and amusing set design (an extremely clever use of projections and video) and featuring a slew of strong singing voices (most notably Alexandra Wever’s soaring, dramatic belt which might be the best voice I heard all SummerWorks). The story is classic opera fare (as advertised) about star-crossed lovers torn apart by a jealous villain who kidnaps the damsel and sings about longing to be loved. The style is traditional, unapologetic, capital M Mariachi (again, as advertised). It took a few minutes for my brain to adjust to the musical form I’m used to only hearing as a punchline in a bad movie but the “classics of the Mariachi repertoire” (best among them “Cucurrucucu Paloma”) ultimately won me over and impressed me with their emotional complexity. Ultimately I think it might actually be the unfamiliarity of the style that allows El Jinete to reach the literal and figurative highnotes it achieves against a plot that is fairly tired. The post-modern world isn’t usually friendly to theatre pieces as earnest as this one but there’s something so jarringly bold about presenting a Mariachi Opera to English-speaking Torontonians that El Jinete is nonetheless extremely winning.