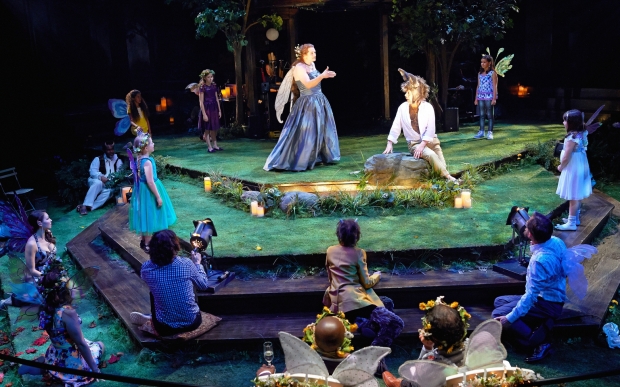 This was an interesting Stratford season because, overall, it felt like one of the weakest in awhile (three dull Shakespeare productions, a dud musical and a handful of uninspiring plays- something went seriously wrong this year). But it also contained my favourite production to come out of the festival since 2011 (Chris Abraham’s joy of a Dream) which joined Peter Sellars’ daring reinterpretation of the text to make up what might be Stratford’s biggest artistic coup in years (the sort of bold thinking that led to the dual-Dream programming hints that new Artistic Director Antoni Cimolino is holding out on us a bit and has a lot more innovation in his tank).

Here are my rankings for this season’s productions:

2. Chamber Dream
Director Peter Sellars told the CBC in a two-part radio profile that the story of a play is like a person’s CV, which has little to do with who a person really is. I wholeheartedly disagree and would have been fairly annoyed by his completely plot-less interpretation of A Midsummer Night’s Dream if it had not been programmed alongside a traditional version (albeit a fresh and fantastic one that by no means is limited in artistry by the word “traditional”). But there was a place, just down the street, where one could see Shakespeare’s story play out with character as defined by their actions as by their words. This freed Sellars up to strip Dream down and use its language without any sense of responsibility to the story or the characters or the context of any given line (sort of like A Tender Thing but without crafting a new story really at all). The effect was disorienting but entrancing with an intense colour palette and soundscape and microphones that created a distancing effect while also allowing the actors to be as small as they wished. Much has been made of Sellars but the real triumph here came from the stunning cast that included the astonishing Sarah Afful (a huge rising star with the festival) as well as a giant leap forward from the wonderful Mike Nadajewski, who has long been underestimated when it comes to non-musical work, and the great Dion Johnstone who tore the stage to shreds with a performance so commanding, seductive and invigorated it won’t soon be forgotten.

4. Mother Courage and her Children
I liked this production more than the average person seemed to. Brecht’s distancing effect has never made any sense to me so what I think this well-paced and confident production did most right was cast three of the festival’s most naturally engaging performers as the emotional lynchpins of the story- Mother Courage’s three children. The goofy, innocent vibe of Antoine Yared’s Swiss Cheese, Carmen Grant‘s serenity as Kattrin, and the trustworthy charm and gentility of EB Smith as Ellif- these things were all I needed to break through Brecht’s obnoxious intentions to do what I always want to do at the theatre: care about the characters and their story.

8. The Beaux Strategem
One of my smart friends has this stupid view that we should stop doing Shakespeare. It’s overproduced, he says. When countered with the public domain argument that is the backbone of most indie companies’ decision to do Shakespeare, he wonders “why don’t they do restoration comedies?”. This, my friend, this is why. The Beaux Strategem- the 2014 incarnation of Stratford’s dedication to finding at least one produceable play per season that bridges the divide between Shakespeare and modern drama- is why. It’s terrible. It had a great cast and lively staging and really truly beautiful costumes and set pieces. But it was terrible. Why? Because Peter Sellars is wrong. The story does matter. And this one is stupid and shallow and dull. I would also like to point out that Colm Feore wooed Sara Farb in this play. She played Cordelia in his Lear in the same season, which is as clear an argument that he was Too Young as one can possibly make.

9. Alice Through the Looking Glass
This play should have been called Alice’s Adventures in Nonsense. Back in Richard Monette’s day, the version starring Sarah Polley was one of the first pieces of theatre I ever saw. I have no memory of whether I liked it or not but I assume that I did. Certainly, the kids in the audience at the 2014 version appeared to be having a grand old time, even before jelly beans started raining from the ceiling (hands down the best gimmick of the year). As an adult, though, it was all just nonsense, and not much of the nonsense was particularly fun or funny. I usually like kids shows but this had no shape and no particularly memorable moments (aside from the jelly beans). It just looked as though everyone was running around the stage in bright costumes occasionally shouting something in bad British accents. Cynthia Dale, at least, appeared to be having impossible amounts of fun as the Red Queen, and that was completely worth watching.

Note: I was unable to attend Christina the Girl King though I thought it looked fairly delightful and I hear that Abbey fellow is charming.