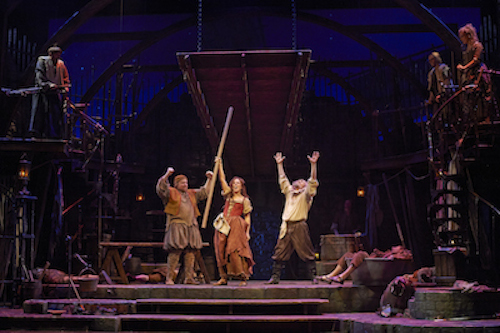 In Stratford: Meh of La Mancha

Fiddler on the Roof aside (because I maintain that it is a great musical even if people like to laugh at it), the Stratford Festival is having some content curation problems when it comes to musicals lately. There are hundreds of decent musicals out there but the festival keeps coming back to outdated, kitschy pieces that challenge no one and do a lot to perpetuate the annoying assertion that musical theatre is a kitschy art form. When it comes to the dance-heavy shows like 42nd Street and Crazy for You (which is technically a new musical but feels very old), I’m willing to tolerate silly characters and plot for the chance to see Stratford’s superb chorus take on a dance break the likes of which are very rarely written into modern shows. But if one of your musicals is going to be “classic”, one needs to be contemporary-ish. And I don’t mean that you need to go with off-broadway wunderkinds (even the famous ones like Brown or Finn); I’m totally cool with Lloyd Webber (most pretentious musical people aren’t, but I love him and Stratford did incredibly well with him in 2010/11); do Stephen Schwartz (in my opinion the medium’s best blender of artistry and commercialism); hell, put on an Elton John musical for all I care (I will freely admit to loving Aida more than most critics combined) but for every Rodgers & Hammerstein, I need at least one Sondheim (more as a metaphor than anything else, I’m admittedly not his biggest acolyte), if only to keep Crazy for You from being the most timely and engaging musical in a season.

Which brings me to Man of La Mancha, a musical that in a million years should not be nearly as silly and senseless as it is. It’s Don Quixote, for crying out loud: world-renowned source material with beautiful, grand themes and indelible characters- how did Wasserman (book), Leigh (music) and Darion (lyrics) screw this up? But they somehow did, and there is nothing even ace leading man Tom Rooney can do to save it (though surely he and director Robert McQueen could at least do something more than what’s currently playing the Avon). There is exactly one song worth listening to in Man of La Mancha, a problem Leigh and Darion seem to be aware of since they repeat it over and over again. The framing device that sees Cervantes frantically acting out the story of Don Quixote while on (mock) trial during the Inquisition is confusing, distracting and trite (who acts out a play as their criminal defence? Literally just people living in frame devices), limiting Don Quixote and Sancho’s stage time and confining the players to a single, overly busy set that showcases very little of the creative potential in the source material.

Don Quixote is the sort of story that makes me cry almost every time (the quest for good, the capacity of man, unconditional love, true service, the triumph of the human spirit!) and I’m most definitely not one of those people who thinks musicals are inherently too silly to take seriously. I was thus expecting to be moved; it broke my heart that I wasn’t.