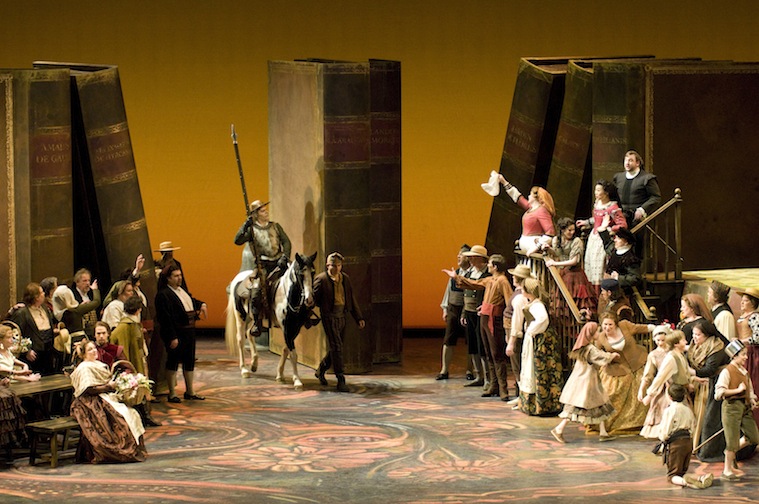 The COC Tilts at Windmills, and Takes Down Giants

It’s with Jules Massenet’s gorgeous setting of the classic story of an “errant knight” that The Canadian Opera Company closes out a truly exemplary season. This was the season when I finally learned to love The COC, when I finally felt like I had a favourite opera composer (Donizetti) and a favourite soprano (Adrianne Pieczonka), when the directors and actors finally seemed on the same level as the musical technicians, when the storytelling was finally strong enough that I stopped reading the surtitles (at least some of the time), when the sets finally reflected more creativity than money, when (Finally!) there wasn’t a single production all year that had to do with an angry duke randomly threatening to kill the soprano’s lover. It was a great season marked by only one real dud (Hercules) with more than a few triumphs. In wonderfully theatrical fashion, one of the season’s greatest triumphs is also its closer.

Italian bass Ferruccio Furlanetto is wonderfully sincere in the title role of Don Quichotte, especially in the later acts once he’s overcome his emotionally stunted scenes alongside Anita Rachvelishvili’s callous Dulcinée. Far more compelling is his relationship with Quinn Kelsey’s sympathetic sidekick Sancho Panza, a beautifully sung interpretation even if played for fewer laughs than expected. Furlanetto, like Rachvelishvili, begins a little muddled- lost beneath his showy beard and exciting hairdo- but declares himself a talent beyond measure with his stunning and understated Act II prayer “Seigneur, reçois mon âme”, deepening the performance with every moment until his final notes in Act V, sung with heartbreakingly honest imperfection as the knight’s body fails him.

Donald Eastman’s cleverly thematic set and Christina Poddubiuk’s lush costumes are also highlights but, beyond Furlanetto’s greatest moments, the star of Don Quichotte is undoubtedly Massenet’s glorious score under the baton of dreamy COC music director/MVP conductor Johannes Debus. The COC Orchestra is (as I say constantly) wildly under-appreciated and they never sound as marvelous as when they’re led by Debus. The mesmerizing interlude that precedes Act V (shoutout to cellist Alastair Eng for almost bringing me to tears) is perhaps the shiniest example of the Debus/COC Orchestra mastery but no matter the notes, no matter the production, there is never a time at the Four Seasons Centre when it’s not a joy to see Debus’ baton rise and fall gracefully over the head of the patrons in the first row. It takes a production as good as Don Quichotte and a leading man as compelling as Furlanetto to pull your eyes from the orchestra pit. Luckily, that’s exactly what The COC has on its stage right now, and (for the most part) has all season.