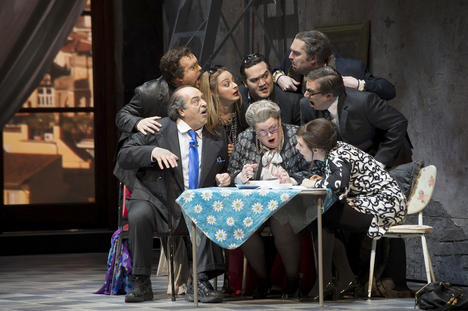 If you were to do a search of the most commonly used phrases on this website, one of the top hits would undoubtedly be “mixed bag”. I use the term constantly, mostly because I insist that a review include at least one criticism and one compliment for every production. But, really, most things lean to one side- they’re all mixed bags, but most are mostly good or mostly bad more than fully and evenly mixed. The current double bill being presented by The Canadian Opera Company, however, is literally a mixed bag of the good and the bad. I disliked the bad in direct proportion to how much I liked the good, but while those qualities exist side-by-side right now at The COC, there is an easy division between them- intermission.

The first act of the evening is Zemlinsky’s A Florentine Tragedy, a densely serious take on Oscar Wilde’s play about a cheating wife whose passion for her husband is reignited when he kills her lover in front of her. As absurd a premise as that is, it plumbs the depths of human sickness in what could be an utterly fascinating way. Why are we both desensitized and drawn to violence? Why is a violent temper a quality that attracts many women to dangerous men? Is our lust for attention so extreme that we parade lovers in front of a spouse, hoping for a reaction, no matter how extreme? How terrifyingly flexible is our personal line of justifiability? A Florentine Tragedy should be terrifying and evocative, thrilling, steeped in foreboding suspense. It is not. Mostly, it’s just boring. The voices of Gun-Brit Barkmin (Bianca, the troublesome wife), Michael Konig (Guido Bardi, her lover) and Alan Held (Simone- the jealous husband) are good (it is the COC, after all) but far from the most impressive of the night. They seem thin, expressionless, uninspired. Wilson Chin’s set design is the best thing about the one act- a 1920’s Florentine apartment with a massive and hauntingly stoic photo of the married couple who lives there, looming large over the scene (a particularly effective innovation). Thankfully, during this travesty of blah-ness, I was seated in the Four Seasons Centre’s third ring, the best seat in the house for pit orchestra gazing. There are few sounds more exciting in this world than that of a quality orchestra’s final tune before they begin an overture (the ritual currently plays over the opening title of NBC’s Smash and is, at the moment, the best thing about the show). Then, barreling into Zemlinsky’s fierce score, the opera orchestra was at their absolute best (as they always are, they really are a brilliant ensemble). So I spent most of that first act watching them, because pit gazing really is a wonderful diversion from an achingly dull production, complete with frantic and amusing bow synchronization, at least one particularly handsome cellist, and that beautiful effect when light from the music stands hits the wooden string instruments and makes them glow like embers.

After intermission, I hardly watched the orchestra at all because the action on stage was so wonderfully entertaining that I wasn’t even tempted. First of all, you can try arguing with Puccini’s genius with opera score, but no one will be listening, because his work in the medium is consistently remarkable. Gianni Schicchi, a one act comedy that I’d never heard before, easily lives up to the Pucinni legacy, and then some. Comedic opera is a sadly under-produced genre but there’s something incredibly cool about a massive English-speaking audience erupting into laughter because a performer’s facial expression or inflection clued them into a fantastic Italian joke. Such productions require a particularly apt cast who can convey the joke without crossing the ham line. The ensemble of The COC’s Gianni Schicchi is wonderfully up to the task. They are uniformly wonderful. The Donati family are particularly hilarious as they pretend to mourn their deceased relation and fight over his will. They are the perfect comic ensemble, taking themselves hilariously seriously and being the bad human beings we all love to laugh at- pretentious, selfish and largely useless. Obviously, they nail Puccini’s vocal score, but the chorus of Gianni Schicchi could be completely silent and steal the show on their physicality and wonderful facial performances alone. As Rinuccio, the black sheep Donati who hopes to inherit enough money to marry his lower-class love Lauretta without a dowry, Rene Barbera is lovely. As an actor he’s merely passable, a sort of operatic Bobby Moynihan in puppy love, but his soaring tenor is one of the best I’ve heard, truly captivating. The object of his affection, Lauretta, is played superbly by the great Simone Osborne. Osborne was a bit disappointing in Rigoletto earlier this season, but her stunning soprano really soars here. Her famous aria “O Mio Babbino Caro”- in which she appeals to her father (the titular Gianni) to help Rinuccio’s family get their inheritance by posing as the deceased and changing his will- is nothing short of glorious. The clarity and control in Osborn’s voice is insane and her tone is simply beautiful- one of the best vocal performances I’ve heard this year. The plot of Puccini’s one act (libretto by Giovacchino Foranzo) is based on part of Dante’s Inferno and the bad-guys-get-what’s-coming-to-‘em resolution is thus as appropriate as it is delightful. Director Catherine Malfitano smartly updates the action to present day where the themes are ever more relatable and the characters all the more recognizable. Her staging is also refreshingly fluid, counting on her performers to deliver even when she takes away the conventional stand-and-sing comfort of most stagings.

Gianni Schicchi might just be the best thing I’ve seen from the usually uber-serious COC. There’s a self-aware fun to the one act that is completely missing from its double-bill companion, The Florentine Tragedy (which is neither fun nor deep enough to be truly commanding and is certainly not self-aware). With both productions coming in at only 52 minutes each, the Double Feature is also one of the most economically timed offerings I’ve seen in awhile, yet its first half still feels centuries long. If you can make it to intermission, however, Gianni Schicchi just flies by.