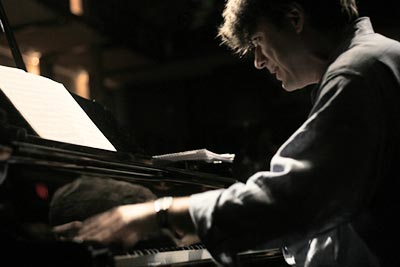 The Art of Time Ensemble: Russia in Exile

I grew up in a small city with not much going for it. There was hockey, figure skating and a damn impressive recreational baseball league, but for an uncoordinated, artsy kid like me, there wasn’t much in way of comfortable pastime. The lone exceptions to this rule were two studios where my weirdo smart-aleck younger self finally felt at home. The first was the dance studio of the wonderful and sadly departed Miss Deborah Seney. The other was a home-run Suzuki studio headed up by my grade one teacher and her fully adult 17-year old daughter, Kerri Wood. Mme. Wood taught a small group of piano students, but The Suzuki Kids were Kerri’s show. That warm, thoughtful and endlessly talented violin teacher was the first person to ever teach me how to do something better than the show-off sporty girls at school; they couldn’t figure out how I made my fingers fly so fast or how I kept my bow movements and fingerings straight throughout a 3 page concerto- but those were secrets between me and Kerri, they could go kick a ball around a field and ponder, I had Vivaldi to play. Every Friday we had “group” (a key component of the Suzuki method) where a pile of Kerri’s students would pile into the library and play. Us big kids who’d been together for years played harmony on the songs we still knew from when we first started. The little kids (3-4-5) played “Twinkle” up front- giant grins on their faces, their bows all over the fingerboard. Those “big kids” were my best friends and those Fridays were the reason I put up with the Monday through Thursday of in-class boredom and recess isolation I experienced each week. For years, I lived for “the group”, Kerri and my beautiful maple violin.

I have a point, I promise.

My point is that there’s a thrill to classical music (particularly strings), or least there should be if the musician deserves to be getting paid to play. There’s a thrill to hitting that hard chord or playing a piece so fast that you’re not quite sure your fingers haven’t left your brain completely behind. The knowing glances as the unlikely cello steals first violin’s melody line, the anticipatory “2, 3, 4” before the first official beat, the thrill of making a sound that amazing from  a piece of wood and some metal strings, the sense of honour in playing music that’s been tried and found genius over hundreds of years of history- classical musicians should be responding to the very thrill of the job they have the privilege of doing.  If they aren’t, they should get out of the way because there are generations of artists behind them who are. This is a depressing theme I’ve noticed in Toronto lately. The ageing TSO artists have gotten too settled in their comfy Roy Thompson seats, only a few of them seem to have much fire left. The opera and ballet orchestras (which share many members), on the other hand, are that much younger, that much more energized, that much more fun to watch (if you’re trapped in a boring act as I was last week, a third circle seat and its perfect view into the exuberant pit is a saving grace). But even with those supplemental orchestras picking up the TSO’s slack, it’s been awhile since I’ve seen the sort of joyful attack I expect from someone with a classical bow in hand.

Until I saw chamber music group The Art of Time Ensemble.

A small collective of elastic form (string quartet, quintet, plus bass, plus piano, plus clarinet, sans viola- it changes every song), Art of Time has the sort of enthusiastic artistry that infects the audience. I haven’t thought about Kerri and the Suzuki kids in years, but after the Art of Time concert I couldn’t help but rush home to jump into our old go-to, “The Bach Double”, wishing I still had Jordan, Jaqueline and Adam to play alongside me.

The Art of Time concert I had the privilege to attend was Russia in Exile down at the wonderful Harbourfront Enwave Theatre. I was skeptical at best. The Russians have produced none of my favourite pieces of anything and I’ve always adhered to the President Bartlett attitude towards modern music of the classical variety (“Modern music sucks. Anything written after 1860 sucks”- The West Wing). Those prejudices aside, as a violinist, my relationship with Stravinksy (the first composer to be featured in Art of Time’s Russia concert) was… let’s go with “strained”. Art of Time convinced me to put all those issues in a drawer and shut the hell up. Their performance was marvelous, superb, utterly bewildering in its evocation.

First violinist Benjamin Bowman was my favourite, one of only two musicians to perform in all 4 pieces (the other was Art of Time Artistic Director/pianist Andrew Burashko). Bowman is the living example of everything I talked about in all those long-winded and self-indulgent preceding paragraphs. The end of a movement brought about an exhausted sigh and a broad smile from the sweet-faced musician (a key player in the aforementioned excellent ballet/opera orchestras). The harder the piece, the more intense he became- perched precariously on the edge of his seat as if ready to leap up at any moment, sawing the horse hairs off his fast-flying bow. The other performers were all equally brilliant, though not quite as dynamic (most came close, though, which is quite the feat). I particularly enjoyed the sheer mastery of Thomas Wiebe on the cello and the hair-flying fun of quirky bassist Joseph Phillips.

The night’s best song, Mikhail Glinka’s “Grand Sextet in E-Flat Major”, was stunningly beautiful with a stripped-down performance of the complex but melodic piece. The third offering, while overwhelmingly impressive (these guys can PLAY, let there be no mistake that they could be sacrificing technique for artistry and performance value), was a prime example of why I’m skittish about modern-classical. Unlike Glinka’s piece which managed to be affecting and enjoyable, “Piano Quintet” by Alfred Schnittke was simply ugly. The other three pieces of the night (which ranged from decent to wonderful) all had profound melody and heartstring-plucking soar to go with their innovative “modern”-ness, but the Schnittke just made me want these glorious musicians to stop playing. My plus one for the evening enjoyed the insanity of that third piece (mostly because she struggled to stay awake during the prettier ones), and I’m sure if I’d brought someone with an affinity for the score of Love From Afar over Tosca, they would have agreed. But, for my part, I’d just as well never hear the name Schnittke again, let alone the strains of his awkwardly placed notes.

The first and last pieces, the more forgettable of the night, were accompanied by somewhat nonsensical films by Tess Girard. Like the Schnittke, they were arty to the point of incoherent silliness, but they were far from ugly and largely ignorable, adding to the pieces every once in awhile but not as often as intended.

Burashko took his Artistic Director role to the point of Emceeing, which worked to a mixed effect. It was nice to hear the stories behind the songs (particularly interesting was the origin of the Prokofiev piece that closed the show- a simple opus with catchy Jewish motifs that reflect its reason d’etre) and Burashko made a charming narrator. I do always appreciate a word from the AD as they often give the audience a sense of the ensemble’s founding principles and current direction, but Burashko was in desperate need of some editing. Prepared notes would have cut down on his candid charm but they could have also cut probably about 2 minutes each off the draggy transitions.

Nitpicks aside, I left The Art of Time Ensemble with a renewed love of classical music and, specifically, strings (I grew up with the violin but have always been and will always be obsessed with the cello). With the Glinka, the group managed to make me fall madly in love with a new composer. With their take on Stravinksy’s “L’Histoire du Soldat: Suite”, they made me forgive him for our past disagreements, and with their bombastically loving ensemble of artists, they gave me hope that there are still classical musicians out there who love to play as much as I once did (hopefully, more).