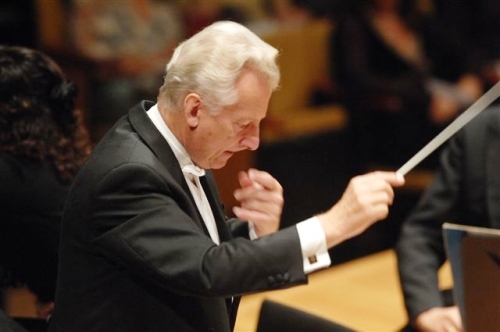 Beethovan & Shostakovich at The TSO

The Toronto Symphony Orchestra is a sensational ensemble as a whole. Though its population (and, notably, its audience) is ageing, the vibrancy of music director Peter Oundjian’s baton keeps them at a performance level on par with their technical achievements. In the early February concert series featuring Beethovan’s Emperor Concerto and Shostakovich’s Symphony No. 10, however, said conductor’s baton was passed back in time to Oundjian’s predecessor- Gunther Herbig, who, like the orchestra he led, was for more competent than he was captivating.

Through the headlining Beethovan concerto, featured pianist Anto Kuerti provided a pretty, tinkling melody atop a somewhat spiritless rendition of one of the master composer’s more forgettable works.

The night picked up, however, with the somewhat unexpected energy of the Shostakovich- Symphony No. 10 in E Minor, Op. 93. The composer did provide, as is expected with contemporaries from the 20th century, the occasional unpleasant a-melodic section, but the sheer fun of the hyper Allegro movement inspired the energetic buzz required to liven up the orchestra and easily made up for any modernist posturing.

Here is where individual performers began to stand out. Associate and Assistant Concertmasters Mark Skazinetsky and Etsuko Kimura shone, performance-wise, amongst the first violins (Concertmaster Jonthan Crow was, sadly, absent); Camille Watts produced a beautiful piccolo line and I would compliment the timpanist on his gusto but the program tells me David Kent is on sabbatical so the identity of said timpanist is a mystery. (In general, though I appreciate the group mentality, the lack of musician celebration at the TSO is somewhat sad- I’m not saying they each need a full-page feature, but an up-to-date list in the program that features the musicians with more prominence than the donors might be nice. As it is, it’s impossible to keep straight who’s who; there wasn’t even an insert to clue the audience in that Skazinetsky would be first chair for the evening in Crow’s place).

The February 2, 4 concert series was a mixed bag that featured some sure high points but was also a testament to just how much Peter Oundjian livens up the proceedings.