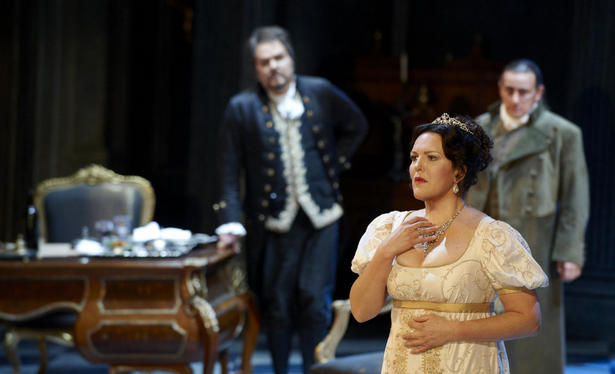 Tosca at the COC

Giacomo Puccini’s three-act ode to fidelity and sacrifice plays out with predictable beauty on the stage of Toronto’s Four Seasons Centre. The Canadian Opera Company, as usual, dresses the production with lush and expansive set and costume design by Kevin Knight, and while such stunning aesthetics are an expected treat of attending the COC, it’s the voices of Tosca that really make it soar.

In his director’s note, Paul Curran talks about the importance of character development and relationship within the story. Tosca, for all its melodrama and heartache, is a simple tale told without the fantastical flourishes of magic and fantasy that mark so much of opera. At its core, it tells the story of a love affair (between opera star Floria Tosca and painter Mario Cavaradossi) that is torn apart by a vicious chief of police (Baron Scarpia) and some political Macguffin involving an escaped prisoner (Cesare Angelotti). Cavaradossi is arrested for abetting Angelotti and Scarpia bargains with Tosca to save his life through a Measure for Measure-style indecent proposal. She agrees, then kills him, but not before he’s secretly ordered Cavardossi’s death anyway. That ending is far from a shocking twist- anyone who thinks they might run away and live happily ever after has clearly never seen an opera- but the sense of foreboding that goes along with predicting the ending makes the experience all the more vivid. In keeping with their director’s character-centric priorities, Curran’s spectacular cast creates engaging and empathetic characters whom the audience actually cares about- which makes watching them unknowingly embrace their own deaths so much more difficult (read: effective).

I’m not usually one for the title character, preferring standout sidekicks like Joseph Kaiser in Iphigenia in Tauris and delicious villains like David Lomeli in Rigoletto, but, refreshingly, the standout performance in Tosca comes from Tosca herself. Adrianne Pieczonka is stunning in the role- strong enough to sell Tosca’s jealousies without being annoying, soft enough to elicit genuine sympathy when she learns she’s accidentally betrayed Cavaradossi, smart enough to sell her final suicide as tortured defiance rather than romantic silliness. Her unparalleled vocal tone and astounding control through Puccini’s demanding work is nothing short of extraordinary. I also enjoyed Carlo Ventre’s Cavaradossi, though I would have preferred a little more heat from the pairing (I’d be interested to see how handsome alternate Brandon Jovanovich fares in the role) and was tickled by the villainous vigor of Mark Delavan’s Scarpia. The best among the supporting cast is Peter Strummer’s laugh-out-loud performance as the Sacristan, the comic relief that comes too early and disappears when we really need him to make us smile.

There is nothing new or all that different about the COC’s current production of Tosca, but that does nothing to hinder its beauty.

Tosca plays in rep with Love from Afar at The Four Seasons Centre until February 25th.