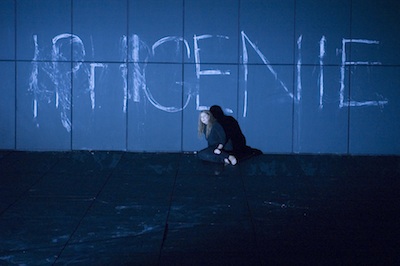 Iphigenia in Tauris at The COC

I am by no means an opera expert. A working knowledge of classical music, a solid background in French, a decent understanding of Greek myth and a critical eye for good storytelling was what I had to cling to as I entertained the prospect of reviewing the Canadian Opera Company’s current production. What I found, however, was that opera expertise didn’t prove a dire necessity as director Robert Carsen teamed with designers Tobias Hoheisel and Peter Van Praet and choreographer Philippe Giraudeau to create a production that is far more balanced between sound, movement and set than most opera I’ve seen.

Though the storytelling could be clearer (and, by god, it would help if a single word was enunciated), the tone of the piece is palpable. Tobias Hoheisel’s stark, minimalist set traps the characters in a slick-walled, black blood-covered, nightmarish box from which they can’t be released until the end of the opera when the walls lift and blinding light shines through. While trapped, the black-clad characters and chorus participate in a surrealist dance of identity- writing then erasing names from the walls of their prison, larger-than-life, chalk white letterings of the participants in the cycle of murders that kicks off the action: Agamemnon, Clytemnestra, Orestes, Iphigenia. The effect is chilling and thought-provoking. Chalk is also used to confine Orestes and Pylades to their literal prison- an impermanent white line on the ground standing between them and their freedom.

The other great effects in the production are all achieved through the sensational lighting designed by Carsen and Van Praet. I’ve never seen the medium used so effectively, it really is quite stunning. With a somewhat limited colour palette, the lighting team morphs the simple box set and creates some of the production’s truly memorable moments (such as the startling moment when sudden bright lights illuminate a chorus who seemed to have appeared out of nowhere, walked through the walls). The use of shadows is perfection, most notably as Iphigenia contemplates the sacrifice of Orestes, her downstage figure lit to tower over him in shadow as he kneels, trembling, upstage, the knife in her hand pointing right at his head though she is nowhere near him.

The chorus is oddly handled within this modern and dramatic vision. The singers remain backstage, removed from the messiness. In their place is a chorus of soundless dancers, thrashing about and giving literal representation to the characters’ inner turmoil. It’s strange and disconcerting, actually, to hear the chorus but see only closed-mouthed movement artists (their work seems to be less dancing and more “performance art”), making it far too easy to imagine the hardworking singers backstage as nothing more than a recording.

The onstage singers, on the other hand, are nothing short of wonderful.

Susan Graham’s brilliant dynamics and vocal control impress in the title role while poor Russell Braun was fighting a cold the night I saw his still-superb Orestes.

The endearing and golden-voiced Joseph Kaiser was my personal favourite as Orestes’ overly loyal friend Pylades. The chemistry between him and Braun was what really pulled me into the production. I was intellectually stimulated but emotionally removed from the melodrama of Act I but their beautiful duet that kicks off the second act had me close to tears and invested for the remainder of the piece.

The COC’s Iphigenia in Tauris is a beautiful modern realization of Gluck’s splendid opera that’s both thoughtful and emotionally potent- not to be missed.

Iphigenia in Tauris plays at The Four Seasons Centre in Toronto until October 15th.