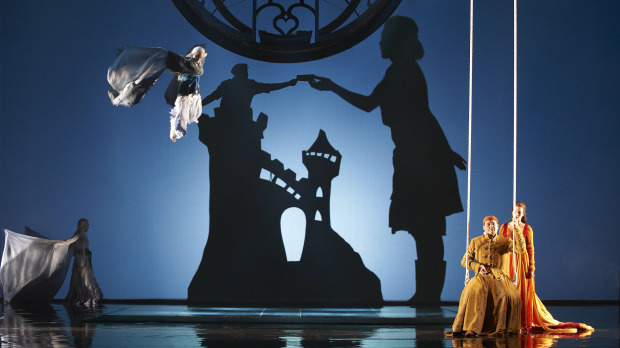 Love from Afar at the COC

The Canadian Opera Company is known for big productions- whether it’s the expansive drawing room of Rigoletto, the stark abyss of Iphigenia in Tauris or the cathedral from Tosca, currently splitting time on the Four Seasons Centre stage. Usually, the stunning sets and lush costumes are the cherry on top of full voices and enthralling stories. The production values are impressive, but they’re not capable of captivation on their own; nothing can cover up bad storytelling. Unfortunately, the production trappings in the company’s other current production are too ambitious- not only are they overreaching but the strings are showing more than usual- in the literal and the metaphorical sense.

Kaija Saariaho’s Love from Afar– a 12-year-old French opera from the Finnish composer- features a devastatingly complex and inaccessible score. For those in the audience with ears tuned to the intricate nuances of contemporary classical composition, the genius of Saariaho’s beautifully oddball music can carry you  swiftly through the somewhat short performance (clocking in around 2 and a half hours- 25 minutes of which is intermission). If your musical understanding is less developed or your tastes are more conservative, Saariaho’s score is inoffensively pretty (on the grand scale of dissonant modern composers) but simply doesn’t soar with the romance of her infamous predecessors. The voices in the current production don’t do much to hinder or elevate the music. Erin Wall is the best of them as the ingenue Clemence while Russell Braun sounded a bit thin singing the role of the love-struck troubadour-prince on Sunday. Krisztina Szabo started off shaky as the mysteriously unhelpful Pilgrim but found her ground quickly and held it well.

In keeping with the most depressing trend of all time, the fundamental storytelling of Love from Afar is the central problem with the production. Inspired by La Vida Breve by Jaufre Rudel, the opera makes Rudel its hero- the prince of Blaye who falls madly in love with a woman who lives far away and is described to him in vague terms by a sketchy Pilgrim whose purpose seems to be needless plot-driving. So, our silly man writes silly songs in honour of this woman who is “beautiful without the arrogance of beauty, rich without the arrogance of wealth, pious without the….” or something like that. So our trusty Pilgrim takes this information back to the lady in question, Clemence, and she, in turn, falls madly in love with him- probably because all that lack of arrogance leaves a hole that can only be filled by the undeserved and misguided devotion of a stranger. So, Jaufre sets out to find his “Love From Afar” (the phrase is repeated more times than “Amen” at Catholic mass) but during the trip gets stressed out that he might have been too hasty. And, as we all know, stress always leads to immediate death (but only when pirates aren’t available as a plot device, and it seems no one thought  to use pirates here- though they would have improved things immensely). So Jaufre is dying and Clemence is all sad but they declare their love for one another within 15 seconds of meeting so it’s all good even if he is dead. Now, the astute reader will probably have picked up on my irresponsible shift of tone between my first analytical and high-falutin paragraph and this one, but I make no apologies- the shift was necessary if I was to get maximum mocking satisfaction from this travesty of a plot. And I have, so I appreciate your understanding.

In an attempt at covering up the story’s failings or, perhaps, to lend it some artificial metaphorical heft, director Daniele Finzi Pasca has teamed with designers Jean Rabasse (set), Kevin Pollard (costumes) and Alexis Bowles (lights) to smother the production in spectacle. There’s impressive aerial ballet (there’s too much of it, but it is impressive), but, apart from that, there isn’t a single effect I couldn’t see through from my middle-orchestra seat. I can suspend my disbelief as silk is fluttered to simulate the ocean- the effect would be somewhat entrancing if used more sparingly- but I cannot abide a video projection of the actual ocean. The lighting is obsessively on-the-nose, the set pieces distractingly mobile and the costumes a dreadful mix of dowdy and cartoon-inspired (The Pilgrim, in particular, looks like she’s stepped out of a Final Fantasy game). The worst feature is undoubtedly the tripling of the characters with each of the three leads acquiring two obnoxious body doubles for artsy mirroring and contrast and general unsettling uncertainty (which might- emphasis on the “might”- have worked had the doubles been close matches to the singers, which they absolutely are not). Each schmantzy touch has the feel of something a bored English teacher would like to get their hands on- big and dissectible; you just know the creative team spent months carefully constructing each visual metaphor even though they in no way could ever fix a story that needs re-writting far more than embellishment.

Love from Afar has one thing to hold on to, Saariaho’s music- which itself has an unfortunately niche appeal. With a strong story and smarter production storytelling the aforementioned audience members not included on the contemporary classical joy ride might find themselves easing into Saariaho’s complex musical world and finding the heretofore foreign beauty in it. But as it is, if her style isn’t your own there are literally dozens of reasons to tune her out.