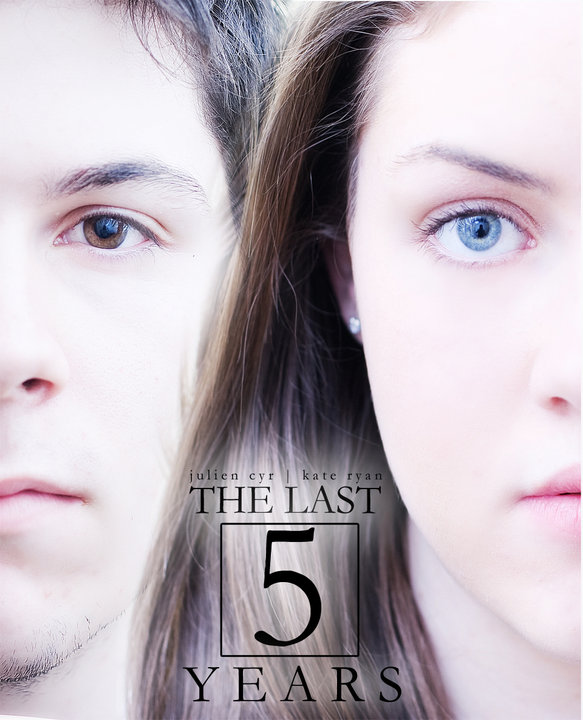 The Last Five Years is one of my favourite things ever written for the stage. In it, composer Jason Robert Brown shares a uniquely personal story of the 5 year relationship between him and his wife that ended in broken vows, a broken marriage and broken hearts. Standing in for their real life counterparts are the tangibly real characters of Jamie and Cathy: two of musical theatre’s greatest creations in one of musical theatre’s most poignant stories.

Cathy tells the story of the couple’s five year relationship in reverse, beginning with her heartbreak in “I’m Still Hurting” and culminating in dramatically ironic and torturous hope in “Goodbye Until Tomorrow”. Jamie tells the story chronologically from their first meeting, “Shiksa Goddess”, to the day he decides on divorce in “I Could Never Rescue You”. The audience sees every event in perspective-skewed detail twice: through the eyes of the suddenly successful writer desperate to enjoy his success, and those of the struggling actress who can’t seem to catch a break.We see Jamie sweetly support Cathy’s dreams and her resent his. We see Cathy put her heart in Jamie’s hands and him smash it to pieces. We learn that Jamie “has to be in love with someone” and Cathy just wants to be loved at all. We see him support her until he can’t anymore and her try to hold on to him until he won’t let her anymore. We see her drive him away and him trample all over the vows they made until there’s nothing left but hurt.

There has been great debate among contemporary musical theatre lovers over who is in the wrong in the story of The Last Five Years. One of the most knowledgeable thespians I know is determined that the play is meant to be Jason Robert Brown (aka Jamie)’s apology letter to his ex wife (aka Cathy), an outright admission of guilt and an explanation of his actions. Others believe that there are only so many “Schmuel Song”s one can sing and the play frames Jamie as the hero who tried all he could to rescue a damsel who was incapable of being rescued. But I think the genius of The Last Five Years is that neither is true; Jamie and Cathy are too complicated for black and white assignments of guilt. The Last Five Years shows us a relationship so real that I see people I know in every action or inaction Jamie and Cathy take. These characters are as complicated as the human beings they were inspired by. They both hurt and are hurt, love and are loved; there’s nothing simple about it.

And for every complicated character motivation in The Last Five Years there’s a brilliantly composed musical number every bit as complicated in itself. From hilarious and intellectual lyrics to the hardest vocals in modern musical theatre, the libretto of The Last Five Years matches every bit of the genius of its story and characters. Absolute instrumental mastery is required to pull off the challenging orchestration and a voice that can tackle the range of one of the two roles is a rare thing. Jamie and Cathy require actors who can make an audience laugh, cry and fall in love within the space of 90 minutes. They have to sell character selfishness and hopelessness, heroics and vanity while abandoning all vanity themselves to come down to the gritty human level of these supremely flawed characters. They have to let the audience hate them and demand that they love them.

A Last Five Years director is starring down the barrel of a gun the minute they decide to produce the play. They have to find actors up to the task then teach them how to do it with poignancy. A music director has to translate Brown’s impossible score with precision on all fronts without losing the emotional resonance. A director has to navigate the play’s troublesome structure without distracting from its low-frills core. The Last Five Years is simply an impossible undertaking.

So when Vetoed Productions, a new student-founded theatre company in Toronto, announced the undertaking I marked it down in my calendar as an event not to be missed. The emotional maturity and professional technique required for The Last Five Years made it a longshot for a student company success but if anyone could do it it would be Bishop Strachan School girls striking out on their own with the valuable support of their teacher Brandon Allen.

The production was a mixed bag of achievements that was ultimately a surprising success.

Despite some over-directed bits (air quotes, mimed jokes and emphatic hand gestures were a bit too prevalent), the direction was innovative and well thought out. First-time director Emily Kassienavigated the logistically difficult musical with great ease. The set, a large multi-layered round structure resembling a wedding cake, was functional and worked metaphorically with its clock-inspired markings contributing to the looming theme of inevitability in the play. It allowed for interesting movement and levels, played with shadows and encouraged fluid scene transitions. The lighting was simple but well executed and exactly appropriate to the piece (the one weak point being the heavy-handed use of a red gel for “Nobody Needs To Know”). The costumes and props enhanced the piece and characters without being distracting or cumbersome. Blocking generally kept the audience engaged, allowing the songs to tell their own story without over-complication. Some directed character moments were unconventional (and, arguably, detrimental) such as the quieter take on the usually boisterous ending of “I Can Do Better Than That”, the early establishment of Jamie’s seedy side with an overt sex joke in “Shiksa Goddess” and a sheepish rather than proud approach to “A Part of That”. But overall, it was a cleverly directed piece.

The pit band, for the most part, stumbled through Jason Robert Brown’s unimaginably difficult score with proficiency. However, the string section seemed lost at times, as if the talented players had underestimated the rehearsals necessary to master Brown’s songs. Music director Scott Orr kept his band on track, in time and well balanced while, not perfectly, but competently, tackling the piano part himself. At times the weaknesses in the string section (particularly violin) or a fumbled piano solo detracted from the piece, but the pit has to be commended for managing the insane score at all; there were certainly times when they added brilliant layers to the action (the cello part in “Still Hurting”, in particular, was beautiful).

But it was the hearts of the piece, Jamie and Cathy who ultimately determined my opinion of the production.

Julien Cyr, as Jamie, started off really weak. The part seemed out of his vocal and acting range, his performance laboured. As he struggled through Jamie’s demanding first 2 songs “Shiksa Goddess” and “Moving Too Fast”, he seemed outmatched; some phrases even had to be sung out of octave or speak-sung. However, once he reached Jamie’s third number, the all-important “Schmuel Song”, Cyr hit his stride. From there he held on and did a decent enough job through to the end, with a couple weak points throughout. Cyr struggled to balance Jamie’s sincere sweetness with his darker side, often times missing the mark on both. But when he was on he was on, charming the audience fully with an endearingly goofy and honest “Schmuel Song” and tugging at heartstrings in the mournful “If I Didn’t Believe in You” (in my opinion the two linchpin songs of Jamie’s character). The production’s low point, “Nobody Needs to Know”, was a disappointment not entirely Cyr’s fault with lights, direction, pit, vocals and acting all under-performing on Jamie’s important last plea for understanding. He sounded spectacular on the occasional note that sat right in his comfort zone (the “na na na na”s in “Schmuel Song” and “hold on”s in “Nobody Needs to Know” stuck out as strong) but ultimately proved no match for the role (which, let me emphasize again, is one of the toughest ever written, hardly ever played completely effectively). In general, though he managed alright, Cyr seemed less comfortable in his role than his costar.

On the other end of the spectrum, one of Toronto’s best young performers, Kate Ryan, outdid all the high expectations I had for her. Greatly matured since her early days in Toronto Youth Theatre (Lucky Stiff, Robin Hood), Ryan’s brilliant voice has only gotten stronger and her acting has improved immensely. She was brilliant throughout the entire piece, belting out notes her small frame would never have suggested she could hit. Her acting and character sense shone right alongside her one-of-a-kind voice as she tackled Cathy’s funny numbers (“Summer in Ohio”, “I Can Do Better Than That”), tragic songs (“I’m Still Hurting”, “See I’m Smiling”) and every complex note in between. Heartbreaking acting in the small moments (especially the show-starting “I’m Still Hurting”) easily made up for the occasional over-the-top performance (a pitfall of her earlier work). Ryan nailed the all-important “See I’m Smiling” crescendo and landed every note with precision, technique, character and strength, even when her blocking had her sitting and eating chips during one of the toughest songs in the show (“I Can Do Better Than That”). Unafraid of surrendering vain perfection to character poignancy, Ryan’s performance was an achievement character-wise as well as musically, a rarity among vocalists of her caliber.

Ultimately, the challenge of mounting The Last Five Years at all should earn Vetoed Productions (just now completing their first season in existence) some serious theatre cred. The fact that it was as well-executed as it was only serves to warn the Toronto theatre community of what’s coming: a tribe of some VERY determined students who show no signs of ever backing down from a challenge.

The Last Five Years‘ final performances are Saturday May 29th at 2pm and 8pm at The Berkeley Street Upstairs Theatre.