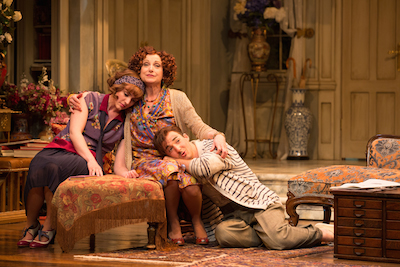 Hay Fever is sort of like watching a Shaw Festival production starring Lucy Peacock (a Stratford staple if ever there was one). But not one of the marvelous Shaw Festival productions that showcases the festival’s eye for young talent, a dull production designed entirely to show off the set budget and give ageing character actors leading roles. The Stratford Festival does best with plot, not witty, weird people sitting in rooms and discussing, ultimately, nothing. Consider last year’s excellent Noel Coward production from Stratford- Blithe Spirit, a parlour comedy with romance and intrigue and magic and death, just for starters; it rollicked along on the backs of Michelle Giroux, Ben Carlson and Sara Topham as they navigated many a high-concept hijink while holding onto the emotional reality. Coward himself admits that there is very little plot in Hay Fever. In fact, it’s almost unbelievably low-concept: 8 people, 1 house, that’s it. But this is a company used to having something to do. In the absence of something to do, they do too much with Coward’s witty, weird people sitting in rooms, making them into people not worth watching as they do nothing.

A few fun moments are carved from the space between lines (a series of people coming in and serving themselves breakfast is good for a few mild chuckles) but it’s almost shocking how ill-equipped the cast seems for Coward’s banter, especially the banter that reveals who people are rather than what they are doing. The best thing in the production (aside from seeing that someone has finally started giving Gareth Potter lines again) is the discovery of the charming Ruby Joy who has managed in the past to stand out in small roles but here actually gets something to say (and goofy glasses, because the audience was not trusted to think the pretty actress is interesting without them). Sanjay Talwar is also excellent as the awkward diplomat Greatham (a great name if ever I heard one) and I got a kick out of Sarah Orenstein’s disaffected maid, though everyone else far from lives up to their supposed star power.