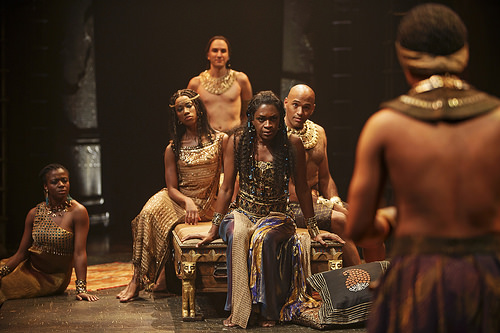 A few of the many many many reasons I didn’t like this production:

– Geraint Wyn Davies is one of the least vulnerable actors I’ve ever seen. He reminds me so much of Henry Breedlove (his Slings & Arrows character) when all I want is for Macbeth to be played by Oliver Dennis (not literally; if you don’t understand, Click Here). Technical proficiency doesn’t matter when you can’t make me care about your characters. This is the first time I’ve seen him play a real leading man on whom the success of a production rests and the extent to which it doesn’t work is hard to express fully in written word.

– Wyn Davies and Yanna McIntosh have about the same amount of chemistry here that they had in 2009 as Bottom and Titania. That is Not Good.

– This production is cast like a high school production of West Side Story. All the white people are Jets (or Romans, as the case may be) and absolutely everyone else is a Shark (or an Egyptian), no matter how definitely-not-Puerto Rican they are. Surely our “colour-blind casting” could be a little blinder than that.

– The over-sexualization and simplification of Egypt (that’s quite the outfit they’ve got on Sophia Walker, lucky she has the grace, and legs, to pull it off). Way to reduce a complex geo-political landscape (and its powerful leader) to a gimmick (look, a hookah!).

– If you absolutely must contrast the two locations as though they were Bohemia and Sicilia, and you absolutely must make Rome stark and brutal against an opulent and steamy Egypt, would you please make sure that said playground of sexual desire is a little bit sexy? There was no heat here whatsoever. I guess the cast of Chamber Dream stole all the sexy this season and refused to share.

– Hair! From the terrible roman bowlcut atop Daniel Briere’s handsome head to the wispy wig forced upon the wonderful EB Smith in Act 5, this show is a follicle mess. The worst was the greasy, braided situation on Tom McCamus’ Enobarbus, though I kind of loved the absurd braids sported by Stephen Russell.

– Antony & Cleopatra. It’s simply one of Shakespeare’s least effective texts. It’s thematically personal but technically political, a juxtaposition that usually results in productions that are confusing plot-wise and not particularly rich character or theme-wise. Sure enough, the chatter at intermission and post-show revealed that no one in my row was really following the action, and I know that I, at least, didn’t care a hoot about the characters (I refuse to accept a Romeo & Juliet ending from anyone over the age of 17, and these characters are definitively middle-aged. I therefore declare them idiots and I don’t enjoy watching idiots). Not a play suitable to phoned-in direction; let’s keep Gary Griffin on musical duty from now on.

– Not enough Carmen Grant. Octavia is intriguing and Grant is woefully underrated, therefore her very sparse stage time is essentially just a tease. There’s one strange moment of “okay, we’re making a big choice here!” between her and Ben Carlson’s dull Octavius but nothing leads into it or comes out of it; it’s just there.

– Antony’s death looks exactly like that of Pyramis in Midsummer’s dumb fifth act. Read into that what you will.

– Is that really what an asp looks like? My god they’re small. I was really hoping for a big ole scary thing to add some intensity to the whole affair. No, really, what this production needed was a giant snake, a real one (albeit not a poisonous one) to coil around Yanna McIntosh (supervised in the wings by its diligent trainer) and wake the audience up… or Griffin could have just cast leads who had even a tiny bit of chemistry and not put the audience to sleep in the first place.

*I used this title mostly because I enjoyed the play on words but also because new Artistic Director Antoni Cimolino should have been able to forsee every one of the problems I just listed when he decided to hand Antony & Cleopatra, of all plays, to Gary Griffin, of all directors, armed with the leading players in question. He’s playing everything too safe and leaning on Monette-proven personnel when he should be carving out a new festival identity for The Cimolino Era. This wasn’t a freak accident of a production, it was a bad design Cimolino should have caught before it left the planning stages.