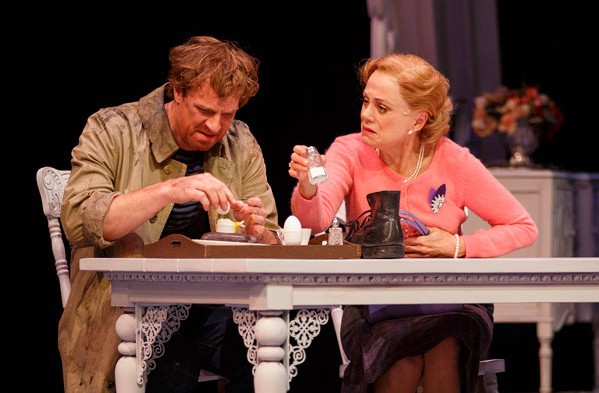 The Arsonists Enraptures more than Captures at CanStage

15 AUGUST 2012- I am about to watch a show directed by my favourite Canadian playwright (Morris Panych).  The set is fascinating to me.  I love absurdist drama, and the designer (Ken MacDonald) has made appropriately bold choices with this fantastical set that feels like an even larger than life version of a cute doll house.  The use of the entire space is brilliant.  I am told the play is set in no particular time or place, yet there is something strangely familiar in the mixture of styles which mark everything from a prominent wingback armchair, to flowery wall-paper and towering blonde wood that lines the balustrades, walls, and eavestrough in a somewhat off-kilter manner.  The attic, in particular, is neatly positioned on stage right as opposed to being placed at a higher level which may have been too conventional here.  Actors must move up and then down a long staircase shaped like an upside down V in order to access it.  I’m sitting in front row centre of the balcony.  All musical connoisseurs know the sound is much better up there!  What could be better than this?

The play begins and an “unusually normal” – not grotesque that is – chorus satirically named the Fire Brigade plays a score with anticipation, representing the actual firefighters of the town, waiting to learn of the next place to be hit by the notorious arsonists who are burning things down one building at a time.  I am most intrigued at what insight they have to offer on the story which is about to unfold.  But then the dialogue begins between Biedermann (Michael Ball) and his maid Anna (Sheila McCarthy).  At first, I am following what they are saying, but soon enough I am in and out of it, having to work a little too hard to hear it all.  I begin to realize most clearly, for the first time, the impact of what performance and media theorist Philip Auslander deems society’s obsession with “closeness” and “intimacy” of sound in the age of television and digital sound technology.  Much of the production continues like this for me which is a shame, because, from what I can see, I am almost certain that it is being performed with utmost physical and expressive quality.  As a result, I, admittedly, miss out on the connection between Biedermann and the loiterer in the hallway whom I saw as some sort of mad scientist, Knechtling (Shawn Wright).  Turns out Knechtling is actually Biedermann’s business partner whom he greedily refuses to compensate for a co-invention.  It is appropriate that the first arsonist, Schmitz (Dan Chameroy), disguised as a starving ex-wrestler, arrives immediately afterwards to encounter a somewhat agitated Biedermann.  And he has no plans to leave after having a bite to eat.  While on one side, we may recognize the greed of Biedermann in many a businessman of our own time and his passivity as synonymous of the naivety of many a soul in a disenfranchised economy, on the other hand, the play reveals many conventions which take our minds towards the past: from the funeral wreath of a now defunct Knechtling ominously delivered by accident to the home of Biedermann to Mr. Knechtling’s widow who lingers inelegantly in the large home, waiting to speak to someone.  And, in addition, there’s the “theatre in theatre” proclamation of an oblivious Mrs. Biedermann (Fiona Reid) who moves between shock, fear, and bourgeoisie banter directed towards a second arsonist – now living in her attic with the first – and his eventual post-dinner portrayal of a ghost: “Didn’t we see this at Stratford?” she says.  The audience roar proves that localizing references in scripts is still an effective comic tool.  Given the significance of the play to our current social context, I found the effort touching, though I was not, personally, rolling in my seat.

Biedermann can be roughly translated from German into English to mean something along the lines of “everyday guy” and his passive response to the activities of two strangers who take shelter and store petrol in his attic is a magnificent criticism made by playwright Max Frisch on the cowardly support of Western Europeans who failed to perceive the evil in the rise of the Nazi party.  But the Mr. and Mrs. can only entertain me so long with their predictable tones and gestures.  It is the supporting cast that causes me to think and laugh the most.  McCarthy amazes me with the originality and distinctiveness of each transformation she make for roles on both stage and television.  Here, she moves fluidly between Anna and a singer in the Fire Brigade chorus which draws out her stunningly husky character voice.  And it is the catchy music composed by Juno-nominated Justin Rutledge which grounds the satirical commotion.  Rutledge is an equally convincing actor completely transforming himself as Fire Chief, Officer, and Doctor of Philosophy with both style and poise.

You see sometimes even the sharpest of businessmen can muster up a little compassion.  Here ours offers the finest wines, food, and cigars.  But that doesn’t mean that the forces of bad will not prevail, for those who simply enjoy doing things like starting fires do not necessarily need reasons for their their actions.  Sometimes there is nothing all the “humanity” in the world can do to stop the “odour of evil” from diffusing.  And the only thing that may seem right is to submit to it, or at least close our eyes.  Frisch had been drafted to the army in WWII but never had to fight, as his Switzerland remained neutral throughout, and the playwright always found this problematic.  When dealing with such heavy political and social contexts, I often find myself wondering if satire is the best approach, but, perhaps, satire is meant to enrapture me with ideas and images more than enchant me with stories and characters.  All said, this was an enjoyable show to watch despite the fact that I felt a little far from the action.

The Arsonists plays until Dec. 9 at the Bluma Appel Theatre in the St. Lawrence Centre for the Arts.