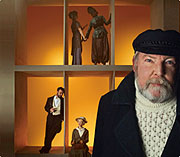 At the Shaw: Heartbreak House

Ranking: #6
There are a few recurring themes at Shaw this year; the first is conventional staging, the second is excellent design, the third is strong supporting players, the fourth is obnoxiously long productions and the fifth is, well, Shaw I guess. What I mean by that is strong scripts with fantastically clever dialogue and well-drawn characters with obnoxious and preachy social themes. Those are the inescapable features of a Shaw play. And by “inescapable” I mean “the festival’s reverence for the playwright blinds them to the necessity of underplaying such things for a modern audience”. Heartbreak House is a perfect embodiment of everything the Shaw Festival is doing both right and wrong this season (hence it’s sturdy position in the dead centre of our rankings: 6/11).

First there is the unforgivable length of three hours. It seems there’s nothing to be done about the general fear of editing that seems to have cropped up at the Shaw so I suppose there’s no use complaining about it.

Leslie Frankish’s design is either a beautiful, eye-enthrallingly detailed work that allows for dynamic staging, ease of movement and excellent depth of space. Or it’s a metaphorical suggestion of a boat, a cradle and the belly of some unnamed beast. I suppose it could be both, but the second just seems like a lot more effort than any of those not-particularly-interesting analogies is worth.

Heartbreak House is delightfully funny, moving, interesting, generally entertaining. It’s well acted by an extraordinary ensemble of actors that doesn’t feature a single weak link (Robin Evan Willis and Laura Paton are my favourites, though Michael Ball and Deborah Hay also stand out with wonderfully quirky offerings). But it’s not allowed to be as enjoyable as it should be.

As the piece wears on, it gets more and more pompous about its “greater themes”. That set ceases to be a feast for the eyes and starts to be a burden on the brain, the play rife with the suggestion that if you’re laughing jovially you’re not working hard enough. I get it Shaw, you’ve got something to say about the upper class and societal convention. Can’t that be something I can choose to infer or not? Must I be condescended to constantly, preached at for my horrifyingly bourgeois ways?

Had the production hit the preachy “it’s all a metaphor for your failings” notes a little lighter, I might have truly enjoyed Heartbreak House for all its excellent comic and character arc value. I even liked the period staging in this one, and I never like period staging. Here is where all the Shaw’s little tendencies come together to their best effect of the season, but weighed down so heavily by the weight of Shaw himself, Heartbreak House becomes merely middling.

Heartbreak House plays at the Festival Theatre in Niagara-on-the-Lake until Octorber 7th.