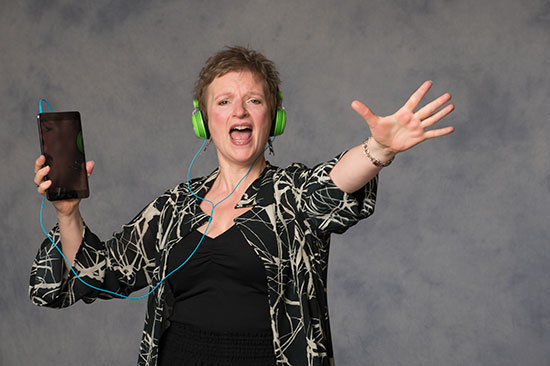 We love Kate Hennig. In Stratford, at the Shaw, with Mirvish, at Next Stage, in musicals, in dramas, in comedies, in musical dramedies, in pretty much everything- Kate Hennig is a marvel. As the fiercely kind and tragically lonely Bodey in The Shaw Festival’s lunchtime production of Tennessee Williams’ beautifully complex one-act about friendship and hope A Lovely Sunday for Creve Coeur, Kate delivered our favourite performance of her stunning career thus far.

Can you remember your first experience with theatre?
My very first experience with theatre was when I was about 4 years old, I performed a solo in a church Christmas pageant. I performed a song and set up the crèche scene for what I considered to be the young children [laughs]. That was the first thing that springs to mind in terms of I knew what I was doing already then [laughs].

What actors and actresses have always inspired you, and are they the same today?
I think it’s interesting. We had access to such an amazing legacy of theatre people in our generation. People like Nicholas Pennell and Kate Reid and Douglas Campbell and the list goes on, Brian Bedford. Working with those people, I suppose that the thing that really sticks with me is the inspiration of legacy and the idea of legacy in Canadian theatre. That’s always inspired me and continues to.

As a musical performer, what are some of your favorite pieces in that genre?
That’s a funny one, because as much as I love doing musical theatre, I don’t really pay much attention to it [laughs]. I always say, anything that happened after A Chorus Line is sort of [not on my radar]. [laughs]. And kind of even before Chorus Line, I didn’t know that much.

Recently, somebody posted on Facebook a recording of Jennifer Holliday doing “And I’m Telling You” on the Tony Awards broadcast, and to watch the machine that is her body singing, that’s incredibly inspiring. And then of course also it took me back to the early 80s when that show came out and how that was a huge show for all of us who were around at that time.

What was your first professional acting gig?
That’s just mean, isn’t it? [laughs]. My first professional acting gig was in 1981. I was in the young company at Huron Country Playhouse and I did four shows that season. I played Kalfang the Destroyer in the Incredible Magical Delfodil. I did two reviews- one was called Ten and one was called Stardust, which is a Hoagy Carmichael review. And then I was one of the Pick-a-Little Talk-a-Little ladies in Music Man. That was my first gig.

Tell us about your My Theatre Award nominated role in A Lovely Sunday for Creve Coeur.
It’s a really generous blessing, I feel. Because it seems like, you know, the lunchtime at the Shaw Festival is one of the more remote possibilities for such a commendation, so I’m very grateful for that. And it was such a beautiful part to play. I just loved our doughy little Bodey and, of course, playing with Deb Hay as your major scene partner is such a blessing. Deb and I have known each other for a long time, but never worked on stage together, so that was a real blessing. And working on a Tennessee Williams play that’s not known, so the gift of introducing people to a play by Tennessee Williams, I just felt very honoured to be able to do that.

She is such a lovely character, but she has that undercurrent of sadness to her. How did you strike that balance between inspiring pathos and admiration from the audience?
I think that’s who she is. And I think that’s how Tennessee Williams draws these characters. He likes to open up their depths and their despair. I think that’s something he’s very, very interested in. And also to show their sense of humour, and their sense of power. I think Bodey is a very powerful person in spite of what other people may perceive to be a life of sadness. She finds her own solace and her own power within that. I never felt that Bodey felt sorry for herself. Not for one minute.

Do you have a favorite moment from that production?
I have to say standing in the little spotlight in the kitchen and talking about the dream that I had for my roommate. I thought that revealed so much about her, but it’s actually speaking about somebody else. That’s that generosity of spirit again that’s really sort of palpable in that play.

You also appeared in one of our favorite plays of the season last year, When We Are Married with an all-star ensemble of Shaw veterans. Tell us about working with that incredible cast.
What’s there to say, really? [laughs]. You just get on the boat, and the boast sails, you know? That’s how that works. And with someone like Joe Ziegler at the helm, the whole experience of rehearsal was just a joy. And I have to say, in the rehearsal hall, I laughed my head off. I would just sit and watch the run throughs and just laugh and laugh and laugh and laugh and laugh. So it was a really, really enjoyable experience.

Do you have a favorite role you’re ever played?
That’s a hard one to say. I think I love all the little creatures that I have created over the years. Playing Mrs. Wilkinson in Billy Elliott was both the most challenging and the most rewarding experience I would have had to date, I would say. It was a huge commitment, it was extremely hard on my body and my brain, and also to share a stage with 25 children is really a great thing.

Do you have any dream roles?
I’d like to play Mamma Rose before it’s too late. I’d love to play Lady Bracknell. You know, that kind of thing. The sort of classics. But what’s wonderful is whatever comes along is usually a gift in one way or another. And I love opening the package. It’s kind of nice to take off the wrapping paper and see what’s inside.

Who are some of your favourite people to work with?
That’s a hard question, just because I’ve done a hundred shows [laughs] so I think about the last year instead of the last 35 years, you know? There’ve been so many along the way. I would love to work with Joe again. I loved working with Tim Carroll at Stratford a couple of years ago doing Romeo and Juliet. That was lots of fun. I love working with students as a teacher. That’s one of my favorite relationships, developing relationships with young people. I certainly enjoyed working with Deb in the summer. Patrick Galligan and I have been in 5 shows together and never been on stage together. So to play his wife in When We Were Married last summer was really exciting.

Let’s say that. That’s two; it’s nice to say two rather than name the whole season [laughs]. Those are the first two that spring to mind so let’s stick with them.

You’re also a playwright. Your new work The Last Wife is premiering at Stratford this summer. What can you tell us about that production?
I’m so excited about it, I could almost pee. Joe Ziegler, who is one of my favourite actors in the country, is playing Henry VIII. Maev Beaty is playing Catherine Parr. I mean, I have a cast that is going to read my words that [makes me want to say], ‘I’m not worthy, I’m not worthy, I’m not worthy’. And Alan Dilworth is directing, which is fantastic, and the design! The whole creative team is just- it’s unbelievable [laughs]. It’s one of those pinch me moments.

What else are you up to, and what’s next?
I’m in the rehearsal hall right now for Little Death by Daniel Karasik which is going to be at the Theatre Centre starting on April 17. I have just finished a residency at Banff as a playwright, writing my next play. And there’s something I’m doing in the fall, but I can’t talk about it yet.

Is there anything else you’d like to add?
I think that’s all, other than thank you so much! I feel very honoured, as I say, that you acknowledged this lovely little gem of a role. It feels like it’s one that could sort of disappear into the wallpaper. So I feel very grateful for that.