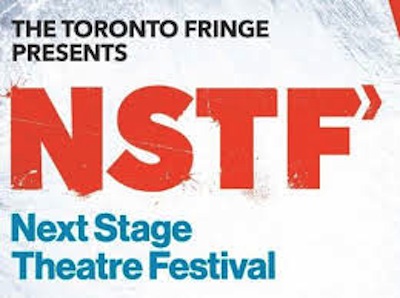 Toronto’s annual Next Stage Theatre Festival is a fantastic event where Fringe performers are able to take their work to, well, the next stage of its development. It has the same independent, organic feel that makes the Fringe Festival so special (also the beer tent element that makes it feel like a community affair) but it’s curated as opposed to run by lottery. The result is usually a slate of shows that serve almost as a Best of Fringe where you can see great, new, inventive Canadian Theatre without the risk of catching something that would never have made it past a jury. This year I managed, for the first time ever, to see All Ten of the NSTF shows and I wasn’t disappointed. Even those I didn’t like I didn’t like because of personal preference more than because they’re bad.

Here are my incredibly subjective rankings:

1) Stencilboy & Other Portraits
This was my favourite thing I saw at the 2013 Next Stage Theatre Festival. It lacked a lot of the flash of the others- it wasn’t Brecht or Chekhov or a musical or theatre of the absurd; it’s not a first-person narrative about the holocaust or a true story of any kind (at least I don’t think it is). It’s just a really beautiful portrait of the place where three interesting lives intersect. Susan Fournier’s understated text about art and the people who make it is funny, sad and poignant without being condescending or socially demanding. Her characters (all played beautifully with great nuance by Sochi Fried, Richard Clarkin and Brandon Coffey) are intricately drawn and honestly motivated. For an hour-long piece, Fournier’s world is remarkably full and her story remarkably rich. A great achievement.

2) Fatherly
The simplicity of this half-hour show is really compelling. It’s just one man (Sam S. Mullins) telling his audience a series of stories about his dad (under the guise of deliberating which one he should tell at his father’s still-far-off funeral). The details of Bill Mullins’ life (presumably all true) range from commonplace (he drinks a lot of Coors Light) to almost fantastical (the role he played in the life and career of baseball superstar Josh Hamilton). He’s a great subject and, luckily for him, his son is a great storyteller. All Fatherly is- all Fatherly needed to be in order to earn a top spot on my festival rankings- is Sam Mullins telling good stories really well. Even the “Bonus Story” he threw into the program because he didn’t have enough biographical information to fill 4 pages is one of the best stories I heard all festival.

3) Rifles
This Brecht adaptation begins in torturous silence. The suggestive set and evocative on-stage foley artist Beau Andrew Dixon effectively reinforce the Brechtian distance element while the heartwrenching story of a mother desperate to keep her sons out of the Spanish militia envelopes the rapt audience from the moment that torturous silence begins. Here’s a company so confident in the caliber of its ensemble that they’ve cast Wade Bogert-O’Brien as a corpse. They have reason for their confidence. The cast is, for the most part, superb, highlighted by the ferocious and subtle Kate Hennig and featuring Cyrus Lane in a stirring portrait of exhausted rage. As adapted by Nicholas Billon, Rifles is sad and desperate and quiet in the most powerful of ways.

4) A Misfortune
This Chekhovian new musical has two major facets. The first is a dreary love triangle between Trish Lindstrom, Rejean Cournoyer and Jordan Till, full of longing, discontented acceptance, and unmemorable songs that lack a distinct melody or particularly compelling lyrics (lyricist Wade Bogert-O’Brien leans on repeated words a bit too much to make his rhymes work. I feel like one “sublime” per on-stage hour is plenty). But said dreary trio is accompanied by a comic subplot that completely steals the show. And elevates it. Happy-hateful couple Masha and Pavel enjoy all of Bogert-O’Brien’s cleverest rhymes and composer Scott Christian’s best melodies. They are lively and likeable and even dramatically compelling as they navigate their complicated mid-marriage restlessness. And they are played by Adam Brazier and Kaylee Harwood, two of Canadian musical theatre’s most consistently charming performers (here, stretching their comedic muscles to great effect). The title of this piece surely applies to the fact that Masha and Pavel are merely a subplot.

5) On the Other Side of the World
This is a well-executed piece of theatre. The text is constructed well, the performances are strong, the direction is fluid. It’s fairly interesting and doesn’t drag and is, generally, an acceptable emotional and intellectual experience. What it isn’t, however, is special. The story of the tens of thousands of Jewish refugees who fled to Shanghai during the Second World War brings a new perspective to an oft-told story, and it certainly has its emotional moments (whenever Ursula, our narrator, refers to the stinky, cramped, dirty, harsh city as their saviour it is incredibly moving) but it’s hard to watch the hardships of these characters without thinking of how profoundly dwarfed they are by the millions of other stories from that time. It’s a sad, cynical truth but the ninety minute action of On the Other Side of the World is merely moderately moving when put into its larger context.

6) Release the Stars: The Ballad of Randy and Evi Quaid
Release the Stars is a multi-tiered narrative, essentially creating three distinct but interconnected stories. On the surface you have writer-performers Daniel Krolik and Amanda Barker as themselves, interrupting the action of their 2012 Fringe play to tell the story of when Randy & Evi Quaid actually showed up to watch the play about them. There’s a compelling story there about expectation vs. reality and Krolik and Barker are both compelling figures who have a genuine connection and tell a good story. Next is the most abstract level, in which Krolik and Barker play a pair of siblings named Peter and Wendy who over-relate to the story of Peter Pan and lean on the story of Randy & Evi Quaid as Peter slowly dies from cancer. Here is the meat of the play, the compelling emotion of it (especially considering this part is inspired by the true story of friends of the creators) but it mostly serves as a narrative frame and ends up being more confusing than affecting. The central story is that of Randy & Evi Quaid, a couple of Hollywood “refugees” who flee to Canada thinking someone is trying to kill them. It’s interesting, in theory, but in practice it’s hard to relate to characters so defensive and obtuse. Randy & Evi’s story is somewhat sad and somewhat interesting but the stories that frame it are far more of both of those things.

7) Killer Business- the musical
If Fatherly is the lowest maintenance production possible at the Next Stage Festival, Killer Business has got to be one of the highest. It’s a new musical with a big cast and lots of trappings. It’s amusing but usually not outright funny, clever but not even remotely original (Curtains, anyone?) and made of far more razzle dazzle than substance. That said, the songs (by Rob Torr) are really catchy and some of the lyrics (Torr, Saul Segal and Ken MacDougall) are actually really good (I particularly liked “I Swing”). The book writing is pretty sloppy and some of the characters make you happy it’s a murder mystery and one of them is about to be offed, but the cast has enough highlights (my favourites were Duff MacDonald and triple threat Christy Adamson) to make it worthwhile. I also really enjoyed the know-it-all chorus girls (Natalie Moore and Caitlin Goguen), full of fascinating and unwelcome tidbits like the origin of tap dancing.

8) Jack Your Body
This show is really not for me. It looks like it’d be fun to perform, and parts are really very impressive (that house trio raised the energy in the room by a factor of 10) but it’s a little too loud and free-form/story-less for my taste. Luckily, though it’s not for me, it’s definitely for Amy who reviewed the show during its 2013 Fringe Festival run. Read her review HERE.

9) Scheherazade
This is a seriously dynamite cast. With five(!) past or present My Theatre Award nominees in the mix, there were only three performers of the eleven-person cast whose work I wasn’t already a fan of before even buying my ticket (not because I don’t like them, just because I’d never seen them). Unfortunately, this is just a really dumb show. A few cast members (chief among them, ace improviser Kat Letwin and master of the sleazy charmer Steven McCarthy) manage to elevate the material a bit but, the occasional standout moment aside, Scheherazade takes a stirring story and makes it an over-sexualized farce that ends up being neither funny nor sexy despite aiming for both of those over poignancy.

10) Polar Opposites
I understand what playwright/performer Nicole Ratjen is trying to do here. A sneaky message-laden tragedy enveloped in a seemingly silly package where the audience gets to have fun throwing things at the stage (then feel bad about it if they think too hard) and laugh at the absurdity of girls dressed as polar bears. But I just wasn’t feeling it. Neither the comedy in the text or performances nor the thrill of tossing ping pong balls at the stage seemed like enough to overcome the chastising darkness of the story. The masks (by Ratjen and Eric Double) look great and there’s some genuine sympathy in Stephanie Jung’s performance as a polar bear living with too little space and food, but I just couldn’t convince myself to feel bad when I was told to or have fun when I was supposed to, making for a frustrating half hour in the antechamber.