At the Shaw ’13: The Light in the Piazza, starring Jeff Irving 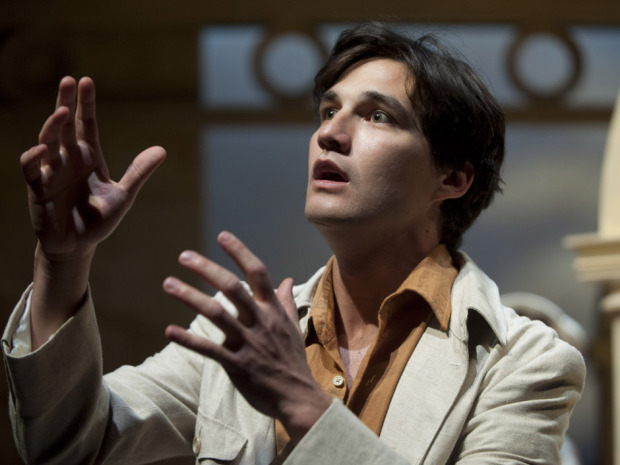 I was really looking forward to The Light in the Piazza. I love small, contemporary musical theatre and I’d never seen Adam Guettel’s work though I’d heard wonderful things about it. But it didn’t quite capture me. The classical bent of the music, language-barred lyrics and awkwardly rushed love story just aren’t my cup of tea. The Shaw Festival’s production is good, though, and, upset as I may be that I didn’t find a new favourite musical, I’m very glad to have seen it.

When the 2013 season was announced, Stratford star and Tony nominee Josh Young was slated to play Fabrizio, the young Italian man who falls for North Carolina’s simple beauty Clara as she tours Florence with her mother Margaret. When the big shot pulled out, the production seemed to lose a lot of its appeal. Young is hunky and enigmatic with a crazy beautiful voice- who better to play an Italian lover? His replacement, Jeff Irving, has been toiling away in medium-sized roles in Toronto and at the Shaw for quite a few years. I’ve always been fond of him as a performer (especially as a singer) but he doesn’t have the magnetism of Young.

The great delight of The Light in the Piazza, it turns out, is that Jeff Irving is not Josh Young. Having seen Irving do the part- all nervous energy and romantic innocence- I couldn’t mentally substitute Young in if I tried. He’d seem too confident, a little too calculated, less inherently trustworthy and open and sweet than I’d want in the part that now in my mind belongs wholly to Irving and his soaring, versatile tenor. He was the best thing about the production (his incredibly moving “Love to Me” was the emotionally clinching moment of the show for me) and I’m sorry I doubted him even for a minute.

The rest of the cast is fine with pretty excellent voices. Patty Jamieson (Margaret) and Jacqueline Thair (Clara) both have the sort of high sopranos that at times chime beautifully and at times grate on my nerves, though both have some lovely dramatic moments. I enjoyed Kelly Wong’s rascal Giuseppe and loved the incandescent Kaylee Harwood as his fiery wife Franca (Harwood has one of the most shining stage presences currently in Canadian musical theatre and it’s always a pleasure to see her perform).

The set is simple but useful, the costumes pretty, the light warm, and the orchestra lovely (shoutout to the MVP cellist Alex Grant). And while I didn’t fall in love with The Light in the Piazza, I did fall in love with Jeff Irving (which I’ve done before, I’d just forgotten) so at least lovely, simple Clara wasn’t alone.

A True One Man Show
The Sadness of Not Being Earnest
The COC’s Spring: Short Fables & Anna Bolena