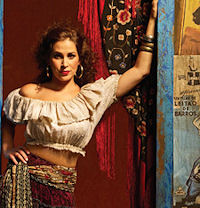 At the Shaw: Maria Severa

The new musical from Jay Turvey and Paul Sportelli brings something very new to the Shaw, even if the plot is nothing new for musical theatre. Essentially a mashup of Carmen’s tropes and Aida’s plot, Maria Severa tells the story of a young Portugese prostitute (the titular Maria) who falls for a man above her station (the handsome bull fighter Armando De Vimioso), who is, in turn, being forced to marry a woman he doesn’t love for her money (Clara da Silva). Maria’s beautiful and groundbreaking music, fado, makes her an important advocate for her people in the poverty-stricken Mouraria, but her love of Armando forces her to choose between love and loyalty. Most of the songs are as derivative as the plot, but as played by an exceptional cast, Maria Severa’s sultry tones are a breath of fresh air in an otherwise dreary Shaw season full of period English living rooms and parlors.

Leading lady Julie Martell is wonderfully feisty but sympathetic, her voice clear and strong, though I don’t quite buy her and Saccha Dennis as prostitutes- they aren’t quite gritty enough. Dennis is wonderful, however, in the other aspects of Jasmine, Maria’s best friend and straight-talking confidante. She sometimes annoys but in her finer moments (such as in the production’s best number “A Prayer is a Boat”), Dennis is perfect, funny and very affecting. The fantastically charming Jonathan Gould does a lot with a little material as Armando’s little brother Fernando- a single lyric about always being second best, delivered perfectly, captures the crux of the character beautifully. Jacqueline Thair is a wonderful Clara, bringing great pathos and desire to the timid character standing in the way of the central love story. Jenny L. Wright is also excellently crass but well-intentioned as Mama and the lovable Jeff Irving tears at your heartstrings as the unrequitedly loving Carlos. As the dashing and conflicted Armando, the infallible Mark Uhre brings it all together with a performance that makes sense of the risks Maria makes for him and of the admiration the population of the play shares for him.

Martell and Uhre bring sizzle to the predictable story, engaging the audience emotionally where they intellectually might have already checked out. Blostered by touchingly human performances from supporting cast members like Irving and Thair, the story is one of the most moving at the Shaw this year. And it certainly is a nice relief, even just for a few hours, to escape the Shavian confines that hold the other productions back.