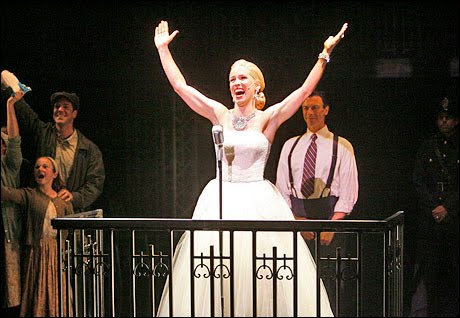 The Stratford Festival took on something big this year in tackling Tim Rice and Andrew Lloyd Webber’s rock opera Evita. For the title role of passionate icon Eva Peron, the company chose their favourite little girl: Chilina Kennedy, a tiny ingenue with a big voice and a knack for ditzy charm. Her husband, Peron, would be played by festival staple Juan Chioran and for all-important narrator Che, an American import named Josh Young was brought in.

The critics generally panned the show, slaughtering Kennedy for her lack of passion and labeling director Gary Griffin’s production gaudy and abrasive. I myself, not a Kennedy fan based on her simplistic caricatures in last season’s West Side Story and A Funny Thing Happened on the Way to the Forum and this season’s other musical Kiss Me Kate, was anticipating that Evita would be my least favourite production of the year with her in the lead. But what I found after tonight’s show was that I have absolutely no desire to crucify little Kennedy with this review. I came away from the theatre tonight with my low expectations easily beaten by the enjoyable production and the odd and unexpected desire to jump to Chilina Kennedy’s defense.

In the interest of fairness, I have to acknowledge that the ingenue was wholly outmatched by the role she was thrown into well before she was even remotely mature enough as a performer. I’m not sure who gets the blame on this one, it could be Griffin, it could be festival artistic director Des McAnuff (lord knows I do love to blame things on Des), it could be someone else entirely. But I’m certainly not going to hold it against Kennedy for trying to tackle Eva. Her performance was, if nothing else, remarkably brave. Unsympathetic, vocally draining and dramatically dynamic, the role of Eva is a mountain of a part. Kennedy was tasked with carrying the production on her tiny shoulders, a challenge the young performer, only in her second season with the festival, faced without a tinge of fear in her eyes. She screamed the purposely unpleasant high notes with abandon, strutted about with character confidence, opened her arms wide to belt to the cheap seats and even allowed herself to be truly ugly in Eva’s sick final days. Chilina Kennedy was offered the chance to play one of the greatest female roles in musical theatre, and she stood center stage, her small frame seeming bigger than ever before, and threw herself in head first, unafraid of the the spotlight hurtling towards her like an oncoming train.

Unfortunately, the train of one of the world’s most successful musicals in the shadow of one of history’s most startling icons, mowed the ingenue down and carried on without her. Vocally she was almost there, so close to nailing Eva’s challenging range that the flaws aren’t really worth mentioning. But dramatically, Kennedy was simply miscast. Her Eva lacked ambition, darkness and sex appeal. She was frothy, charming and innocent with none of the manipulative mind that makes the character truly interesting. Eva needs to sparkle with irresistible fire, drawing the audience into her alongside Peron. While Kennedy did accomplish the great feat of making me cheer for her as Chilina, she lacks the maturity to make me believe in the power of Eva.

I may not have believed in Kennedy’s Eva but I certainly believed in Griffin’s Evita. The accusers behind words like “gaudy” are clearly missing the point of Griffin’s sparkly production. His focus was celebrity, perception and the glamour of man-made icons, gaudy was a sort of requirement. His directions were clever, tricky concepts like a large crowd effect using only a set number of players were navigated well and the production ran smoothly and was well-balanced. At times, character complexity fell to the wayside of larger statements, truly a shame, but ultimately Griffin’s direction was far from terrible.

Chioran’s Peron was unremarkable yet inoffensive, a respectable character reality, whether it was intentional or not is up for debate. Josie Marasco turned in a memorable “Another Suitcase in Another Hall” as Peron’s mistress, something that was both pleasing and somewhat expected from the actress who was a highlight of last year’s West Side as Jet-wannabe Anybodys. The capable chorus was responsible for some of the production’s greatest moments in dynamic numbers like “Peron’s Latest Flame”, assisted by a stellar job on the part of choreographer Tracey Flye.

But the production’s best feature by far was Josh Young, who’s Che was well worth the price of admission and who proved a more than worthy import to Canadian professional theatre. Young’s vocal acrobatics were dumbfounding, his tone beautiful, and he acted circles around the rest of the cast, creating the only truly flesh and blood character on the stage. The way Griffin built Che from well-kempt storyteller to rough-and-tumble revolutionary involved slowly hiding more and more of Young’s handsome features until he resembled an angry mess of an icon even more notorious than Eva (though unnamed, Che is meant to represent Che Guevara). As odd as the stick-on facial hair and wig looked, I appreciated the concept and Young’s charm shone through the extra layers expertly. A heartbreaking line flub (in “High Flying Adored”) kept his performance from true greatness, but a quick recovery that I’m sure fooled fans less familiar with the libretto saved the day.

Ultimately, I love Evita and it would take me a lot to make me forget that. Lloyd Webber’s score and Rice’s lyrics pair with the thrilling story brilliantly and the play’s refusal to pass judgement for or against its heroine makes it all the more engrossing. There were a couple moments when the sound board was delayed in picking up a mic, the wigs sometimes revealed their inauthenticity, the direction lacked some character focus, the music direction was rushed and constricted and the cast was far from perfect, but The Stratford Festival’s Evita makes for an enjoyable night of spectacle.