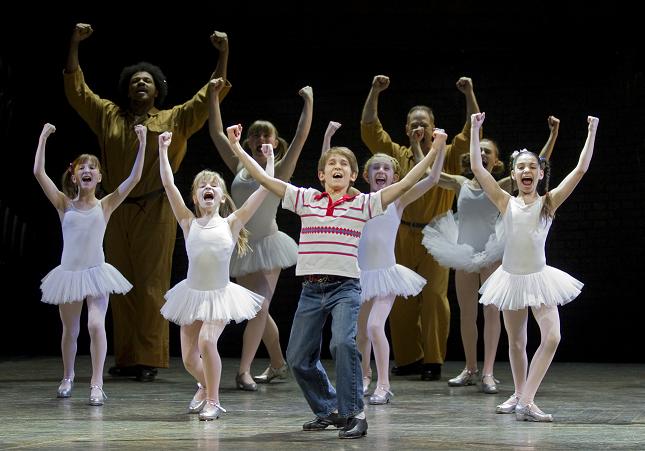 Truth be told right out of the gate, I don’t consider Billy Elliot a great musical. It’s a wonderful story, I’ll grant you that, but Elton John is capable of so much better than the derivative music he puts forward for this adaptation of the hit film. The choreography is lovely but the direction somewhat stale and the tongue-in-cheek juxtaposition of the pretty dancing and the macho miners more often than not undermines the serious stories (both the dancing one and the mining one- both have more gravitas than that). In the current Toronto production there are some strained accents, some shotty singing and the occasional overblown bit of acting. But there were great things too: Kate Hennig is a wonderful Mrs. Wilkinson, infusing the dance teacher with the perfect mixture of warmth and spunk; Armand Schultz is torturously engaging and empathetic as Billy’s dad and Patrick Mulvey is fiery as his brother Tony. The rest of the ensemble is remarkably strong, including the sublime Samuel Pergande in the mature balletic roles. I was particularly excited to see David Light from CBC’s Triple Sensation showing off his triple threat skills in the chorus; (also fun: So You Think You Can Dance’s famously lovable big brother Ryan Kasprzak is the dance captain).

But the show is called Billy Elliot. It’s not Elton John Phones it In or Samuel Pergande Pirouettes or even Miners Who Tap Dance, it’s Billy Elliot. So you know the only thing that really matters? Billy Elliot. The show lives or dies with the kid tasked with the title role. It’s an insane part: an eleven-year-old kid from a down-and-out British family who is simultaneously an everyman and remarkably special, he’s mature, empathetic and kind but also impulsive, defensive and rough around the edges. Oh, and he has to dance. Not wave his arms around a bit and keep the beat, this kid has to DANCE- full ballet technique, lightning fast tap, soulful interpretation and all. He also has to sing and take on one of the most complex character arcs of any kid in musical theatre (not to mention carry the whole show). But I was lucky enough to see Myles Erlick play the role, so none of that seemed daunting at all.

Billy is everything in this musical; it’s a whole different show each time there’s a different kid in the part. So, really, there are 4 productions of Billy Elliot happening in Toronto right now. I’m sure the Caesar Corrales version is great; I’m sure that Marcus Pei brings a lot to the role and JP Viernes really delivers. But I didn’t see those productions, I saw this one.

What I can tell you is that Myles Erlick (the youngest of the bunch at only 12 years old) is one hell of a kid. He set the pace for a brilliant night of theatre as the heart and soul (and astounding technique and style) of the production. The most baffling thing about the young leading man, amazingly, isn’t the question of how he could possibly accomplish the physical feats that he does at such a young age, it’s all the other stuff. Seeing Billy Elliot you are forced to wrap your head around the dancing- it’s mind-bogglingly stellar (especially when performed by little Myles Erlick) and spans multiple genres, but you have to assume that it’s going to be that good. But what’s truly amazing is how a kid from Burlington, ON, who must have grown up dancing to develop technique like he has, how does that kid tap into the put-upon hero of this complex story? How does he unpack all of his training and start from scratch as the character builds up to his standard of performance in front of our eyes? The beaten down sense of trapped resignation, the rough-and-tumble boyishness of a kid from the wrong side of the tracks, the jaunty confident-but-conflicted cool factor- it’s all there, encompassed in the tiny dancer’s body. Myles Erlick somehow manages to be that guy- how, I can’t quite fathom. His Billy is also earnest and optimistic, kind, trusting, loyal; He’ll break your heart with the way he looks at his father in disappointment or make you cry the way he grips the memory of his lost mother in a desperate hug- then he’ll soar higher than any 12-year-old should be able to go and throw himself about the stage with all the passion and aggression of someone old enough to understand the breadth of such things. He’s an exceptional boy, in an exceptional role. I cannot wait until the day young Myles is no longer young Myles, but rather a full fledged principal at the National Ballet of Canada or something comparable. I want to see this kid, 10+ years down the line, dancing Onegin, Romeo, the Nutcracker, the great princes. He has a brilliant career ahead of him, one I will certainly be looking out for.