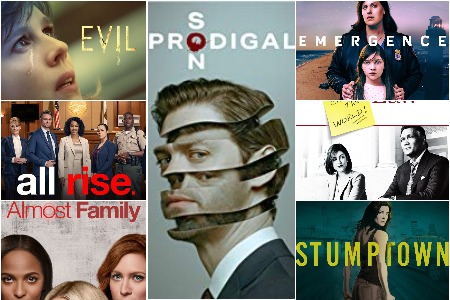 The new TV season is upon us! As we mourn the slaughter of all the great shows that had to die so these ones could live (RIP, For the People and Whiskey Cavalier; you were too good for this world), it’s time to give the new kids a shot. I gave each new show at least 2 episodes to win me over and listed them below in order of how much I liked them.

There’s lots of good news. Six of the seven new dramas are female-led, more than half have people of colour in one of the top two billed roles, every single one is either an original idea or an adaptation from another medium rather than a reboot of an old hit. And they’re actually good. This is the strongest new crop of network dramas I’ve seen in a long time, which is far more than I can say for the comedies.

So, from best to worst:

All Rise
I am so into this show. It’s a little cheesy, maybe a little obvious, but it’s clear-eyed and uncynical in a way not nearly enough things are these days. Three episodes in, this legal drama about an unorthodox judge has already gone a long way towards filling the For The People-shaped hole in my heart. Created by Greg Spottiswood, a Canadian producer I implicitly trust with a network semi-procedural like this one after his excellent comparable work on the sadly cancelled Remedy, All Rise came out of the gate with excellent tonal sense of self and well-defined characters. Hart of Dixie favourite Wilson Bethel is a lovely surprise as a restless good guy lawyer navigating by the north star that is his recently promoted best friend/series lead played by the irresistible Simone Missick. Call me predictable but their relationship is my everything this TV season. An even lovelier surprise is that his lingerie model girlfriend was finally introduced and quickly established as a) smart, b) kind, c) not even a little bit threatened by Lola (at least so far; here’s hoping it stays that way). Lola for her part is married to an FBI agent who barely factors into the show at all and I am so far completely obsessed with this rarely seen concept of healthy, low-drama relationships happening on the outskirts of the central workplace drama. There’s a little romance too, of course, among the incredibly likeable supporting characters, but they’re even taking that pretty slow. All Rise is really fun but also ambitious and optimistic. It’s not the most sophisticated show in the world but it’s the kind of show we need right now.

Prodigal Son
On the other hand, this show is pitch black like a Hannibal wannabe and definitely not putting much optimism and light into the world. But it’s damn good. At least the first few episodes are damn good; the pilot in particular was fantastic. It also is actually surprisingly funny at times, and maybe has my favourite flirtmance of the new TV season (great to see you, Keiko Agena), but it’s absolutely brutal, make no mistake. It could stand to be a little bit more visually unique and I worry about a killer-of-the-week structure going stale once the psychological thrill of the premise becomes familiar, but the dialogue is cutting and the cast is superb. Bellamy Young and Michael Sheen are deployed perfectly and Tom Payne is a contradictory marvel as the tortured, charming, creepy, dangerous, innocent, terrifying main character grappling with the sins of his father and a world of forces pulling him away and pushing him towards the jovial monster in a cardigan and a cage. Prodigal Son is a precariously ambitious proposition of a network show and it’s very easy to see how it could flatten into nothing but it could also transcend everything.

Stumptown
I was fully prepared to hate this stylish ‘rebellious PI with a tortured past’ drama with its cool kid vibe and stupid title but I actually really like it. Nothing undercuts a show’s ability to take itself too seriously like a well-cast Jake Johnson and he’s the standout here in the fall season’s other awesome platonic but not simplistically smooth sailing male-female best friendship in a female-led show (what a great micro-trend!). Now, unlike Mark and Lola on All Rise (I hope), I fully expect Dex and Grey to be madly in love with each other by show’s end and, contrary to my usual stance on this issue, I am so completely okay with that. Their chemistry is off the charts (Johnson’s magic like that) even with total dreamboat Michael Ealy also in the picture and I’m so down to watch a really complicated slow burn development playing out behind the scenes of fun mystery-solving and honest PTSD-facing and excellent quipping. The mixed tape soundtrack trope is a little tired post-Guardians and The Martian but it keeps things fun and was at least 60% responsible for the best opening scene of a new show this year. This show is also based on a comic book which eases my frustration with its style and gives me hope about well-paced episodic storytelling.

Bluff City Law
Daddy issues are the name of the game this season across a lot of the new dramas but this one is the most weighed down by it (crazy that it’s not Prodigal Son, right?). In episodes two and three there’s definitely some reason to believe that this could calm down into a pretty decent, if standard, legal show but they’ve got to let go of the very annoying personal tensions that are just making me resent all the characters.

Emergence
I don’t love mystery shows as a rule, I prefer continuing stories that let you enjoy the moment rather than waiting for the next information drop. I find you can never really tell if a mystery show is any good until it’s over, so it’s hard to say if Emergence is good. I know I like Allison Tolman a lot and Donald Faison’s heartfelt performance as her ex-husband gives the show a really nice emotional anchor, but the jury will be out until the finale on this one. I can definitely tell you it’s not bad, I just don’t know yet if it’s good.

Evil
This one’s too serious for me. It takes a lot for me to fall for a really serious show and this one is pretty dreary so far, which is surprising from Robert and Michelle King who are usually so funny and so good at making me like and care about their characters. It’s not badly made or balanced on a terrible idea so the talent behind the camera makes me think Evil might have some life in it somewhere but, two episodes in, tonally it’s just not doing it for me.

Almost Family
But you know what is badly made and balanced on a terrible idea? This nonsense. American Dreams was a seminal show for me so I will always be at least a little bit loyal to Brittany Snow but the ick factor of this “fertility doctor secretly uses his own sperm to father dozens of children” premise and the forced, treacly tone paired with awkward performances have me very skeptical about this one. Watch this be a show that moves on quickly from its premise and turns into a simple, cheerful dramedy about sisters that I end up liking. Wouldn’t that be something.