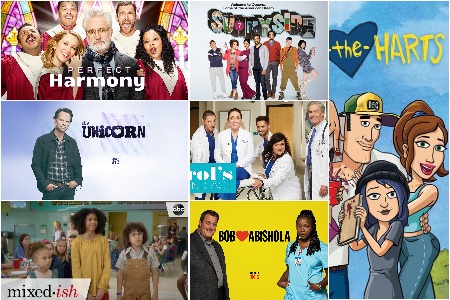 The new TV season is upon us! As we mourn the slaughter of all the great shows that had to die so these ones could live (RIP, Speechless), let’s see if there’s anything worth watching in this new crop. I gave each new show 2 episodes to win me over and listed them below in order of tolerability. I doubt there’s a real hit in the lot but I guess time can still tell.

Perfect Harmony
The first thing you need to know is that none of the new network sitcoms this year are particularly good. But, among the wreckage, this was probably my favourite. Its folksy, derivative, and overwritten (for example, the pretty funny line “Dwayne has a lot of wonderful qualities that Darth Vader does not have” is followed up with the totally unnecessary joke “like a human face”) but I like Anna Camp, love Bradley Whitford, and Geno Segers has already won me over as gentle giant Dwayne so, as long as the limitations of the premise don’t show themselves too fast and the writers prove unable to adapt into a more sustainable rhythm, I could maybe see this one becoming something I like.

The Unicorn
Next up is this CBS single camera that doesn’t totally feel like CBS, which is a compliment. Walton Goggins is a really weird choice for the lead and I kind of hate the “widowers are inherently hot because all other single men are unreliable and untrustworthy skeeezebags” premise but the supporting cast is really strong so I’m hopeful.

Mixed-ish
The first two episodes of Black-ish‘s second spinoff were pretty strong. The only reason it’s not higher on this list is that I don’t consistently like its mother show so I don’t trust the quality to stay high here (Black-ish does like two superb episodes a year then tons and tons of filler). Gary Cole is great and some of the stuff they have him say in the first couple episodes is legitimately shocking which gives this sunny sitcom a really welcome dark side. The cast in general is pretty strong and I personally think the switch from Anders Holm to Mark Paul Gosselaar as the dad is a trade up so I think this one will last.

Bless the Harts
This Southern-set show isn’t really my speed but I quickly fell in love with Ike Barinholtz’s utterly sincere Wayne and I’m glad to see comedy stalwart Emily Spivey get the reigns of her own project. She’s incredibly well connected so expect this animated world to quickly become a who’s who of everyone’s someone.
*episode two airs tonight, I’ll update this once I see it if there’s anything worth saying.

Sunnyside
This one really should have been my speed as its Community-ish study group premise and proven charm-monster leading man (Kal Penn) are full of promise but the first two episodes are slow and just not sharp enough. The upside potential here is strong though. It’s my pick for most likely to improve. I’m keeping my eye on this Moses Storm kid.

Carol’s Second Act
The Raising Hope fan in me is pleased to see Lucas Neff again but this is a hard no all around. The premise is both stupid and played-out (didn’t Nathan Fillion already do this last season?) and the writing is like pulling teeth. Someone free Kyle MacLachlan immediately!

Bob Hearts Abishola
Chuck Lorre must be stopped. I’m okay with a couple shows that sport his name but are really someone else’s game (mostly Mom) but this is a real stinker. What on earth does he see in Billy Gardell? Is this a purposeful attempt to make Mike & Molly in retrospect seem good? Carol’s Second Act is an unpleasant watch but this is a toxic one.