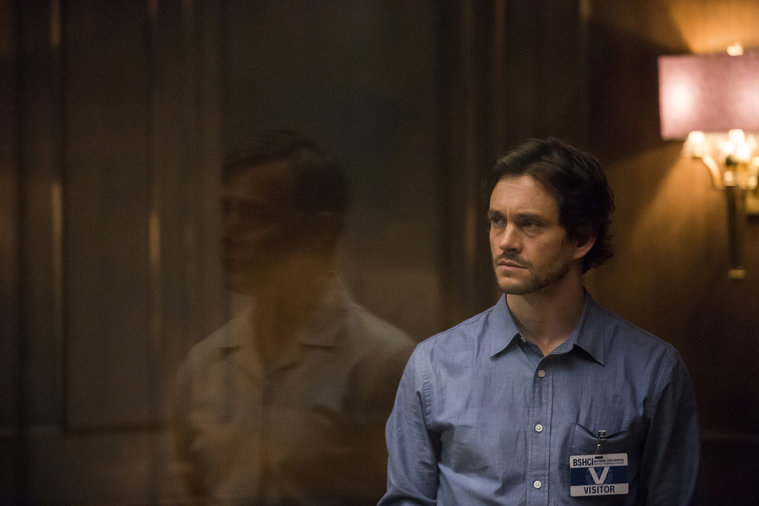 It’s done- Bryan Fuller’s beautiful and haunting Hannibal. There’s been time to watch, rewatch, and rewatch again. There’s been time to reflect – to digest, if you will. (I’m not even going to pretend to be sorry about that. As far as I know, this is my last Hannibal review, and when will I next have the opportunity to try and cram in this much eating-related vernacular?)

While it’s sad the show is over, ‘The Wrath of the Lamb’ was a fitting send-off, a perfect culmination of the story the show has been trying to tell since the beginning. At the heart of Hannibal has always been Will and Hannibal’s unhealthy, codependent relationship. That journey came to a decisive end. Hannibal will be missed, but at least Fuller was able to give fans closure. (Spoilers ahead).

Before talking about the end of the episode, let’s talk about the beginning, which featured an intense scene between Frances Dolarhyde (Richard Armitage) and Reba McClane (Rutina Wesley). Intense an apt word to describe the always dependable Richard Armitage.The physicality he demonstrated as a brutal killer coupled with his expressive face beautifully brought the tormented Dolarhyde to life. Armitage exposed the inner turmoil and insecurities of Dolarhyde and played up his vulnerabilities just enough to start to gain some audience sympathy. Then he’d do something like rip Chilton’s fricking lips off with his teeth and set him on fire and be utterly terrifying.

Opposite Dolarhyde for much of his scenes was Wesley’s Reba. Reba is one of the few characters on a show filled with morally gray (very, very dark gray) characters who could be described as a good person. Wesley more than held her own. Compared to most of the other characters, Reba went through very few internal changes. But she was never boring, as can sometimes happen with characters who are ‘good’. She still managed to be interesting, despite the very crowded supporting cast.

And what a supporting cast. Season 3 is when Alana Bloom finally hit her stride. Season 1 Alana was boring. Season 2 Alana insufferable. But Season 3 Alana. Gone was the clueless, nagging girlfriend figure. Season 3 Alana was finally an equal player on the field. It helps that she actually had some motivation- revenge, and protecting her new family. It also helps that she understood what was happening, not stubbornly defending Hannibal from accusations that were completely true. It’s a shame we didn’t get to meet this version of Alana sooner.

Chilton is another character I couldn’t stand earlier on but ended up rooting for. For the life of me, I can’t remember why I used to hate Raúl Esparaza’s smarmy doctor. If the show had ended with everything on fire and Chilton rising from the ashes with a new book to sell, I would be fine with it. He would deserve it. Every season, he would receive some new horrible injury – having his intestines removed, getting shot in the face, getting set on fire – and that magnificent son of a gun would survive and find a way to make a profit. Did Chilton grow or become a better person? Absolutely not. It’s kind of inspiring how Chilton could go through so many terrible things and stay true to his opportunistic, smug self. I’m going to imagine that once Chilton recovers, he makes a talk show deal or something.

Rounding out other key players this season were Gillian Anderson’s Bedelia and Laurenece Fishburne’s Jack Crawford.  Bedelia remained a mystery. She put in a lot of effort surviving her interactions with Hannibal, which would have been more impressive if she had done the most obvious thing to keep herself safe – not run away to Europe with Hannibal in the first place. Sure, travelling with Hannibal looked glamorous and fun, but was it worth the risk of being eaten at the end of it?  Even though she didn’t always make sense, Anderson slunk around and delivered her dramatic lines with such style, and had such a mesmerizing chemistry with Mads Mikkelsen’s Hannibal, by the end, it didn’t matter why Bedelia was there, because she was such a delight to watch.

Jack Crawford was a lot less ambiguous. He was there to deliver his version of the law. Sometimes that involved following actual laws, and other times, it involved deviating from them. It’s kind of amazing the FBI never fired him. Then again, it’s a good thing the FBI didn’t, because Jack was key in getting them to agree to a poorly thought out plan – letting Hannibal out to serve as bait for Dolarhyde. It wouldn’t have been the series finale without some kind of poorly laid plan that Hannibal would flip to his advantage.

It also wouldn’t have been the finale without the show’s beautiful cinematography. While the show gorged itself on gorgeous, artsy shots in the first half of the season, the second half controlled itself a a little more. ‘Wrath of the Lamb’ demonstrated more restraint, which was necessary to keep up the episode’s fast pace. Of course, the episode still looked beautiful – the dragon wings during and after Dolarhyde’s final fight with Hannibal and Will were particularly stunning.

And about that fight… after three seasons of dancing around each other and of Will being obtuse, he finally embraced his murder husband. (I wish I could take the credit for the phrase “murder husbands” being applied to Will and Hannibal, but that credit goes to Freddie Lounds, who was sadly but understandably missing from the finale. The episode was packed enough as it was).

At its core, Hannibal is a love story. A very dark love story, but a love story nonetheless. I’ve heard people argue about what kind of love is at the center of the show, which I’m not going to get into here (Except to say that the phrases “in love with” and “ache for him” and the aforementioned “murder husbands” were tossed around pretty blatantly towards the end of the season). What is hard to dispute is that Will and Hannibal recognized something in each other, and for all three seasons, Will tried to reject the darkness he found in himself. Hannibal of course, encouraged its growth.

‘The Wrath of the Lamb’ was all about Will’s ‘becoming’ as they called it. He finally embraced Hannibal – literally and figuratively- before dragging them both off the side of a cliff. It was acceptance, but also one last act of defiance from Will. His and Hannibal’s relationship evolved into something so unhealthily codependent, Will couldn’t kill Hannibal and live without him. But Will wasn’t in so deep that he couldn’t recognize he had to stop Hannibal, or still want to avenge himself and some of Hannibal’s victims. So after finally giving Hannibal the acceptance he so desperately sought Will also carried out his one last task. It shouldn’t have been a surprise, but everything leading up to it were so engrossing, that when it happened it was a bit of a shock, before making perfect sense.

There are still so many things Bryan Fuller and his team could have shown us. What horribleness will be inflicted on Chilton next that he will somehow survive?  What happens to Bedelia? Will Alana and her family be okay? We might never know. (Then again, we might. If some benevolent entity decides to resurrect the show.)

There is also the potential to further explore Will and Hannibal’s relationship. (In the post-credit scene with Bedelia, there were after all, three places at the table, so it’s possible both men survived the fall). But if the show is permanently dead, Will and Hannibal’s story concluded in a place that made sense. It was a place they had always been headed towards. Their last scene together felt like it was Bryan Fuller giving one last meta, loving farewell from the show to his viewers.

“This is all I ever wanted for you, Will. For both of us.” Hannibal/Fuller says.

And it was. It really was.