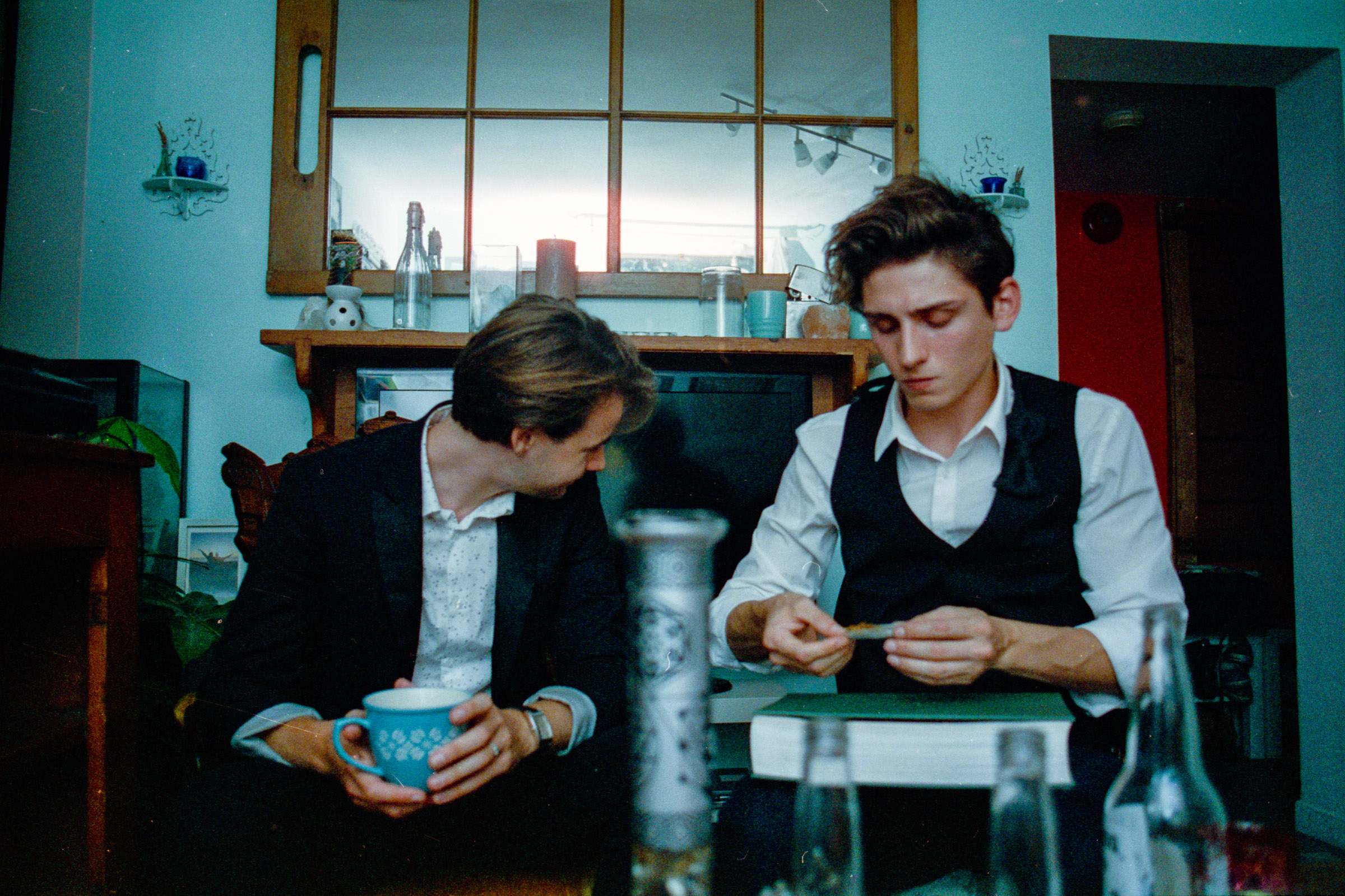 Matthew Finlan & Landon Doak’s original episodic musical Life in a Box was not only my favourite production of the 2018 Toronto Fringe, it’s one of the most inventive and promising new ventures I’ve seen in theatre in a long time. Structured for endless serialization with a web series component that opens the door to markets beyond Toronto, Life In a Box has the potential to be really big. Which it deserves to be, because it’s really good. Finlan’s script is clever, funny, and heartfelt and Doak is for my money the best young musical theatre composer on the scene right now. Together they combined to earn the show three Critics’ Pick Award nominations: Outstanding New Musical and Outstanding Leading Performance in a Musical x2.

Landon: When I was a kid, I had no real extracurricular activities. I liked to sing and play pretend around the house while my brothers were at hockey or karate. So one year my mom asked “have you heard of musical theatre? It’s like Grease!” and I loved the film Grease. She signed me up for a community theatre production of Gilbert and Sullivan’s Pirates of Penzance. I got the lead role. It was the greatest experience of my young life at the time

When did you know you wanted to be theatre artists?
Landon: The closing night of Pirates of Penzance. It was the first and only thing I was truly good at.

Matthew: When I was fifteen I played Daisy in Christopher Durang’s Baby With The Bathwater, it’s a crazy show; crazy in a good way I think. It was my first exposure to a piece that really tested the audience and the actors. I have been hungry for that kind of work ever since. I think those principles certainly come into play with Life in a Box.

Landon, how old were you when you wrote your first song? What was it about?
I wrote a song on the ukulele in my grade 9 vocal music class. It was about having a bad cold. It was profound and relatable and had a dope chorus.

How did you meet/begin collaborating?
We met back in September 2012, on the first morning of theatre school. Not at the conventional meet and greet though. We both unknowingly arrived an hour before we were supposed to and walked into the wrong class together! It was actually at theatre school that we joked about creating a musical called “My Life in a Box” which later developed into Life in a Box. We were both big musical theatre fans and knew we would pursue it after school. Our first collaboration was singing Christmas carols. One night we were hanging out, very stoned, and Matt started singing silent night. Landon joined in with a tight harmony and we were astounded by our blend. We also sung a lot of One Direction together. From theatre school onward, we have worked together on quite a few projects: Pirate’s Life, American Idiot The Musical,Romeo & Juliet, Peter Pan, A Woman of No Importance, The Dumb Waiter and now Life in a Box. It’s fair to say we enjoy working with each other.

Before Life in a Box, you worked together on Peter Pan with Bad Hats Theatre. Tell us about that experience and how it’s evolved since development first started.
Just before Peter Pan we cut our teeth doing a new musical of Romeo and Juliet (music by Landon), followed by a production of American Idiot the Musical with YES Theatre in Sudbury. These two shows brought together a lot of the cast and conceived the idea of adapting a long time favorite of ours Peter Pan. Peter Pan was a laugh filled riot, with everyone working for free, so the goal was to make the best show we possibly could, and to have the most fun doing it. The stakes were super low back then, and we believe the show’s joy is so alive because of its humble beginnings. It’s become more polished and refined over the years, but the heart we gave it in the early days is still beating!

Life in a Box is an ambitious concept. Where did the idea come from to make a hybrid webseries/live show that was also an original musical?
In retrospect LIAB is a very ambitious show, but we never really thought of it that way during its conception. Our goal was to create something that we ourselves would be thrilled to watch, something that would compel Netflix Lovers (ourselves included) to go to the theatre to watch a show. When we lived together at the Shaw Festival in 2016, our strange little cottage has a square window cut out of the wall between our back entrance and the living room. We used to perform skits behind it to make the other laugh. This is how we decided on the “puppet theatre” convention as it lends its self nicely to the cartoon nature of the piece. It was then that we realized performing in a single frame would translate very easily to screens–we don’t have to change the content; we just adapt the medium. It’s an experiment for us too, and we love experiments.

The show has a throwback adventure quality to it. What were some of the cultural influences you were drawing on?
We drew inspiration from classics like Back to the Future and Doctor Who, and more recent films like Interstellar and Dude Where’s My Car? We also didn’t shy away from some of our favorite cartoons like Adventure Time, Rick and Morty,Family Guy and most recently Final Space. We’re huge fans of science fiction and conspiracy theories. We love the cartoon universe because no matter how high the stakes become, devoted audiences still buy in!

Matthew- tell us about the structure of the book. How in the weeds (forgive the pun) did you get with the time travel logistics?
The storyboard for this show existed for a while in our collective minds. Once we agreed on an overall series concept and the trajectory for episodes one and two, I took to writing our first draft. Undoubtedly the trickiest part in writing the script was finding a “logical” way to time travel, and then staying true to that logic. Fortunately, I love reading about time travel, parallel universes and conspiracies theories—so it was a challenge I felt up for.

How much of the characters and relationship in the show is true to life?
We would say it is all true, it’s just been blown up a little for your entertainment. It is our authentic relationship…if we existed as a cartoon!

The music and lyrics are credited to Landon and the book to Matthew. How much influence did you each have over the other’s writing?
The plot structure was a true hybrid, developed by having long conversations around a bong. Once we had a clear idea of the story we decided which moments should be text and which should be song. It was the easiest way to distribute the work. Rarely do we butt-heads, if ever. We’re lucky to have worked together on enough projects, that now we have a language for creating new work. All this to say, we have complete influence over one another’s work, but it’s welcome and essential!

How much did the show change through the rehearsal process with director Rebecca Ballarin?
Rebecca was fantastic in the room. We approached Rebecca with a clear vision for the show and she helped us bring that vision to life. She was an impeccable outside eye and knew the perfect way to guide our creation to make the story as clear as it could possibly be. She trusted us to work moments out on our own, and we trusted that she wouldn’t let us make fools of ourselves (in a bad way). Rebecca also helped us find the comedy by being a generous audience member and laugh track!

Do you have a favourite moment in the show?
Landon: The moment we finish the song “Earth Angel”. It gets a big applause, and it is the hardest song in the show to perform. I feel relieved when it’s over, ha!

Matthew: The moment in episode two just before we try to get home. Matt and Landon realize it could be the last time they ever get to hang out. It’s a moment that encompasses a lot of what the whole crazy journey is about; friendship, trust and the beauty of the little things.

The Fringe production was episodes 1 and 2 of an ongoing series. When do we get more? Is there a set number planned or could it be serialized into oblivion?
Life in a Box could most definitely be serialized into oblivion, we have enough stories to tell and songs to sing! We will be broadcasting the next chapter of LIAB before the year is over. Stay tuned for a re-run of episodes 1 & 2, and a brand new episode 3!

What are you working on now/next?
Landon: Auditioning, and writing a musical for Bad Hats Theatre, and YES Theatre. Lots and lots of song writing!

Matthew: I’m currently writing more episodes for Life in a Box and auditioning (as one does).

Do you have anything you’d like to add?
We smoke a lot of weed in the show. We believe weed is an outlet and conduit for creativity. It’s also culturally relevant right now. But in the show, weed really just acts as an emblem of hope. By no means do you have to enjoy weed to enjoy this show.