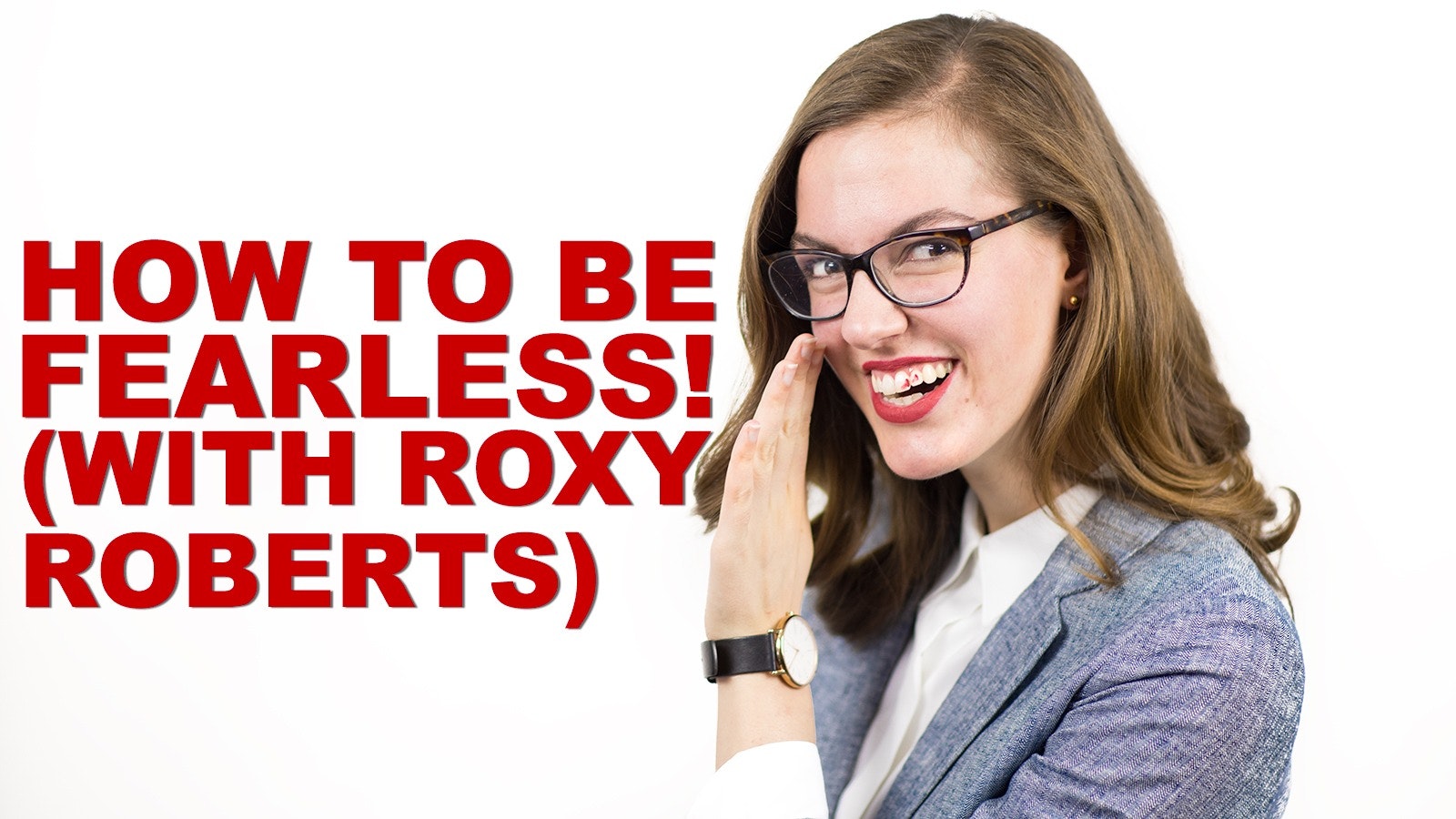 How to be FEARLESS! (with Roxy Roberts) (A)
Fed up with being harassed, stalked, and threatened, Roxy Roberts (Playwright/Performer Ali Joy Richardson) leads an unorthodox seminar on how to defend yourself and live without fear in this hilarious site-specific show about a motivational speaker. Ali Joy Richardson is a force to be reckoned with. Her comedic timing is perfect and her energy levels are insane as she imbues the indomitable Roxy with as much spirit as Leslie Knope. Just about everything that can go wrong does for Roxy, who arrives late due to a flat tire on her bike and immediately experiences setbacks. As scheduled guests fail to appear and technical difficulties put her audiovisual aids out of commission, she maintains the chipper façade of a woman just barely holding it together. Richardson’s script is wildly funny and, by the end, surprisingly profound. She nails the motivational speaker buzzwords and methodology, using techniques such as visualization and, of course, a PowerPoint presentation (where self-defence moves are given names like “Netflix and Kill”). Audience participation is encouraged as we high-five our neighbours and try out our best angry faces to achieve the optimum effect against leering men at Starbucks. Inspired by the insidious safety advice that women receive on a daily basis (fake a phone call, clutch your keys, etc.), How to be Fearless questions at what point the safety precautions we’ve taken hinder our ability to live life to the fullest.

One Small Step (A-)
Anika Johnson and Barbara Johnston’s new musical within a musical is a love letter to high school theatre. When their annual musical is cancelled, a group of drama students decide to put on a show of their own, but there’s a catch; it has to be Canadian in order to receive funding. The result? The Hadfield Follies, a musical about Milton’s favourite son, astronaut Chris Hadfield. Led by Kelsey Verzotti in an earnest performance as aspiring actress/student director Jill, One Small Step features a large and diverse cast of emerging artists, who are all double or triple threats. When they’re given moments to shine, the talented cast is more than up to the challenge, with standout performances coming from Verzotti and Kryslynne-Mai Ancheta (as Jamie, the show’s composer), but the size of the cast and runtime of 75 minutes means that giving each person time in the spotlight is difficult. This is the rare Fringe show that would actually benefit from being a bit longer. The songs aren’t particularly memorable or catchy, but I enjoyed them within the context of the show. The dialogue is pop-culture filled and may end up dating the show if it has a life after Fringe, but One Small Step finds a lot of natural humour in the dynamics of high school, individual characters’ quirks and jealousies, and in the time-crunch drama of teens trying to cast, costume, and perform an original musical. This is a musical for people who love musicals. It’s for people who enjoy an earnest song about the power of art to move us, and for those who will appreciate the musical references that choreographers Barbara Johnston and Gray Monzka have cleverly built into the opening number. Drawing a connection between space exploration and creating art, both of which have the power to inspire and amaze, while constantly under threat of funding cuts, One Small Step is sweetly optimistic about the possibilities that await us if we dare to dream.

Fallsview to a Kill (B+)
When the villainous Dr. Thompson sets his sights on Niagara Falls, it’s up to disgraced former S.M.A.S.H. agent Jake Brand to thwart his nefarious plan. In Low Fidelity Productions’ comedic homage to all things Bond. James Bond, the six-person cast play supervillains, spies, henchmen, and any other role required… including animals. The genre-aware cast have put together a narrative framework of scenes – there’s the visit to “Q” for gadgets, the assignment from “M”, and the capture of an agent by the supervillain – which help keep the show moving, but Fallsview to a Kill is improvised based on audience suggestions. Although the audience was a little slow on the uptake at the performance I attended, the performers made magic (and some pretty great puns) from the ideas they received. There’s a real sense of camaraderie from the cast, who play whatever minor and major roles are necessary to earn a laugh and advance the story. I was especially impressed by Jon Blair, whose alcoholic former spy carries the weight of the world on his velvet tuxedoed shoulders, and Kat Letwin, who steals every scene she’s in as an ineffectual and vain “M”. Come prepared with your best Niagara Falls-related suggestions and settle in for an immensely enjoyable show.

All of Me (B-)
Presented by Theatre Insomnia, All of Me creatively explores how the brain deals with anxiety and depression, but the script and delivery need some work before it lives up to its potential. The show gets off to a strong start as it shows the brain in action, guiding the daily life of Allison (Hilary Wirachowsky), a typical millennial. She hits snooze on her alarm, bargaining with herself for more sleep, checks instagram when the subway is above ground, and can’t function without coffee. Video projections at the back of the stage are used to great effect to make us feel as though we’re seeing the train and the office through Allison’s eyes. Throughout the day, Left Brain (an excellent Jonas Trottier) and Right Brain (Jennifer Busuttil) banter and disagree about the choices Allison should make, but always with her best interests in mind. Busuttil’s delivery is a little shrill, which can make it difficult to hear her speak, but Right Brain and Left Brain have terrific energy and the dialogue is spot on. When Allison comes under a lot of stress at work though, Anxiety (Kathryn Geerstsema) and Depression (Catt Filippov) vie for control. Unfortunately, at this point the show begins to sound more like a PSA on mental health issues than it does an engaging and educational show. The dialogue is filled with clichés and the characters of Anxiety and Depression come across as wooden cartoon villains. Conceptually director/playwright Ashley Elliott seems to be trying for a darker, more grown-up Inside Out, but the execution in the middle section of the show just isn’t there. As someone who has experienced mental health issues, I applaud All of Me for showing how anxiety and depression can disrupt day-to-day life, but the script and execution, especially where Anxiety and Depression are concerned, need some work.

High School Symphony (C)
The kids are not alright. Billed as a Big-Band Mean Girls, Teeny Tiny Music Show’s High School Symphony is overambitious and lacks direction. The semi-autobiographical story revolves around a friendship between two Catholic school BFFs, popular girl Marisa (Cate D’Angelo) and straight A student Hayley (playwright Hayley Pace as her younger self), who get into trouble. Marisa is suspended and sent to public school for the rest of the year while Hayley faces none of the consequences. When they reunite in high school, they find their friendship has forever changed. Pace’s script perfectly captures middle school and high school dynamics, with all of their awkwardness, note-passing, and petty jealousies, and there is a genuine rapport between Pace and D’Angelo that makes it easy to believe they’re long-time friends. D’Angelo obviously relishes playing the Regina George role, and Pace is sympathetic as the narrator looking back on her high school self, but the rest of the cast consists of male musicians, many of whom are acting for the first time. As a band, they’re stellar; they set the scene with bluesy opening music and their musical talents are on display throughout the show, but it’s very clear that this is what they want to be doing, not acting. Using high-pitched voices, they gamely try, but there’s not enough experience or commitment to make the performances truly camp or funny and they just fall flat. I’m at a bit of a loss as to why Hayley Pace, the founder of Teeny Tiny Music Show, would choose to write a Mean Girls-inspired show for her largely male company of amateur actors. When the playwright is also the star of this story, it seems a self-indulgent choice. High School Symphony would also benefit from a smaller venue and/or more focused direction. Set loose in the Randolph Academy Theatre, the cast use the aisles and balcony just for the sake of using them, rather than to serve the story. There’s even a scene where musicians play ‘keep it alive’ with a beachball in one of the aisles, bonking multiple audience members on the head in the process. I love the idea of a marching band theatre company and it’s obvious that there’s a lot of talent here, I just wish they were working from a script that better reflects the composition of the company and more directly incorporates the band.