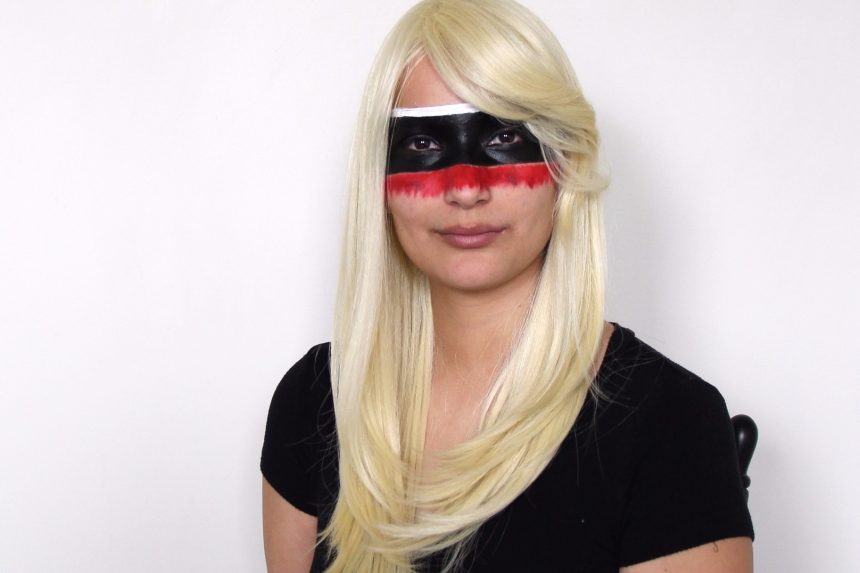 This is a story that needs to be told and should be told but is not for the faint of heart. Writer Darla Contois explores identity on multiple fronts, the first being the lack of recorded history for Canadian First Nations which causes Eva, the title character, much grief. Eva has a distinct identity to the audience but to herself it is muddled in comparison to her friends, if they can be called that; the tragic history of her parents and ancestors; sexual trauma; and her constant feeling of being erased. Like any teenage girl, her concept of self is jumbled, changing within the same sentence. And because of that White Man’s Indian feels authentic. Eva’s strength and good nature made me wonder about the struggle between nature and nurture, and the hope that goodness does triumph even when all odds are against them.

This is a show where you will connect with the character but don’t enter it lightly. In the pedestrian and comedic telling, Eva will bring you into dark corners of her life that you won’t be able to forget.

The audience enters and Jasmyn Fyffe is standing half naked, waiting for the audience to place stickers with words like “never”, “foreigner” and “coco” all over her back, arms and head. This was the first moment in a show that was raw, uncomfortable and had many instances of strong emotional connection.

what do you see see? looks at the body as political. Instead of focusing on facts, lists of events, descriptions and information driven movement, Fyffe takes you on a journey of what it feels like to have her body. It was honest and effective. In years to come, I may not remember what happened in this show but I suspect I will remember the uneasiness I felt leaving the theatre.

In one section of daring choreography, she stared down the audience and her facial expression brought us through a story of emptiness, pleasure and excruciating pain.

Despite Fyffe’s exploration of the darker side of her identity, there is also a comfort in her body and a joy she has in her movement. This is a show that borders on elegant while being a sober awakening of a woman’s experience.

Writer and performer Djennie Laquerre is the pure embodiment of delightfulness. She tells stories of her childhood that are divided between Haitian and Canadian culture, weaving together the objective world with a more powerful and magical one. When Laquerre was a new immigrant in Canada, her Mother wanted to deny any mystical elements of their history but through illness and necessity, a fine balance between both cultures was found.

The concept of Wild Rabbit dance projects’ Ruin Road, three dancers exploring a dark labyrinth, was successfully executed. It was clear, overly so, that the dancers were trapped and were unable to escape. Unfortunately, the sentiment trickled into the audience, making them feel trapped in the theatre. The dancing was good, absolutely, but it was difficult to appreciate with the monotone apocalyptic soundtrack. The narrative didn’t move beyond the one dimension of being constricted, making it hard to connect with the movement. Had there been any contrast, either from the musical selection or variation in the storyline, the choreography would have been more powerful and the audience wouldn’t have drifted off.

“Play Of The Day” Ad Auction
If you get a good review (B or better), you can bid to become our Play of The Day (prime advertising spot at the top of the homepage AND here on our SummerWorks landing page). Bidding starts at $5 a day. Whomever is the highest bidder as of midnight each night of the festival gets the spot for the next 24 hours or until their bid is beaten (whichever comes second). To bid, just submit a .jpg of your poster to toronto@myentertainmentworld.ca with the subject line “Play of the Day” and be sure to mention your bid price in the email.