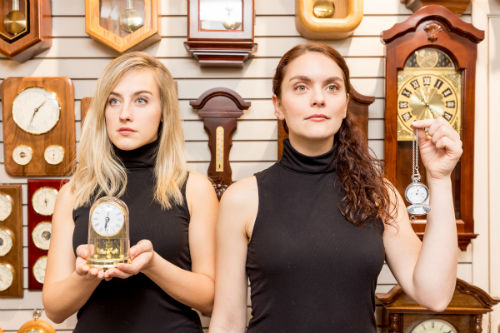 About Time (A-)
The Templeton Philharmonic always deliver creative, hilarious, insightful work. This excellent sketch show that glimpses moments in time from the very start to the hypothetical future is no exception. Highlights include an Oracle of Delphi who speaks exclusively in cliché and a pair of Entertainment Tonight-style correspondents reporting live from the scene of various weddings throughout history. The show stands out among sketch pieces for its trademark Templeton zaniness but also for its storytelling cohesion- this is theatrical work from theatre artists who know that sketch doesn’t always have to be small, it can be parts of a whole in a really thrilling way.

Hands Down (A-)
The somewhat forced villain role and dopey judge who didn’t seem to be purposefully dopey are the only things that don’t work in this excellent real-time ensemble comedy. Four compelling characters are locked in a battle of endurance to win a new car, a familiar conceit, but playwright Warren P. Sonoda makes an unexpected choice in letting camaraderie rather than adversity fuel the action. Cynicism seems to finally be fading out of fashion and a play like this folds endearingly into that trend, allowing the characters to sense the goodness in each other and join forces. Christian Potenza manages to highlight the humanity in the play’s most outlandish competition addict character and his relationship with a relatably exasperated Jane Luk is the play’s most interesting dynamic. Xavier de Guzman and a particularly amusing Mathew Isen are equally endearing as younger competitors who contemplate forming a Survivor-style alliance. It’s a testament to excellent character work that the audience just sits and watches people touch a car for an hour but still feels it’s over too soon.

Meant (A-)
This clever romantic drama written by Kyrah Harder and directed by Robynne Harder dances between genres and subverts expectations to strong emotional effect. It either needs to not be a musical or be more of a musical because right now the songs all have a bit of a surprise “oh, right, they sing” feeling to them (and almost no one in the cast is a better singer than actor) but the story is so smart and grounded that structural and performance problems feel somewhat minor. Thom Nyhuus gives the most interesting performance of the lot as a mysterious bringer of bad news though the playwright’s quiet moments of uncertain heartbreak as her own leading lady Hannah steal the show.

On the Inside (A-)
Most stories you hear about the prison system and its many abuses are American stories and we as Canadians have a bad habit of assuming that that’s their problem. What Michelle Thoms’ harrowing play inspired by the death of one of her former students reminds us is that we need to take responsibility for what goes on in this country, even if it grabs fewer headlines and inspires fewer Netflix series. A well-acted, well-written, well-directed drama that so many people need to see.

You Are Perfect (B+)
I always find stories about Charles Manson fascinating so this prison-set piece about his devotee Susan Atkins held my attention easily. The twist would land much more effectively if the cast were more evenly talented (Lindsay Danielle Gitter is excellent as Susan but Alexander Reed and Kristin Samuelson as Manson and “The Woman” need some polish) but Rhys J McClelland’s direction is effective and the practical choice to have the overhead projections changed by a visible shadowy hand resonates on a fascinating thematic level. A very engaging if somewhat shoddily executed production.

Motherland (B)
This somewhat simplistic story about an Armenian man who struggles to leave his mother behind succeeds on the charm of Erik Mrakovcic’s central performance. Both Davit and the Parisian woman he falls for (Konstantina Mantelos) are written as overly perfect people (he’s sweet, funny, kind and charmingly slow to embarrass; she’s so cool it hurts) and Davit’s mother (Susan Q Wilson) is a little too simply bananas, making Davit’s story more of a tragedy of confinement than an examination of tension.

A Flea in Her Ear (B-)
An adaptation of a Yugoslavian classic, this crazy farce has about 472 characters and an unending stream of plotpoints. Director Aleksandar Lukač leans hard into the wackiness with big swing character interpretations and larger-than-life performances (not to mention production designer Jingjia Zhang’s amusingly loud work) but with a story this crazy I’m not sure there was any other way to go.