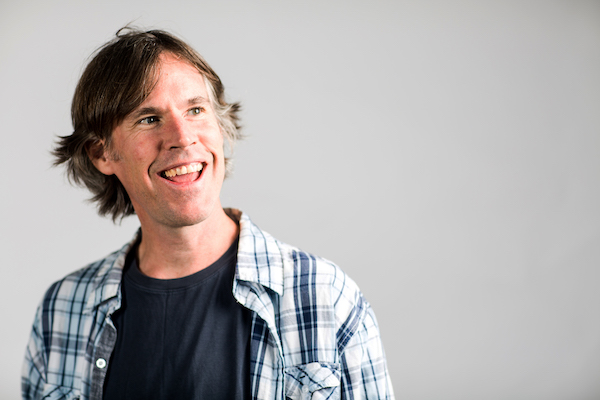 Delirium (A)
Martin Dockery’s storytelling style is almost manic; he speaks a mile a minute and moves about the stage with such restless energy that his few moments of stillness are shockingly poignant. In Delirium, he tells three stories (plus various stories-within-the-story) about love, connection, life and death, set variously at Pearson Airport, the London Ontario convention centre, a butterfly habitat in Mexico, a Brooklyn studio apartment, and Burning Man. I laughed consistently and thought quite a bit but, most notably, I left crying. Dockery’s work demands a lot from his audience. You have to focus intently and trustingly run along behind him as he leaps and bounds through memories and ideas and metaphorically rich explanations of monarch migration patterns. But he rewards your focus and trust ten-fold, tying everything together in a moving conclusion that draws profound meaning from what at first glance was merely a series of engaging high-energy stories. See Delirium if you can and, ideally, pair it with…

Moonlight After Midnight (A)
Dockery’s second piece at the Fringe is a two-hander performed with his wife Vanessa Quesnelle (a major off-stage character in Delirium, so the two shows really are best experienced together). It’s a haunting work of beguiling fiction, weaving together timelines of reality, fantasy, memory and roleplay, impactfully refusing to clarify which is which. Both actors deliver natural, emotional, funny performances that showcase their excellent chemistry and Quesnelle scores key scenes with a gorgeous sultry alto voice singing loves songs with all the ache. A true Fringe gem performed with little tech and minimal set, Moonlight After Midnight deploys text and performance to stirring, confounding, unforgettable effect.

A Peter N’ Chris-tmas Carol (A)
Peter Carlone and Chris Wilson could fall back on a lot of things- strong connections, best-in-the-biz natural comic instincts, indomitable charm, enough critical accolades to fill a book- but what makes them legendary is that they don’t. Peter N’ Chris were always going to sell out their Toronto Fringe run, and it was always going to be pretty well received on baseline talent alone, but instead of just let that be enough, Peter N’ Chris wrote something thoughtful and complicated, rehearsed it to clock-like precision, and literally break a sweat performing it full-out. A Peter N’ Chris-tmas Carol follows the duo’s patented formula to a degree but it’s packed with surprising moments and awesome payoffs. I’d tell you to see it, but they’re Peter N’ Chris, you already know you should see it.

Interstellar Elder (A-)
The boldly odd Ingrid Hansen is a genius of physical comedy and this solo show set on a post-apocalyptic spaceship where she’s been selected for Chris Pratt-style early defrost is literally just 75 minutes of her being a genius of physical comedy (with some poignant moments of vulnerability and heartbreak thrown in because that’s how geniuses roll). It drags in the middle (60 minutes would likely suffice) but Interstellar Elder is a sight to behold.

Murder in the Cottonwoods (B)
This silly murder not-really-a-mystery is well played by a strong cast highlighted by the women- a sharp-as-steel Christy Bruce as an uncompromising debutante type and an extremely sympathetic Alexandra Hurley as her self deprecating but golden-voiced daughter who begins the play covered in blood. More twists and turns and a faster pace would help keep the energy up, and the lack of depth got me down, but it’s still pretty fun.

Happy Family (C)
This trite family drama by Shelley M Hobbs reduces its three adult sibling characters into very broad archetypes. Kristi Woods and Leonard Scott-Collins battle valiantly to make something of their nothing characters but Adèle Power struggles to remember her lines even though I saw this show halfway through the festival. It’s not a catastrophe, it’s just nothing much.