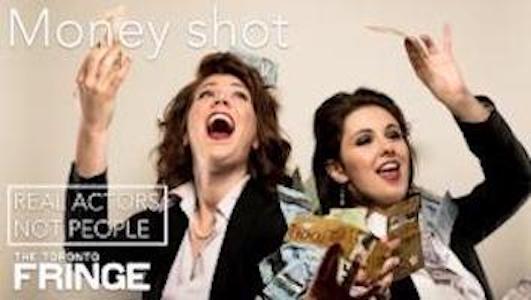 Real Actors. Not People. (A)
The definitely real people (and also actors) who wrote and star in this charming two-hander have created a Fringe piece that seems designed in no small part to justify their company’s existence. As someone who spends an inordinate amount of time trying to justify my own company’s existence, it hit me right where I live. Vikki Velenosi and Kasey Dunn’s Brick & Mortar– a small organization that provides affordable rehearsal and performance space to indie artists across the city- has faced roadblocks from inconsiderate tenants to corrupt landlords to bitter social media criticism and it’s clear that Velenosi and Dunn have found the uphill slog fairly thankless. By telling their story with humour, grace and creativity in this autobiographical musical show, Velenosi and Dunn are calling out how hard it is to start something in this city, how impossible it is to keep that thing alive and, ultimately, how worthwhile it can be. The Brick & Mortar ladies’ rent-negotiating, toilet-plunging, fussy artist-tolerating determination is incredible and the artistic output their spaces and support have facilitated in the last few years is incredible. Anyone paying any attention at all to the Toronto indie theatre landscape knows the key role The Box, in particular, has played in making self-producing a possibility for artists who’d otherwise be stuck waiting around for a call that might not come. It was deceptively marketed as something more vapid than it is but Real Actors. Not People. is a hilarious, moving, motivational ode to getting shit done, made by women who have gotten some seriously invaluable shit done.

Welcome to the Bunker (A-)
I’d seen two terrible shows in a row when I found myself in Katie and Todd’s TPM Backspace-shaped bunker riding out the zombie apocalypse. I’d been on an unfortunate roll of self-serious and cynical work performed by unskilled actors. This is not that. This is the opposite of that. This is so the opposite of that that I literally almost burst into tears of relief when met with the sweet, grounded, well-produced charm of Welcome to the Bunker. Written by the performers, this real-time two-hander rests on the shoulders of quirky ray of sunshine Clare Blackwood (Katie) and wry survivalist Ryan F. Hughes (Todd) who foil and complement each other perfectly as the odd couple tenants of a bunker that’s just taken on a full theatre’s worth of newcomers who now have to attend “Welcome to the Bunker” orientation. The script has plenty of laugh-out-loud moments, most bolstered by Hughes’ dry delivery, but the catastrophic tragedy that is merely pretext for most post-apocalyptic shenanigans presses hard against the bunker’s walls, raising the emotional stakes and our investment in these characters. Katie is a particularly refreshing kind of hero- a woman trying with all her might to be happy and kind in a world that is neither. Her slideshow presentation might be compromising the clean air supply but nevertheless her company (and Todd’s) will do you good.

Ten Creative Ways to Dispose of Your Cremains (B+)
Playwright/performer Rose Napoli’s second script, as directed by Carly Chamberlain, plays like a self-aware gender-flipped mid-2000s indie rom-com. Lucy (Napoli, harsh and snarky in all the best ways) is the neurotic hero unable to move on from a tragedy; Bennett (Jakob Ehman, typecast but appealingly so) is the manic pixie dream boy who’s just damaged enough to teach her about life or whatever. Together they make fireworks out of her father’s ashes. It’s too quirky, too hip, too neat to be honest (it’s also too darkly lit and too loudly scored) but Napoli and Ehman are incredibly winning and the script has enough distractingly delightful quips that you’ll likely find yourself too distracted and delighted to think too hard about everything that doesn’t quite sit right. I expected more from this proven set of talent but that didn’t actually stop me from liking Ten Creative Ways to Dispose of Your Cremains. I also liked mid-2000s rom-coms, for the record.

Madeleine Says Sorry (B)
Madeleine Brown’s first foray into playwriting reveals a strong sense of how to build a premise and showcase her own strengths as a performer. After kidnapping a showbiz dog in a fit of jealous rage, “Madeleine” turns to an apology expert (Anthony Perpuse) to help her rehab her image. The first half of the play delves into this initial concept, allowing Brown some hilarious moments of defiance and incredulity and establishing Perpuse’s character as an intriguing oddball marketing a niche service at a truly desperate market. A great first half. The second half goes off the rails into wacky mythology and loses all sense of character consistency. If Brown had kept it simple, she had a really good thing going.

Three Dates and a Flooded Basement (C)
I couldn’t tell if this was satire. It’s either a knowing exploration of toxic male culture or a “cool serial killer thriller” starring a “good guy” who says such definitely-not-at-all-problematic things like “it can be dangerous to hurt a man’s ego”. I really really really hope it’s satire. Either way, it’s a predictable and simplistic drama that boils pretty quickly down to “which of these two guys is gonna turn out to be the murderer, it’s clearly one of them”.

Graham Clark’s Not Here (F)
Look, Graham Clark is a great stand-up so obviously his routine featured in this show doesn’t deserve an F (I would probably go A-, maybe B+). But this pissed me off, so he’s getting an F. I get that touring a show is expensive and Clark would have to travel cross-country to perform in the Toronto Fringe. In which case, he shouldn’t have accepted a Toronto Fringe spot. There are people who really wanted that spot, lots of them, many of whom haven’t gotten the opportunity to perform here many times before like Clark has. If you want to record yourself performing a set so that audiences can see it at a later date, go for it. Put that shit online and I will watch it on a Tuesday afternoon alone in my living room where it won’t bother me so much that your delivery pace is conflicting with audience reaction timing. But the Fringe Festival is a live performance festival. It’s a theatre festival. For theatre. The only element of this show that can at all be called theatre is the well-timed hand gestures executed by the masked, uncredited “surrogate” wearing a Clark-filled iPad on his head. If Clark were performing live via Skype in spontaneous coordination with the surrogate, I still wouldn’t love it, but at least that could be called live performance (actually, if the surrogate were properly credited as a co-performer, that might be a fairly interesting multi-disciplinary piece). But this is just a recorded special with no production value. It’s exalted Vimeo material. It’s just lazy. What it definitely isn’t is theatre. A bad grade from me is a D, that means your play was pretty terrible. But Graham Clark gets an F, an actual failing grade, because he didn’t even turn in the damn assignment!