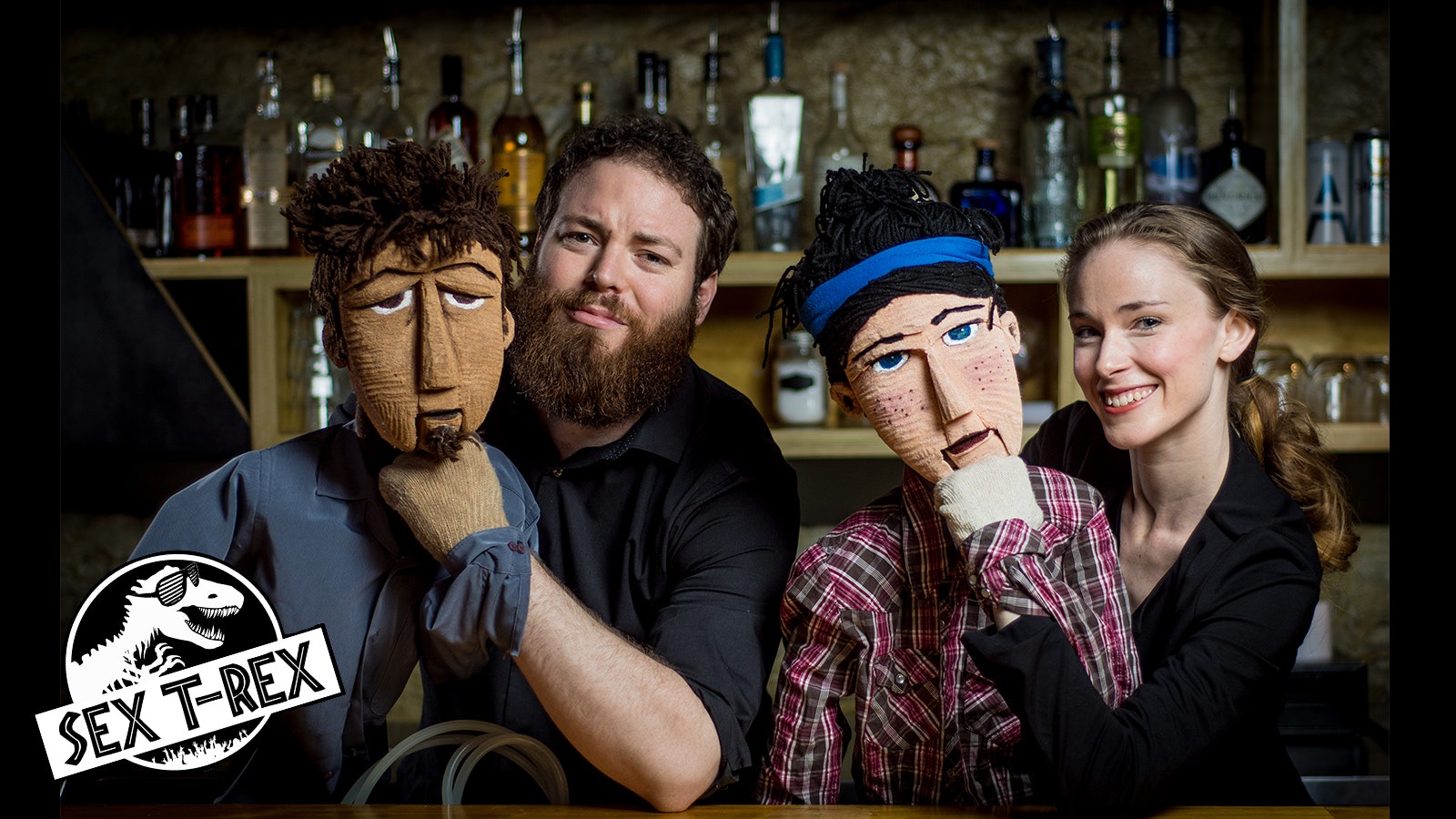 Bendy Sign Tavern (A-)
This site-specific puppet rom-com from Fringe favourites Sex T-Rex is a lovely departure from their usual action/adventure fare and a great showcase for their MVP Kaitlin Morrow whose puppetry skills won her our Honorary MyTheatre Award for 2016. The company specializes in genre parody and it’s clear that they neither love nor understand romantic comedies (their structure or their appeal) the way they do westerns and fantasy, but the addition of a few (absolutely delightful) musical numbers and Conor Bradbury’s charmingly downtrodden performance as the good ole “guy in love with his best friend” make it work. Around the middle, this “something rather different” experiment slips back into the Sex T-Rex comfort zone as people start going on little quests and encountering monsters but there’s a reason that stuff is their comfort zone- it’s what they’re best at. Different though it may be, Bendy Sign Tavern is still very much a Sex T-Rex show, so it’s quick, it’s fun, it’s more professionally executed than most things at Fringe, and it’s packed with creativity and cleverness (that “woke bros” bit is pure joy). For me, though, all the best moments are when the company is able to show that they can do more than they always do- Julian Frid’s melancholy ballad “Fly on the Wall” being the perfect example. Everyone in the cast is a pretty good singer on the adjusted scale of people you didn’t know could sing (pianist/composer Elliott Loran is a great singer on any scale) and it’s cool to see them stretch those muscles. It’s also never a bad idea to let Kaitlin Morrow make some puppets.

Special Constables (B+)
A half-recast remount of Circlesnake Productions’ 2013 collective creation, Special Constables is well conceived but under-rehearsed, which means that the opening performance I attended really deserved a B- but, by the end of the run, they’ll probably be at an A, so I split the difference. Pitched as a shamelessly goofy parody wherein powerless TTC cops investigate a metropass theft conspiracy with the intensity of an episode of The Wire, there’s promising dramatic irony in the concept as long as everyone is Kima; these characters need to take this seriously for the comedy to work and McNulty and Bunk don’t give enough fucks. The script meanders a bit but is generally well constructed and the bold bare-stage theatrics are fondly Sex T-Rex-esque (three of that troupe’s members are on this team as well). Everything about Special Constables suggests that it works brilliantly when it’s working but, as of their first performance, the pace isn’t up to speed, the mime is often imprecise, and line flubs are still a major issue. Nigel Downer, in particular, appears to be trying so hard to remember his lines that he doesn’t do much at all with a potentially very fun villain character. New cast member Chloe Sullivan was the most on-point out of the gate with sharp physicality and an intriguingly layered take on a scrappy henchman role originally written for a male performer (Chris Wilson, who reprises half of his original two-character track as a delightfully dumb bro). The company has made a point of adding some diversity and more female performers in their recasting, a smart move that adds an intriguing dynamic to the now-all-female henchperson team, though some of the lines directed at the the villain could maybe use some reconsideration now that he’s not a white dude. On a less consequential note, the transitions are in desperate need of some tunes. Special Constables was kind of stressful at the opening performance- precarious is probably the best word- but I’m confident in promising that, when you see it, it’ll just be fun.

Not Enough (B-)
Megan Phillips’ solo show about her experience on a 10-day meditation retreat makes clever use of sound recording to externalize the voice in her head. At times the din of her self-doubt is so overwhelming that it drowns her out completely. These moments are frustrating but are intriguingly contrasted with the play’s most compelling bits- when Phillips drops the gimmicks and impressions and psychobabble and just plays a short scene as herself living her life. In Not Enough, Phillips and director TJ Dawe spend so much time making sure that we understand that Phillips worries that she’s “not enough” that we ultimately don’t get to know her all that well. She’s always telling us how she feels but she only starts really connecting when she lets us intuit those feelings for ourselves.

Scat (C+)
Too much of this site-specific show’s 45-minute runtime is spent on transitions and everything from the pacing to the performances could be shored up to a much more professional standard (hence the low-ish grade) but the idea behind Scat is really strong- an immersive exploration of gender roles as examined through various events that happen in men’s, women’s and gender-neutral bathrooms. The audience follows one of three performers through each scene (the first is Ancient Rome, the last is a contemporary club scene, in between is an abbreviation of centuries), rotating leaders to hear snippets of the male, female and gender-neutral perspective through history. The groups are passed off between performers by way of a scarf we were told to follow that corresponds with the colour of a button we picked up at the box office, creating three different tracks primed for repeat visits. As the performers settle into their run, the technical flaws of this early performance will likely ease at least a little and the strong ideas will remain clear.

All Things Need Saying (D)
Clunkily written, awkwardly directed (with plenty of extra-long blackouts for no reason, of course) and performed with terrible timing and little nuance, this simplistic family drama is grating at best, funny at worst. The shoddily constructed and overly literal set screamed community theatre even before the door got stuck and actors started exiting through the window. Maybe with a killer cast there may have been redeemable moments in the story but it’s impossible to tell.