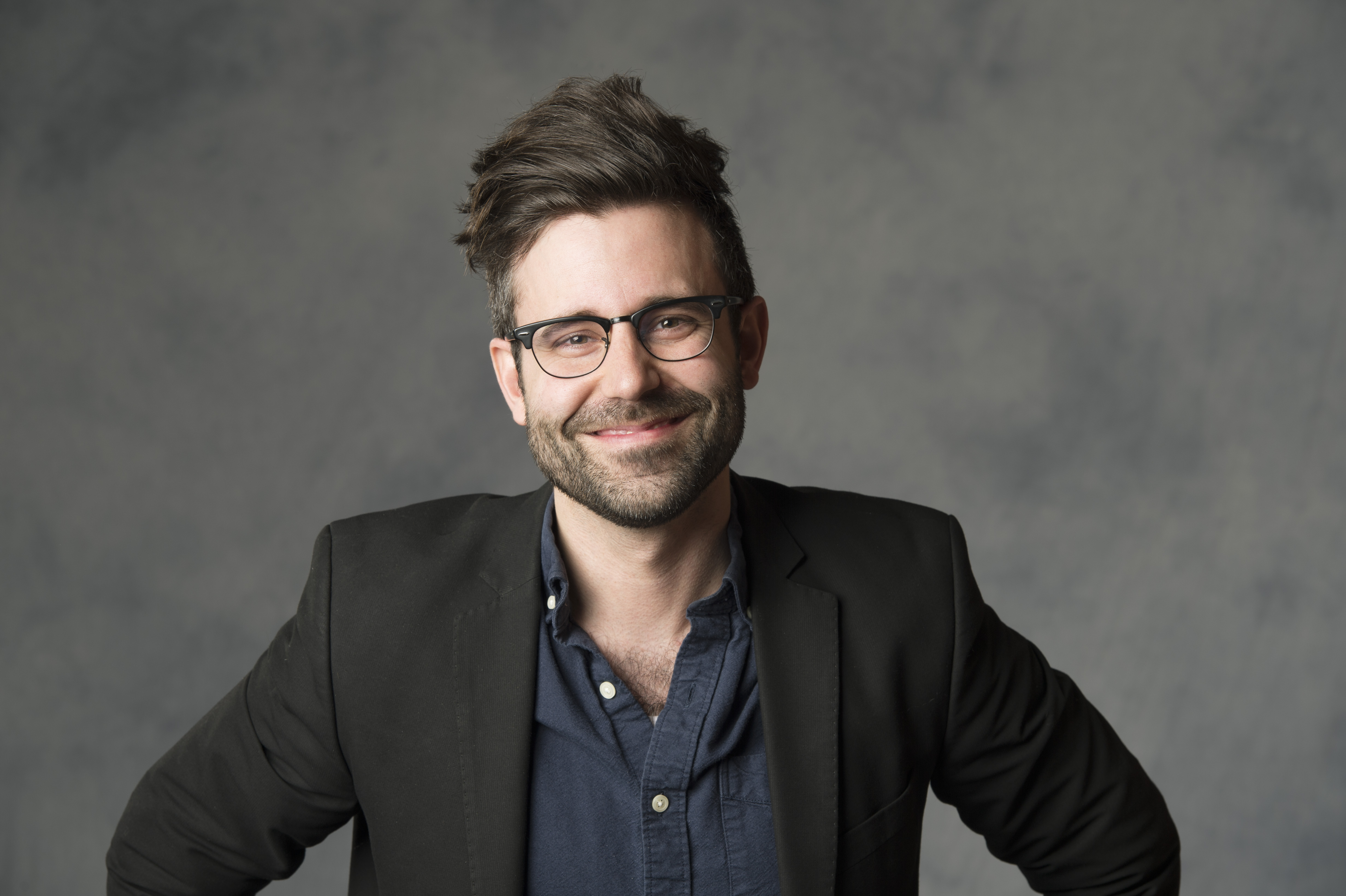 The endlessly engaging James Smith is a rare triple nominee this year. As the composer and lyricist of the Storefront/Soulpepper musical, he gets a heap of the credit for Chasse-Galerie‘s Outstanding Production nod in addition to his role in the Outstanding Ensemble of that show. He’s also nominated for his Outstanding Solo Performance at SummerWorks last summer, tuning pianos and telling his family’s story about mental health struggles in the stirring site-specific piece Lessons in Temperament.

Do you remember your first experience with theatre?
Oh yes. I saw Anne of Green Gables in Prince Edward Island when I was really young…maybe seven, and I fell head over heels for Anne Shirley. Not the actress playing her, but the character. She was my first major crush. I decided in that moment that I wanted to be Gilbert Blythe when I grew up – not play him in the show, but actually be him. That didn’t quite happen, but I did have the pleasure of playing first keyboard in that orchestra a few years ago, which felt close enough.

What writers and musicians have always inspired you?
Too many to put down here, so I’ll just focus on a few of the really early ones that got me started: my friends Bram Gielen and Angus Ryer, who I played music with constantly growing up (they taught me more than anyone); Celine Dion (my mom had all of her cassettes and I’d steal them when I was a kid and listen to them on the school bus on my Walkman), The Beach Boys (my first ever cassette tape), Stephen Sondheim, Bach, Mozart, Beethoven, Ella Fitzgerald, my childhood piano teacher Sheryl Mayhew. I could really go on forever, but I won’t.

What was the first piece of music you ever wrote?
I think the first one was in grade nine. It was for a history report on Ancient Egypt, and it had a call and response section about the Gods.

Lessons in Temperament is a very confessional solo show. What made you want to tell that story?
At some point as an adult it occurred to me that I have a particularly unique perspective on mental illness, because of my experiences growing up with my (amazing) brothers. There isn’t a ton of theatre offered from that perspective, so it seemed worth sharing.

How did you come up with the concept of tuning a piano while you told the story?
I spent a pretty significant amount of time learning to tune pianos a few years ago, and was fascinated by the science behind it. A piano can never be perfectly tuned; it’s impossible. So as a piano tuner, you’re constantly struggling to keep things in balance, to find an even, unnoticeable spread of dissatisfaction. You can’t give too much to one area of the piano, for fear of disrupting another area. You’re always striving for an unachievable perfection. It struck me as a good metaphor for life and growing up: keeping things in balance, as well as you can, even though it’s an endless and impossible task. That task struck me as a useful framing device for speaking about my life.

What have been some of the most interesting reactions you’ve heard to that piece?
The reactions have been beautiful. I’ve been very moved by some emails and voicemails that I’ve received from friends/acquaintances/strangers who saw the show and decided to reach out to me. Some people have told me that they’ve had similar experiences growing up, and it was refreshing to see their experience spoken about in such a casual and normalized way. My favourite questions I keep getting asked are: “can you come do the show at my house?” and “when you’re tuning a piano alone, with no audience, do you do the show?”

How did you get involved with Chasse-Galerie?
I was visiting people out in Stratford a couple years ago, and Tyrone Savage yelled at me from a patio while I was walking by about this idea he had for a French Canadian canoe musical. I kind of laughed at him and forgot about it, but he invited me over for breakfast not too long after that and made the full pitch. He told me about the legend of Chasse-Galerie and his vision for the show, and asked me to write the music and lyrics. I loved the idea, and I had a few months to kill, so I thought ‘why not?’.

What were some of the ways you incorporated the Quebec setting into the score?
There are a lot of ways to answer this, but I’ll just focus on a couple. First of all, I started listening to a ton of Quebecois music. Folk music, mainly, but also a lot of pop music, Quebec Chansons – new and old, and tons of fiddle music. I let all of that seep into my head as I was writing, plus I read every version of the original tale that I could find. From there, I really let the story and the characters inform the feel of the lyrics. I didn’t strictly tie myself to any particular forms, but I made sure everything I wrote came from a part of me that was inspired by the story itself and the music of that province.

You were added to the cast for the Soulpepper run. Tell us about playing Francois and working with Outstanding Supporting Actress nominee Shaina Silver-Baird.
Playing Francois was obscenely fun and very scary up until the day of our first audience (we all had a collective sigh of relief that night). I had a lot on my plate as I was the musical director and composer as well. I wasn’t sleeping much during rehearsals because Tyrone and I were doing tons of rewrites at night, so in rehearsals I’d be kind of surprised when I had to get up and start acting. But, ultimately, I think that is what really helped me find Francois as a character. He turned into this very aloof, unassuming, awkward guy, which made for a very satisfying meet/cute with the amazing Shaina Silver-Baird. Working with her was a complete dream. She is an amazing person and such a generous acting partner. We got so comfortable working together that our scenes were always a bit different night after night, (we’d kiss at different parts of the scene, change up a line or two) but it always flowed very smoothly. They we’d hang out backstage together and laugh at our hilarious friends killing it onstage.

How did the show change through the development and in the transfer to a bigger theatre?
I’d say the soul of the show remained intact, but there were pretty significant changes around it. At Storefront, we were writing up until the day of our first preview, so there was this ‘lightening-in-a-bottle’ energy to it. And so much of the show at Storefront was the orientation of the space, and the crazy/nervous/vibrating energy the cast was giving off because of how loose everything was, and how close we were to the audience. We knew that it was important to hold onto that vibe at Soulpepper, but that we’d need a more solid show to hold up in that kind of space. The most drastic changes were the addition of several songs that really helped move the plot along, and a completely different ending. At Storefront, we really wanted to have our four main women make a journey into Hell, but we just ran out of time. At Soulpepper, we got them there, and it made the stakes of the show way higher.

Do you have a favourite moment or song in the production?
This is tough. I think I’ll have to go with the fiddle battle. There were nights when audience members were standing up and screaming their heads off cheering for Toba. I loved that. I love when an audience feels the freedom to do something like that. It felt like we were at a hockey game or something.

Where would you like to see Chasse-Galerie go from here?
I’d love to take it all over the country someday.

You also worked on Our Town at the Shaw Festival this year. Tell us about that production.
That was such a pleasure to work on. Molly Smith, who I met while working on My Fair Lady at Shaw in 2011, is one of my favourite directors to work with. She had assembled such a beautiful design team that I found myself constantly in awe during the process. I decided early on that I’d like to write music for string quartet for the show, and she loved that idea. From there, it was smooth sailing. I’d send her demos, she’d give me feedback, and we’d go back and forth until we had the right sound for the show. Then I got to record all of my music with a beautiful string quartet in Toronto. Plus, Molly had a very ambitious vision for the sound design of the show: she wanted the actors all miming props throughout the show. So I was timing things like cutlery and door slams and bacon frying and taps turning on and off to small gestures that the actors were doing. All in, it was over 300 sound cues, and the most fun I’ve ever had as a composer/sound designer.

What are you working on now/next?
Now I’m in the Soulpepper Academy as an actor/composer. We just finished an amazing unit studying Chekhov, and next up is Shakespeare, Commedia dell’arte, and Clown. Plus, Rosamund Small (an academy playwright) and I have been working on a one-act musical together, and it’s been very inspiring working with her.

Do you have anything you’d like to add?
Nah, I’ve talked too much. Thank you so much for these nominations. I can’t wait to let loose with all you beautiful folks at the ceremony.