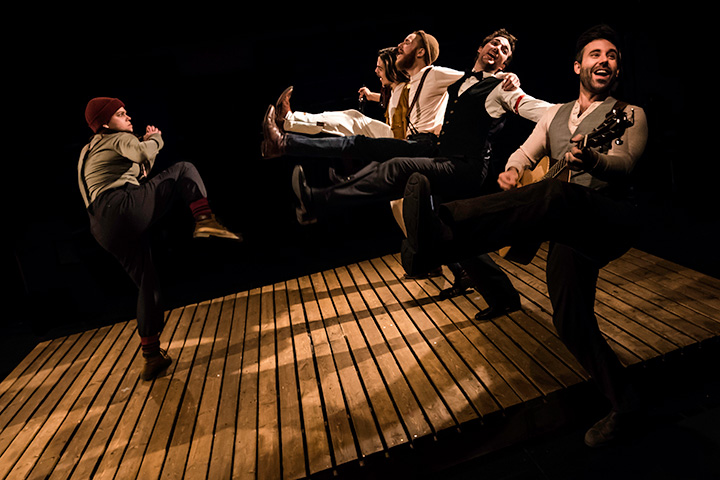 Original musicals are hard to develop and expensive to produce so you don’t see that many of them crop up in the Canadian theatre landscape. Chasse-Galerie (both its quality and its trajectory) is a reminder that it can be done and why it’s worth doing. James Smith’s music and lyrics are toe-tapping delights, many of which could stand on their own out of the show’s context, and the production itself- upgraded from its original Storefront home and let loose into Soulpepper’s Michael Young Theatre- is pure joy.

We begin with the not-so-cleverly named Lucy-Ferr, an enigmatic Ghazall Azarbad, narrating the folk tale of the Chasse-Galerie in a strong voice and fun hat. She transports us to a remote (really really remote) cabin in the Quebec woods where four coureuses de bois are lamenting that they can’t be in Montreal for New Years with their respected loved ones and the wonderful music of a bar called The Flying Canoe. Enter director/adapter/performer Tyrone Savage hamming it up as Damien, a devil in disguise who offers to fly the women to Montreal for the night under a few conditions you know they can never fulfill (the really problematic one is no swearing; Kat Letwin’s raucous Michelle always swears when she drinks, and she always drinks).

After convincing zealous Alex (Tess Benger, sweet and too naive) to give up her stash of crosses in the name of reuniting with her beloved Jaune (a charming Alicia Toner, doubling as a fiddle player in the band), the women take off in an enchanted canoe and find their way to Montreal with a little help from projection & puppet designer Daniel Briere. Once there, bookish Lea (Nicole Power) gets lost in a confusing and silly subplot with one of Damien’s competitors in his game for souls but voice-of-reason Toba (Shaina Silver-Baird) falls in love with the composer who ducks out from the piano just long enough to raise the stakes on what used to be just a night of debauchery (fun debauchery, though, propelled by whiskey-loving bad influence Michel-Paul played by a delightful Michael Cox). Smith and Silver-Baird sell the love story in a single charming scene, duetting as he teaches her to play the violin, and Silver-Baird’s warm, textured mezzo is the musical highlight of the entire show.

The book is imperfect (that Uriel subplot really has to go) and a few production elements are downright odd (why do the hell demons look like they’re wearing pyjamas?) but Chasse-Galerie is a thrilling addition to the Canadian musical theatre canon and this second production is as enjoyable as you could ever wish. The gigantic jump from Storefront to Soulpepper will hopefully be just the first leg of a limitless flight.