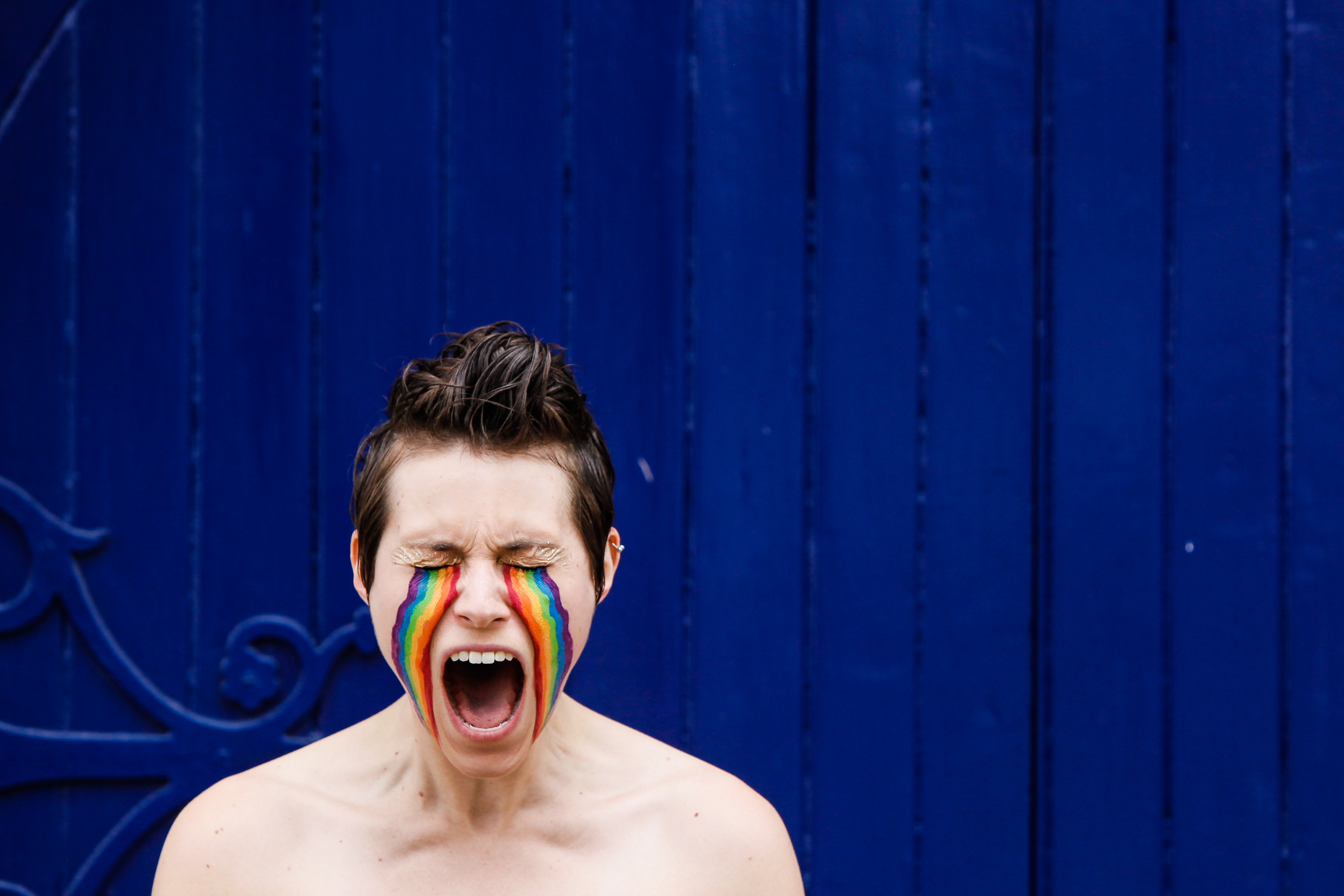 ‘Ze’: Queer As Fuck (B)
‘Ze’: Queer As Fuck is written and performed by Michelle Lunicke, originally from Washington, but who moved to Australia and New Zealand by way of British Columbia. The show is a staging of Lunicke’s coming out story, a long and windy process of realizing zir identity.

Of course, that’s no surprise given the title. For those who aren’t aware, ‘ze/zir’ are gender neutral pronouns much like ‘they/them’. As we walk into the solo room at the Tarragon, Lunicke is planking and wearing a jockey harness with a big purple dildo attached, warmly chatting to the audience, inviting us to sit closer. Ze begins the show by engaging us in an intense discussion of sexuality and shame (or shamelessness, as the case may be). It’s a bit of an intense beginning but after the first five minutes and some gender 101, Lunicke settles more into telling zir personal story. Ze starts out in a small Evangelical Christian community and abstinence-only education and winds through a series of revelations (but uh, definitely not of the religious variety). The story takes some interesting turns, where Lunicke isn’t just discovering things about zirself, but also about the people around zir, and the ways in which people exceed and subvert the labels they sometimes forcefully assert about their own identities. Though Lunicke seems to start with a rudimentary analysis of gender and sex (alluding to the mildly controversial genderbread person), it becomes clearer throughout the show that zir point is to show us not just the ways in which labels help us create our communities and ourselves, but the ways in which they are limited and, sometimes, oppressive. Ze is charming, hilarious, flirtatious, and not at all shy, and manages to portray an array of colourful characters from kinky Christians to a scene where ze is fulfilling their fantasy of penetrating a man for the first time – a scene that, due to zir comfort and commitment is not so much uncomfortable as it is mesmerizing and kind of playful and actually kind of incredibly satisfying to watch. A heads up that there is some serious audience participation, from kazoos, singing, play-acting, and even some er, kink (I am invited to spank zir at one point. Startled, I do so. It wasn’t good enough so I am invited to do it again. Okay, I could be really good at it, ze tells me. Whew.). This show is well worth checking out, but probably not for the faint of heart (or the prim of manner).

Get Yourself Home Skyler James (B-)
Jordan Tannahill’s play takes place in a Church basement. Private Skyler James is knocking on the washroom door, trying to get her lover to talk to her. They’ve had some kind of fight, though we’re not sure exactly what it’s about, only that the police are after her. To explain herself she launches into the story of how she realized she was a lesbian, joined the army, and then was bullied and oppressed and threatened by her fellow soldiers. Tannahill’s play won the 2014 Governor General’s Award, and while the narrative progresses in some interesting twists and turns, and the writing is good, I found myself wondering why this play was about a woman from Texas rather than a Canadian. (I thought the Tim Horton’s jokes were a bit cheesy but the audience seemed to love them.) Natasha Ramondino’s performance is good, though not as raw as it really should be. Her tone of voice and her attention don’t really convey that there is a real person behind the door she’s speaking through, her accent could use some work, and, most importantly, the emotional range of the character really needs to be carved out more robustly. Overall this production feels like it has a lot of potential but is still a (very watchable) work in progress.

Plus One (C+)
Gavin Williams and Lindsay Mullan are an improv duo who have been working together for at least a decade. When they got the call that they were in this year’s Fringe Festival, the bad news was that Mullan had just gotten another gig and wouldn’t be able to perform. The good news is that she’s organized a different improv partner for Williams for each performance. That person hides in the audience until Gavin reads their name from an envelope. (Never fear, Mullan has worked it out in advance, and Williams isn’t pulling a random audience member up there with him, which is what I thought at first.)

Williams calls up his partner for the night and they are given prompts by both Mullans’ notes and the audience from which they craft an hour long improv comedy show. The strength of the scenes on this particular night fluctuated somewhat, and Williams is definitely at his best when playing vulnerability rather than just for the laughs. The beginning of the show in particular was strong with Williams and his partner collaborating on creating the narrative and subverting audience expectations in both hilarious and heartwarming ways. Williams himself seems like one of the better improvisers I’ve seen in a while, and if improv is your thing, this show is definitely worth checking out!