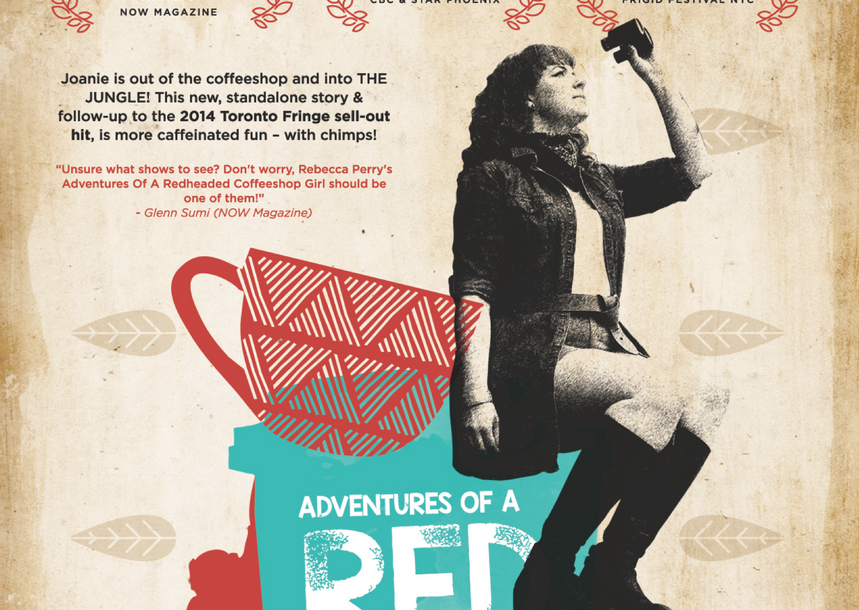 Adventures of a Redheaded Coffee Shop Girl (A-)
Adventures of a Redheaded Coffee Shop Girl is a follow-up to last year’s Confessions of a Redheaded Coffee Shop Girl, both written and performed by Rebecca Perry. I didn’t see Confessions last year, but I got the distinct sense it was a huge hit given how full of anticipation the audience was on opening night. This year, Perry’s fans can see her head out to the Jane Goodall Institute in Africa to pursue her dreams of becoming an anthropologist. She leaves behind Marco, her boyfriend, and heads to a camp in Africa that she will call her home for the next three months. There she encounters a myriad of characters, including a sweet Chimp named Fetch. She also runs into a host of challenges, from competitive camp-mates, heat-stroke, not to mention an angry female chimp who attacks Joanie in a fit of jealousy over Fetch. Perry is charming, and a good storyteller. Her characterization is good (though she might want to work on her Glaswegian accent before taking this production to Edinburgh) and her singing is terrific. I did wish that the songs were more obviously integrated into the story, but the music itself is sophisticated and well executed. The narrative wrapped itself up rather quickly, and the stakes of the choice she must make should have been clearer from the start for it to be a more satisfying conclusion. Definitely a fun one to catch, especially given the energy that the audience brings to the experience.

Deepest Darkest (B+)
As we walked into the Theatre Passe-Muraille mainspace, a sign urged us to write down a confession. We filed into the theatre, instructed to sit in the front and centre. On the stage was an old-school projector, and a wave of nostalgia came over me, reminding me what it was like to be in high school in the days before Power Point. When the play starts, we meet Erica, a high-school girl who ‘isn’t quite living up to her potential,’ according to her saccharine and patronizing guidance counsellor. In fact, that might be an understatement, as we see her swigging from a flask she hides in her desk, flirting with the audience, and telling us about everything except her deepest darkest secrets. This one-woman show, written and directed by Caitlin McCarthy, takes a while to gain momentum, but McCarthy’s characterization of a diverse cast of characters hooked my interest in the story. There were also elements of audience participation that worked well in the performance, though I wonder if that element is consistent throughout the run. Regardless, when it does work, such risks have high rewards as it creates intimacy between McCarthy and the audience that endears her to us despite her evasiveness. When she finally does reveal her secret, I found myself dissatisfied, hoping for a better explanation for Erica’s actions. It felt as though the real story still hadn’t quite been told.

Deadmouse: The Musical (B-)
Deadmouse: The Musical is about a Joel Zimmermouse – a talented young mouse who wants to make it as a house DJ in a human’s world. But prejudice and discrimination are working against him, and he encounters a number of setbacks on the path to success. There has been a lot of controversy in the news recently about the production due to a cease and desist order filed by Deadmau5. (Ultimately it got cleared up when the production added a disclaimer indicating that it’s a parody.) Instead of discussing this, though, I’d rather address how a production intent on dealing with issues of race, disability, and oppression could be so oblivious to its own glaring misogyny.

This script feels like it could have been written by 15 year-old boy. I didn’t think that this kind of writing was still possible given the influx of women-dominated shows and movies recently: Orange is the New Black, Mad Max: Fury Road, Orphan Black – just to name a few. But apparently Rafe Malach didn’t get the memo. The musical starts off fine, with Joel’s dream of his future success. Right from the start, the music – written by Rafe Malach and Adam Jesin – is sophisticated and catchy, and the choreography strong and punchy. Yet very quickly things got less fun for me. Joel’s best friend – David Gouda – has an entire number that consists of objectifying a woman whose online profile (on Plenty of Mice) interests him, joking that because she’s bisexual she must be into three-ways, and revelling in the fact that in her questions section she mentions she likes oral sex. This song is paired with hip and tongue thrusting, amplifying the lecherous lyrics. Sarah Horsman, who plays Cat, Joel’s romantic interest, rolls her eyes and makes faces during the number, but it’s not enough of a statement to really undermine Gouda. Later, we’re introduced to the woman Executive (apparently she doesn’t have a proper name) who heads up Bitch Records. She’s sassy, and Jewelle Black plays her with more depth than is written into the script. Yet the two women behind her holding ‘Bitch Records’ clipboards were there as mere decoration. Gouda ends up with the Executive at the end of the show, who collars and dominates him – because apparently the only way a woman can be strong in this play is by being a dominatrix. This wasn’t an ironic portrayal, or an attempt to balance out Gouda’s jejune behaviour. This was ignorance and puerile humour.

In fact, none of the female characters were robust, while the rape and sex jokes abounded. I found myself wondering what the point of the Gouda character even is. Is he there to support Joel? The character of Cat can provide that, so why not get rid of him altogether and fill out Cat’s character more? That would strengthen the story by raising the stakes of their budding romance. Or, if keeping sexism in the play is important – and it could work really well, given the other themes in the show – then at least make sure to balance it out with other voices. Give Cat enough material to expose his sexism for what it is, or get some other character to put him in his place. Exploring this kind of immaturity and sexism is important, but it requires actually addressing it, which this show doesn’t do.

The cast is solid across the board: the dancing, singing, and acting all helped to redeem a floundering story. Dale Miller’s direction also does a lot for the production, adding nuance in character reactions and staging. There’s potential here, but Malach might want to consider bringing someone else on to help him with the writing. Regardless, the musical was a fun reminder of why feminism is still very, very necessary.