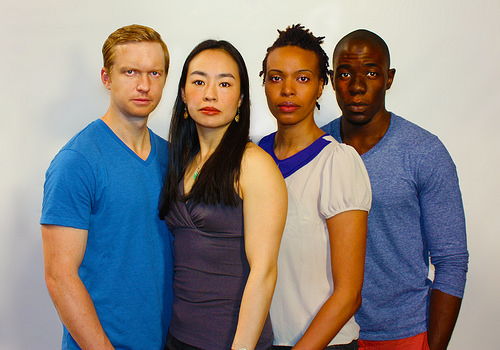 This month’s selections can only be described as tackling the smart and difficult topics left untouched by most of society. Too often, it is easier to ignore our problems and issues rather than facing them. These productions offer the touch discussions, from race to living life without regret to questioning the safety of our youth. While this month’s list may lack the variety of past months, it still reaches from the (free) staged reading to the fringe to the professional companies, from new works to revivals of favorite musicals, with enough Boston My Theatre favorites to remind us of the wealth of talent in Boston.

With school out for summer and imminent summer vacations, shouldn’t you make time to try the stunning Boston theatre? We’d love to hear from you: what shows did you see in June? What did you like? What productions got you laughing, crying, thinking, and talking? Who wow’d you with their performance? We’re so lucky to have theatre companies who approach theatre and art with an introspective lens and we at Boston My Theatre want to know what resonates with you, our readers and theatre patrons! Send us an email at brian@myentertainmentworld.ca or simply reply with a comment on this feature.

Gidion’s Knot
Written by Johnna Adams
Directed by Karen MacDonald
Bridge Repertory Theater of Boston
The Calderwood Pavilion at the Boston Center for the Arts
Deane Hall, 527 Tremont Street, Boston, MA 02116
About the Production
June 5 – 22, 2014
Bridge Rep made a strong mark on the Boston theatre scene this year with its first full season, and it’s been an exciting ride. While it’s had its ups and downs, the company has ensured that it is a formidable and impressive company of talent. They finish their first season with Gidion’s Knot, a flawed though heralded play, by Johnna Adams. The play centers around a parent-teacher conference, but quickly descends into accusations and struggles to understand the horror of an unspeakable tragedy. Beneath the layers of secrets, both women find the truth behind the backstory of the young child’s death. Described as exhilarating, devastating, and “a perfect piece of theatre,” it’s no question that this play needs to make my June Must See. As we continue to grapple with freedom of expression and the safety of our children, important theatre like Gidion’s Knot reminds us that theatre is an essential vehicle for dialogue and change. Additionally, with Karen MacDonald at the helm as Director, and Olivia D’Ambrosio returning and joined by Deb Martin, the perfect classroom of talent may be assembled for this play.

Smart People
Written by Lydia R. Diamond
Directed by Peter DuBois
Huntington Theatre Company
The Calderwood Pavilion at the Boston Center for the Arts
527 Tremont Street, Boston, MA 02116
About the Production
May 23 – June 29, 2014
The Huntington Playwriting Fellowship is an impressive and essential program for Boston theatre. Lydia R. Diamond is one of the Boston playwrights who we can’t lose to New York City or Chicago, and the Huntington Theatre Company offers the opportunities for these playwrights to flex their creative and artistic muscles. Few directors are as sharp and nuanced as Peter DuBois; his tenure as the Huntington Artistic Director explains the Huntington’s recent accolades and laurels. And it should be no surprise that Boston has a race problem. What Diamond constructs with DuBois help is a sharp and clever dialogue on the tricky topics of navigating intellectualism and racism, along with other controversial concepts, in this quick-witted comedy. While this play is hardly perfect (seriously, a conversation about race by who can only be described as participants in the middle to upper middle class?!), its attempt to dissect some of our preconceived notions in regards to race, and its connection to love and success is a profoundly interesting conceit. This play makes the Must See for its newness; Boston needs more well-crafted new plays, especially when they are cultivated from within our culture and our needs as a community. I encourage everyone to support the Huntington to continue such a program, and join me in the conversation regarding this play’s big ideas.

What Lips My Lips Have Kissed
Written by Paula Plum
Union Church in Waban
14 Collins Road, Newton, MA 02468
About the Production
June 6, 2014
I admit to not knowing much about this play, except that it has had prior staged readings in Boston. Paula Plum is a Boston legend for her acting and theatrical success, and I applaud her ambition to tackle playwriting, especially on such a passionate individual. Edna St. Vincent Millay is (or should be) a staple in English classrooms around the country for her fierce and lyrical poetry. The title is taken from one of her more haunting sonnets, ending “I only know that summer sang in me/ A little while, that in me sings no more.” An unconventional childhood lead to an unconventional adulthood. With a thirst and lust for a life unlived, and a search for life and love, Edna St. Vincent Millay makes for profoundly interesting theatre. With a powerful cast of women, including Linda Goetz, June Kfoury, and Paige Clark Perkinson, it should be no surprise why this play is a Must See. And did I mention that it’s FREE?

South Pacific
Book by Oscar Hammerstein II and Joshua Logan, Music by Richard Rodgers, Lyrics by Oscar Hammerstein II
Adapted from James A. Michener’s Tales of the South Pacific
Directed by David Hugo
Music directed by Daniel Rodriguez
Choreographed by Rachel Bertone
Reagle Music Theatre of Greater Boston
617 Lexington Ave., Waltham, MA 02452
About the Production
June 12 – 22, 2014
We’ve returned to our summer stock season. Reagle Music Theatre of Greater Boston impressed last summer for its highly-acclaimed, thoroughly-enjoyable production of Les Misérables. They return this season with a very different line-up, but the all-stars, Director David Hugo, Musical Director Daniel Rodriguez, and Choreographer Rachel Bertone are serving up some more of their epic talent. I have been campaigning for a South Pacific revival in Boston; I want to see an edgy, gritty, and deeply moving production of this oft-overlooked musical. While Broadway saw critical success with the musical revival starring Kelli O’Hara as Nellie and Paulo Szot as Emile, I found the musical lacked the twenty-first century reflection on this timely piece. With racism, feminism, and our problems with acceptance in the military continuing to plague our society, South Pacific shines beyond a mere period piece, but serves as a reminder for, perhaps, how little we have accomplished. While I could write pages on my respect for the musical as one of Rodgers and Hammerstein’s strongest piece (my high school was on a bit of an R&H kick during my four-year tenure so between community and high school theatre, I’ve worked my way through most of the canon), I will simply leave the story-telling magic to Reagle Music Theatre. Katie Clark plays Nellie Forbush, and she impressed in Company with her quirky and dynamic mannerisms and character choices; I expect her leading lady to have both impressive vocals but also the raw energy of a Southern nurse in the South Pacific caught between the conflict of a love of a lifetime and the deeply-held beliefs for which we can’t quite shake.