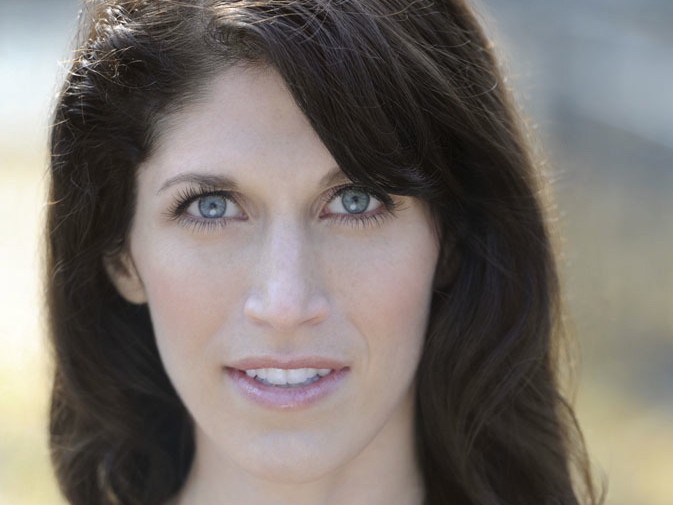 Before we announce the winners of the 2013 Boston My Theatre Awards, we’re proud to present our annual Nominee Interview Series.

Boston performer and teacher Olivia D’Ambrosio was nominated for Best Actress in a Play for her work in Bridge Repertory Theater of Boston’s 2013 production of The Libertine. As she helps organize and lead the new troupe, Olivia reflects on some of the joys and challenges of working as the Producing Artistic Director and as a performer for this Boston theatre company.

Olivia, thank you so much for taking the time to meet with me. Your performance in The Libertine was so moving. I can tell that you have a lot of love and respect for the stage and your work. When did you first fall in love with theatre?
I was a latecomer, to be honest. I didn’t really start acting until college, and my love for it has really grown as I’ve learned more about it.

Wow, I would never know that you didn’t start until college! I guess you caught right up! Despite being a “newcomer,” do you have any favorite and/or memorable roles?
Playing Elizabeth Barry in The Libertine is right up there. I also loved playing Girleen in The Lonesome West, by Martin McDonagh, in graduate school, as well as Abigail in The Crucible at Trinity Rep Company.

Sounds like you have some great background and training. Speaking of training, I am a firm believer in accepting, and tackling, roles that stretch us as actors and people. What roles or performances stretched your performing skills?
Gosh, they all do. The Libertine was particularly demanding, given the heightened text and the sheer amount of language.

Speaking of performing skills, do you have any special ones?
Hmm… I can juggle a little bit. And I know a few party tricks, thanks to my yoga practice. Standing on my head and such. J

I hope that you’ve pulled out those abilities at auditions. That would certainly keep me entertained as a casting director. Speaking of auditions, do you like auditioning? Tell us about your worst audition. How do you feel before, after, during them?
I really don’t mind auditioning, to be honest. It’s a chance to act in front of a live audience! I had one audition where I went up on a line, but honestly, I wasn’t too freaked out by it. I’ve really mellowed about auditioning since I’ve started watching so many auditions for Bridge Rep. They aren’t performances. I’ve learned there’s a very visible and tangible difference between a nervous mistake and sheer lack of preparedness. The former is very much forgivable!

What’s your biggest struggle as a performer? What are you continuing to improve and refine?
I still hear my teachers’ voices in my head, a little bit. I don’t always trust that I have my technique deep within me and can just focus on making creative interpretive choices about the character, and then acting them.

Talk to us about your process for The Libertine. How much did you relate with your character? How did you prepare for the role?
I love Elizabeth Barry!  I related to her very much – a young woman in the theatre determined to make her own way on her own terms. A big part of my process actually involved incorporating the dialect into my performance in an authentic way, so it really sounded like my voice.

What made The Libertine special for you? Did you expect the production to be nominated for so many awards?
Working with Joseph Rodriguez, Eric Tucker, and the crew from Playhouse Creatures is one of my most treasured experiences as a theatre artist. The collaboration was a huge success, and I am eternally grateful to Joseph for including me in it. Also, being on the Wimberly Stage and using it in such a creative way – I was proud to be a part of that. In terms of the nominations, I didn’t really know how this piece would land. I thought a lot of people would love it, and a lot would hate it… and I think that’s what happened! Fortunately, many critics were in the former category.

Well, I think my glowing review solidified that I was in the former camp. I know that the cast was a collaboration of sorts between New York and Boston actors. How did that evolve? How did that work for you, for the company?
Joseph and I met many years ago in New York, and it was really his idea to reimagine the show and share it with a Boston audience. Many of his colleagues at Playhouse Creatures have roots in Boston, so for a few of them it was a homecoming of sorts. Working with the Creatures also helped the little Bridge grow a great deal in terms of visibility and production competency. I am so grateful, and I hope they will be back for more in the future.

I would love to see more collaborations with NYC companies. It was very smart of you to recognize that Bridge [Repertory Theater of Boston] needed the visibility and production competency from a more mature company. Can you tell us more about Bridge? Why did it form? What is its mission? What role do you serve, and what are you doing in this role?
Several colleagues and I formed Bridge Rep in order to have the freedom to create work through our own aesthetic, and to make an impact on our city’s [Boston] industry that is in- line with our values as artists and people. Our mission is to position live theatre not as an end unto itself, but rather as a means of connection. Specifically, we conduct all aspects of the organization with the aim to connect actors to audiences, artists to artists, and the theatre to our city. I, personally, have always wanted to lead an organization. To that end, I galvanized the troops and I am the Producing Artistic Director, but we largely function as a team, and our infrastructure is improving all of the time. Because we are small, have limited resources, and are learning as we grow, I’ve worn all sorts of hats – everything from working with Actors’ Equity to serving as props mistress to designing our website. Our roles are growing more defined now, and more streamlined. There’s still so much to learn – it’s really difficult, to be honest! I have so much respect now for anyone who has started or run his or her own small business for years and years. It is a ton of work, but, in the end, that work translates into creative freedom, and that is priceless.

It seems like you really know how Bridge Rep fits into the Greater Boston theatre scene. What changes do you see in the Boston theatre scene? How do you see Bridge Rep responding to these changes?
I’ve lived here only a couple of years, so I’m not sure I have the long-term perspective to answer this question well. I’ll be interested to see how leadership turns over and evolves in the next 10 – 15 years or so. As far as Bridge Rep is concerned, I’d like us to continue carving out a unique niche. I’d like us to be functioning and recognized as a professional theatre, but I’d like to maintain a very intimate, homegrown quality, where actors drive the story and deliver an immediate experience for a small group of people. I don’t want to grow into a 700-seat house. I’d like to stay at 50 – 75 seats, but run our shows for much longer. I’d like to create as many Equity contracts as we can, and also foster young actors with great professional opportunities and training programs.

Those sound like great goals, and I hope you can attain (and surpass) them in the next few years! What about your goals as a performer? As a member of Bridge Rep? As a person?
My goal as a performer is to have the courage to trust my interpretation of a text, and to be a conduit for the audience member to have his or her own experience. At Bridge Rep, my goals include being a good leader and colleague for my associates and Board of Directors, and to be an engaged member of the larger Boston theatre scene. As a person, I want to have a balanced life: I want to even-out the amount of time I spend working and the amount of time I spend with friends and family, or pursuing other interests that inform my development. I want to have friends of all ages. I want to teach others, and also seek out mentorship so that I continue to learn myself. More tangible goals? I want to see all 50 states (only 6 to go!), and I want to be able to pike into a handstand (lots of yoga for that one).

I’m curious to know which six states are left! Hopefully, Hawaii! Can you tell us about any upcoming projects for you?
I am honored to be performing at New Rep in March, in Tongue of a Bird by Ellen McLaughlin. I will also be in the final show of Bridge Rep’s first season, which we’ll be announcing very soon!

Too funny! Do you know Ilyse Robbins? Now I definitely need to see Tongue of a Bird. I can’t wait for the announcement of your final show. It sounds like you keep very, very busy. What do you do in your spare time? Do any of these activities inform you as an actor and artist?
With Bridge Rep still very much in its delicate start up phase, the honest truth is that I spend the majority of my time either working on Bridge Rep, or teaching, which is how I make my full-time living. I teach actors at the Brown/Trinity Rep MFA Program. I also teach acting at MIT, of all places, which is hugely fulfilling. Finally, I teach yoga at a variety of public locations throughout Boston. I’ve started seeing a personal trainer a couple of times a week for kick boxing – I love that! And my current guilty pleasure is an episode of American Horror Story at the end of a long day – I have to cover my eyes a lot, but it’s fun!

Wow, I’ll have to contact you if I ever need acting lessons (yes, yes, I do). I’m sure you’d be a great monologue or scene coach! Is there anything else you would like to share with our readers?
I am tremendously grateful to the donors and audience members who have come out to support Bridge Rep. It is my fervent hope that we are holding up our end of the deal by creating moving experiences for our audience, making an impression that lasts well beyond the end of a given show. I also want to reiterate my enormous gratitude for my colleagues and Board of Directors for helping Bridge Rep grow. Special shout out here, too, to Laura Sullivan or DRIVE PR + Consulting for working so generously with us. Finally, I want to impress upon readers that live theatre – whether it’s produced by Bridge Rep or not – depends hugely on the participation of the public. We work to create a very special experience for the community, and in exchange, the community has to participate! Tweet about your favorite organizations, make a gift, invite friends to a show – these things matter! The accumulation of all actions, large or small, made by one individual at a time, will allow the theatre to continue to exist. Take part, friends!