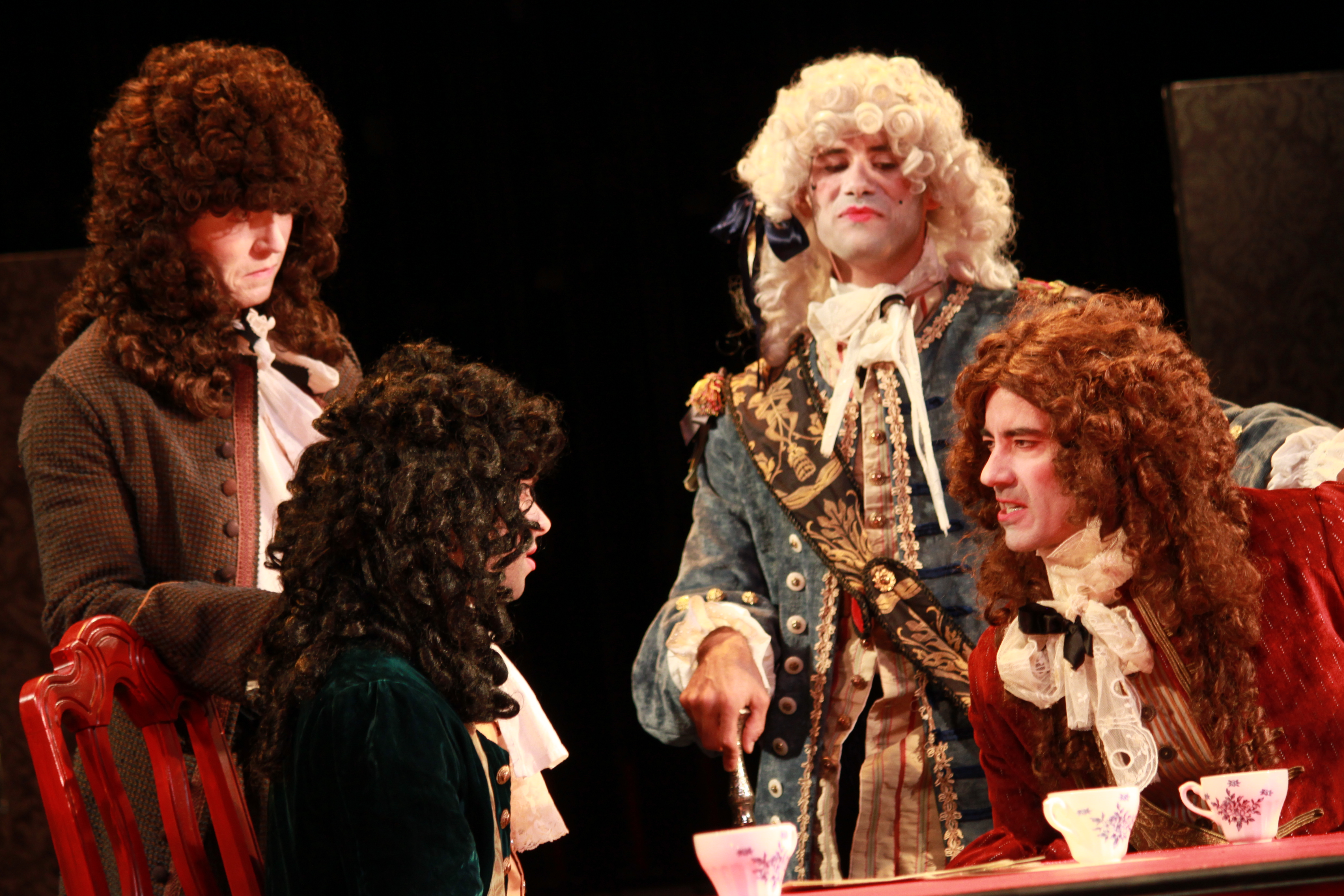 The Libertine Introduces a New Boston Company as Top Shelf

I didn’t know what to expect when I agreed to review Bridge Repertory Theater of Boston’s The Libertine. I rarely review new companies, after making that mistake much earlier in my reviewing career; now, I wait until they have established themselves for a season or at least I know a few reputable actors. Here, I knew neither company nor actors. I didn’t even know the show! Oh how I was surprised and amazed at what Boston theatre could be!

Directed by Eric Tucker, The Libertine by Stephen Jeffreys is a partnership between Bridge Repertory Theatre of Boston and NYC’s Playhouse Creatures Theatre Company. “You will not like me. No, I say you will not,” taunts our leading man, the Earl of Rochester, John Wilmot, played with spirited fun and passion by Joseph W. Rodriguez. Wrong, John, wrong. I love you and your hilarious and talented castmates. You see, this play mixes some of my favorite things: comedy of sexual manners (no, this is not a production for the prude or proper); intellectual arguments on life, love, and everything in between; and riotous moments, perfectly acted despite the constraints of costumes and period-appropriate acting. Tucker’s The Libertine balances the fine line between poignantly truthful and remarkably funny and switches between these dichotomies on the width of a dime. Rodriguez does a commendable job leading the cast, sparking the perfect amount of pity, understanding, and disgust from the audience. Yes, the character is rather detestable, even pitiable towards the end, but Rodriguez is just so good. Even while the audience is fatigued from a thrilling two-and-a-half-hour performance, Rodriguez barely breaks a sweat; he is always in command, both physically and emotionally, and he relishes in his profundity, cleverness, and fun.

Equally impressive was Olivia D’Ambrosio as Lizzie Barry, a truthful actress and Rochester’s lover. D’Ambrosio manages to captivate the audience with the flick of her mouth, and her voice is like warm chocolate, flowing and thick and rich. Each word, no, each syllable is savored by this musical actress. You can quickly understand why Rochester falls in love with her; D’Ambrosio’s Lizzie is one part charm, two parts good looks, and all parts engaging. While her ending dialogue dragged for me, I think I was more exhausted with the playwright than with D’Ambrosio. Of course, we couldn’t call the play The Libertine without some whores, and Megan O’Leary as Jane takes the cake (and eats it too!). Her Jane is crafty, naïve, and jolly good fun all with her perfectly-timed dialogue and quips. While I found the character grating, O’Leary captures the right moments and holds us up a Jane with more than meets the eye.

The crowned jewel, however, is Rochester’s “witty entourage.” Billy Downs, played by the mesmerizing Troy Barboza (more of him, please!), Etherege, played by the biting and cautious Brooks Reeves, and Sackville, played with delight by Daniel Duque-Estrada, create the perfect band of men to complement Rochester (and, likewise, Rodriquez). Every one of their scenes is a gem to watch, especially the opening (it’s truly a masterpiece in acting and directing) and the clock scene (during which I could not stop laughing). These actors play excellently off each other’s humor, personality, and relationships to their collective advantage. Barboza particularly impresses as an actor well beyond his years, and he always manages to create an aura of mystery about his character; I felt like his character deserved his own play and story, given Barboza’s commitment to creating a full and rich character.

The Ensemble is wonderfully performed by a trio of “Ladies of London,” including Margarita Martinez, Lauren Eicher, and the captivating Aubin Wise. These three ladies transition scenes with their beautiful singing, and create an amazing opening to Act II. I don’t wan to give away any spoilers, but, again, if you’re prude or taking your grandma, you might want to try discussing your sexual history first. Sarah Koestner’s Lady Malet hit the right notes for me, but not enough of them; I can’t figure out if it’s the character or the actress. Likewise, Richard Wayne’s King Charles II annoyed me most of the time because he seemed to lack any solid character choices, but his final scenes, especially in the tower with Rochester were wonderfully executed and showed such strong, committed choices that I almost forgave him. Bit roles were filled out by the cast with Huysmans, a painter, played also by Brooks Reeves, being a delightful favorite.

Tucker, however, deserves some of the strongest accolades. His direction takes a questionable script (looking it up, it’s published by one of my least favorite publishing companies) and turns the play into a masterpiece of theatre. This production brings NYC theatre to Boston for affordable prices. Not only that, it takes chances, and succeeds. The actors excel with their variety of dialects and accents under the artful guidance of Dialect Coach Thom Jones. Tucker blends modern acting with Restoration comedy and form with a genius design and a keen eye to detail. He plunges the depths for all of the comedy and passion in this play. His actors deliver it. Even more impressive was the scenic design for which I have not seen anything so clever, successful, and enjoyable in Boston. The scenes flow seamlessly and seem to tell a story through the scene changes! With moving walls, they form numerous locations, from playhouses to country homes to tower chambers. His set accentuates each of the play’s moments and, despite its minimalism, it never limits the play’s progress. Finally, the costume design offers some of the most impressive array of colors, patterns, and designs which are historically accurate, aesthetically pleasing, and representative of each and every character; kudos to Costume Designer Angela Huff and Assistant Costumer Designer Susanne Miller.

Quite amazingly, I reviewed a mere Preview. The Libertine opened officially on September 7 and runs until September 22. See it, enjoy it, and discuss it amongst yourselves. Bridge Repertory Theater of Boston, I’ve got my eye on you now.