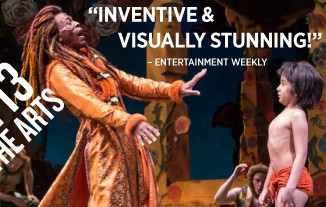 A new theatre season is upon us! I am very excited to start my third year as the Head of the My Entertainment World’s Boston Theatre Division. I am looking to expanding coverage this year with reviews of more productions than ever before, especially in new areas such as community theatre, opera, and staged readings. We have new reviewers starting with us, and we are expanding our My Theatre Awards coverage to include new categories!

My “Must See” list is a new series on My Theatre, a monthly list of shows to see in Boston. In each entry, I will list and highlight each of my most anticipated shows for the month and detail why I included each production in my list.

Without further ado, my “Must See” Boston Theatre – SEPTEMBER:

Huntington Theatre Company
The Jungle Book, adapted and directed by Mary Zimmerman
A Ravishing New Musical
From the stories of Rudyard Kipling
Avenue of the Arts/BU Theatre
Sept. 7 – Oct. 13, 2013
Mary Zimmerman made a profound impact on me when I was in her Arabian Nights in college. In 2011, I was lucky enough to review her Candide (2011 My Theatre Award Winner for Division II Best Production) at the Huntington Theatre Company. Mary Zimmerman (2011 My Theatre Award Nominee for Division II Best Director) is at the helm of this new musical and adaptation of the classic Rudyard Kipling stories. This production made a splash on the Chicago theatre scene at the Goodman Theatre. It’s no surprise that this production should be on everyone’s “Must See” list.

Lyric Stage Company
One Man, Two Guvnors, by Richard Bean, directed by Spiro Veloudos
New England Premiere
140 Clarendon St., Boston, MA
Sept. 6 – Oct. 12, 2013
Lyric Stage Company has rarely disappointed me. Since a particularly breathtaking 33 Variations, Lyric Stage Company has given me some wonderful nights of fun, insightful, and thrilling theatre. Their 2013-2014 Season may be their best yet! They begin with this Tony Award-winning new play which promises “more laughs than The Book of Mormon.” Frankly, that’s a high bar to set, but if any company can do it, Lyric has proven able to rise to any challenge. Finally, Mr. Veloudos is one of my must-see directors, and who promises to be a My Theatre Awards Nominee in the near future.

Note:  Unfortunately, due to an error in communication with Lyric’s media contact, the performance I saw of One Man, Two Guvnors was a Preview. As per their request, I thus am unable to publish my review of the production and therefore it will be removed from contention for the 2013 My Theatre Awards. Go see it for yourselves; we’d love to know what you think!

Bridge Repertory Theatre of Boston
The Libertine, by Stephen Jeffreys, directed by Eric Tucker
A Co-Production with Playhouse Creatures, NYC
Boston Premiere
Calderwood Pavilion at the Boston Center for the Arts
Sept. 5 – 22, 2013
I just finished seeing the Preview for this production, and all I can say is: Wow! This production packs a punch. With one of the strongest ensembles I’ve seen in Boston in the past year, and a story that will knock you off your feet with laughter and poignancy, this production offers something for everyone. Bridge Repertory Theatre of Boston is a new company, launching its first season with this challenging piece, but their artistic team is wise, mature, and extremely talented. They offer NYC theatre in Boston, which is a rare compliment of the professionalism for this new company.

The Footlight Club
August: Osage County, by Tracy Letts, directed by Frank Moffett
Elliot Hall in Jamaica Plain, MA
Sept. 13, 14, 20, 21, 27 & 28 at 8pm
I read this play over the summer because I wanted to see about all of the fuss (at least two reputable community theatres are tackling this behemoth of a production this season). This play is worth its weight in gold. Directed by a well-respected community theatre director (always on the ballot for local Eastern Massachusetts Community Theatre [EMACT] Awards), August: Osage County is not to be missed because of its ability to tackle the mundane with sincerity and passion. Each of the characters could steal the show, and together, the collective efforts could lead to an ensemble nod. Footlight Club impressed with Andrew Lippa’s Wild Party last season, earning a My Theatre Award Nomination for Division II’s Best Director for Chad Flahive’s work. I have wanted to see more productions at the Footlight Club ever since, and I can’t turn down this opportunity. As if I needed any other reason, I have worked with both Erin Stulb and Barbara Douglass, and both women are DYNAMITE. The stars are aligning quite well to make this an all-star production.

Stoneham Theatre
Seminar, by Theresa Rebeck, directed by Weylin Symes
395 Main St., Stoneham, MA
Sept. 12 – 29, 2013
I also read this play this summer, and I was captivated by how much Theresa Rebeck has grown as a writer. I was an eager fan from her early works (Spike Heels jumps out as a favorite, despite its clunky writing), but Seminar took things to a new level. While I have never reviewed Stoneham Theatre, they are consistently regarded as a professional regional theatre company producing top-notch works. I’m going on a whim saying that this production may be award-winning for its direction and perhaps some of its actors, but don’t quote me!

Emerson Umbrella Company
Red, by John Logan, directed by Rebecca Bradshaw
Emerson Umbrella Center for the Arts
Sept. 27 – Oct. 12, 2013
Finishing out September is Red. I think I am finally ready to review another production of Red (after a stunning turn by Speakeasy in early 2012), and I could not pick a better company to tackle it. I have wanted to see a production at Emerson Umbrella Company for some time now, and they have made some bold choices this season (look for later “Must Sees” for October and November). Also, they found two strong male actors who can carry this show, particularly Ryan MacPherson. This young talented actor has done some commendable work recently, and I wouldn’t be surprised if you hear (and see!) more amazing work from him this season. He might just save Ken for me, after I was disappointed with Speakeasy’s Ken in 2012.